Presenting the IPCC, for Star Wars. In the annals of science communication, this might go down as one of the more unique ways to communicate climate change. 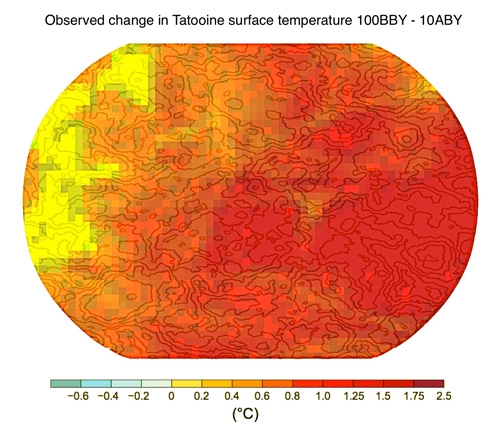 A map showing how much of Tatooine has warmed.
Credit: David Ng/TIPCC

The IPCC is short for the Intergovernmental Panel on Climate Change, an international body of scientists who have written five definitive reports on climate change since 1990. Star Wars, well, you’ve probably heard of it.

They might seem like strange bedfellows, but not for David Ng, a professor at the University of British Columbia. Ng has used Tatooine, Star Wars’ desert planet that’s home to Jabba the Hutt, as an example in class to explain radiative forcing, a key concept to understand how greenhouse gases heat the Earth (or any other planet, fictitious or otherwise).

Of course next logical step was to stretch out that class lesson into a report that mimics the latest IPCC report released earlier this year. What resulted was Tatooine IPCC (TIPCC), which has graphs showing how Tatooine’s climate has warmed and projections for future warming going out 100 ABY (After the Battle of Yavin, obviously). There’s even a graphic that shows the maximum velocity that different species can move to adapt to the changes ongoing on Tatooine.

The reason for constructing a fake report about a fake planet? Ng writes in Science Communication Quarterly:

Well, firstly, this stands as an admittedly elaborate teaching prop; but secondly, I hope this document entices folks to learn more about the real IPCC report. I get the sense that very few people have even heard of the IPCC, and maybe this even includes yourself. Which is a shame because it’s kind of important.

Take a look at the TIPCC in full below to see if you think the force is strong with this idea. And consider Ng’s advice to check out the latest IPCC report.