LONDON – U.S. scientists have worked out how to get 33 percent more power from an offshore wind farm – stagger the turbines rather than line them up in neat, orderly rows.

Cristina Archer of the University of Delaware and colleagues report in Geophysical Research Letters that they started with a real, working offshore wind farm – Lillgrund in Sweden – and then, using computer simulations and real weather data, hypothetically arranged the turbines to achieve the optimum results. 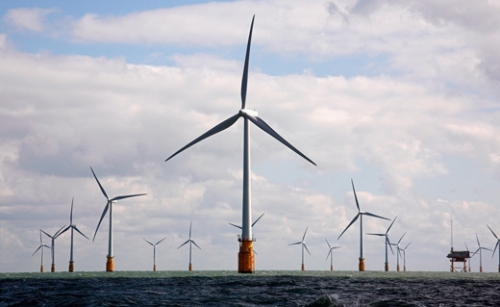 Researchers found that spacing out and staggering the location of wind turbines generated the most power.
Credit:Nuon/flickr

The problem is a real one. In April, two U.S. scientists calculated that spacing set practical limits to wind power: the impact of air on turbine blades set them turning but also set up eddies that took the wind out of the sails of the turbine downstream.

Land costs are huge, so there is a limit to the possibilities of spacing for onshore wind farmers. But offshore farms can spread themselves a little more comfortably. Dr. Archer and her colleagues tried six simulated configurations, sometimes keeping the turbines at the same distance, sometimes further apart, and sometimes staggering them according to the prevailing wind, in the way theatre seats are staggered to give everyone a better view of the stage.

It was a combination of the two approaches – more generous spacing, and a staggered alignment – that gave the best results. In general, they argue, the right placement and arrangement could improve energy yields by 13 percent to 33 percent.

It all boils down to having the right attitude. Last year, in a display of the power of positive thinking, Dr. Archer and a colleague from California calculated that wind turbines could deliver half the world’s energy demands by 2030 with minimal environmental impact. This would require 4 million turbines at 328 feet above ground level in all the windiest places.

Not everybody agrees: others argue that wind energy in particular cannot match coal, oil or nuclear, because the ratio of power to unit area is so much lower. A few days ago, commentators warned in Nature Geoscience that a world driven by renewable energy would create an enormous demand for metals and minerals – and energy to extract them.

But Dr. Archer isn’t the only researcher at the University of Delaware to take a distinctly optimistic view of renewable resources. In January a different team from the same institution reported that a combination of wind power and solar energy could keep the U.S. grid supplied around 99.9 percent of the time.