Spring is finally — finally — here. That word is music to the ears of those in the eastern United States who are ready to thaw out from the frigid winter. But that thaw could bring flooding to parts of the Midwest and the northern Plains, the National Oceanic and Atmospheric Administration said in its official spring outlook, released Thursday.

Conversely, in the West, where a persistent drought has kept most of California firmly in its grip, the spring looks to bring more of the same: warm, dry weather, which bodes ill for any drought relief and for the upcoming wildfire season. 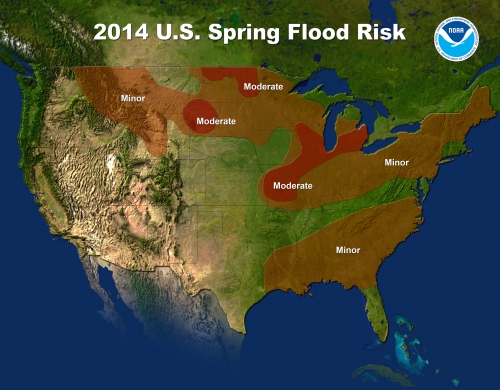 Winter, as anyone who lives between Minneapolis and Boston knows, has been a particularly cold and snowy one in the eastern half of the country (though globally the period from December to February was the eighth warmest on record). Winter’s grip could continue into spring, with below-average temperatures expected across much of the North because of the influence of the snow on the ground and the ice covering rivers and lakes.

“Today is the official beginning of spring, however much of the United States is still in a deep freeze,” Robert Hartman, acting director of NOAA's Office of Hydrologic Development, told reporters during a press conference on the outlook, which covers the period from April through June.

The snowpack in many areas has been above average and ice has formed in many rivers and lakes — the Great Lakes reached a near-record level of ice cover on March 6, when 92.2 percent of the water surface was frozen over. As temperatures warm with the onset of spring, that snow will melt and could cause flooding in parts of southern Wisconsin, southern Michigan and portions of Illinois, Indiana, and Iowa, NOAA said, as well as parts of North and South Dakota. More broadly, the northern tier of the country from Idaho to Missouri to Maine, as well as the Southeast, are at a minor risk of flooding.

Also adding to the flooding risk is the deep layer of frozen soil that the frigid winter has put into place. When the ground is frozen, it can’t absorb as much water when spring’s rains fall or if winter’s snows melt quickly.

Ice jams are another concern in parts of the Northern Plains and Alaska. These jams are just what their name suggests: Ice gets pushed together in rivers and can form a dam across waterways, causing localized flooding.

The onset of potential flooding is being delayed into April this year because of the expected cooler-than-normal temperatures. NOAA is particularly concerned about flooding because “flooding is the leading cause of severe weather-related deaths,” Harman said.

In the West, the spring won’t bring the same sense of relief, as warmer-than-average temperatures are expected to continue and the drought is expected to persist and possibly even intensify.

This winter was California warmest and third driest on record, Jon Gottschalck, the acting chief of the Operational Prediction Branch at NOAA's Climate Prediction Center, said during the press call. And as the wet season ends at the end of March, the hopes for any relief evaporate.

“They have passed their key months for being able to recover,” said Deke Arndt, chief of the Climate Monitoring Branch at the National Climatic Data Center.

The continued drought in California sets up a potentially dangerous wildfire season, and will continue to be a major source of pain for farmers as it taxes crops and livestock, with associated economic ramifications.

The spring is expected to relieve the less intense drought conditions in Washington, southeast Idaho, extreme northern and coastal Oregon, western and central sections of Nebraska and Kansas, central Oklahoma, and the Midwest. But drought could develop in parts of Arizona, New Mexico and Texas where it is not already strong, Gottschalck said.

What the precipitation outlook looks like for the rest of the country is much less certain. “Unfortunately for precipitation, climate signals are very weak and unreliable,” Gottschalck said.