Snow! Or Not. Why Snow Is Hard to Forecast

Maybe you saw the maps making the rounds on Twitter and elsewhere on the web: “Snow!” some shouted. Inches of it blanketing the Northeast this weekend, thanks to a brewing storm.

Maybe you also saw the responses from seasoned meteorologists warning those projections should be taken with a healthy grain of rock salt. 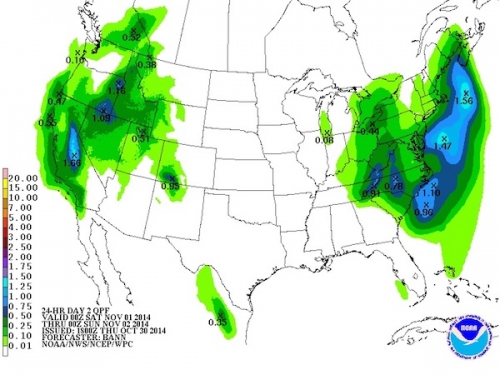 Possible precipitation (including chances of snow in some areas) due to a storm brewing off the East Coast this weekend.
Click image to enlarge. Credit: NOAA/NWS

The reason, of course, is that the forecasting of when, where and how much snow falls is difficult to accurately pin down, particularly several days in advance. But why is that?

Some of the difficulty comes from the inherent uncertainty involved with any forecast more than about 4-5 days out, meteorologists say. On top of that, precipitation is trickier to forecast than temperature trends, with snow being a particularly finicky precipitation that requires the right combination of factors.

“Everybody likes to dream of a big storm,” said Steve DiRienzo, a meteorologist with the National Weather Service Office in Albany, N.Y., who said with a hint of exasperation that they had been fielding calls about the potential snow since last weekend.

In general, it’s hard to make specific forecasts for things like snow events, especially the further away from the event you get. “There’s more that can go wrong” within the models that guide those forecasts, said Bob Oraveck, a lead forecaster with NWS’s Weather Prediction Center in College Park, Md.

A lot of what can happen with a given day’s weather, especially when something like a snowstorm is involved, depends on the little details that can have big effects over time. If the model has one of those little details wrong at the beginning, its projection of what will happen several days out can become more and more off base.

“The skill in the details gets worse and worse with time,” Oraveck told Climate Central.

Some of this has do to inherent limitations. Models are run using current atmospheric conditions, gathered by sampling efforts like weather balloons launched from NWS offices to see what’s happening in the atmosphere at a certain time. But those sampling efforts don’t cover the whole planet, and the Earth’s atmosphere is a large, interacting system — what’s happening on the West Coast today will affect the East Coast a few days later, for example.

“If we could sample the entire globe perfectly, we’d have a perfect forecast,” Oraveck said. But meteorologists can’t do that, so they’re left with the imperfect simulations they can get.

Those issues aren’t unique to snowstorms though, as a forecast for summer rains can easily go bust. There’s just something about snow that makes people sit up and pay attention in a way they might not during balmier times of the year.

“It becomes more visual when it’s snow,” Oraveck said. “You don’t really notice it as much when it’s rain.”

Rain on its own can even be a pain to forecast compared to high and low temperatures, in part because of  “the scale of the phenomena that you’re forecasting,” Oraveck said. You may know it’s supposed to be colder than average over the entire eastern half of the country and that there’s some potential for snow over some part of it, but “the actual size of the precipitation area is going to be smaller than the” below-temperature area, he said, and smaller areas are always harder to resolve in models and forecast for.

Also, “it takes the right combination of atmospheric events” just to get precipitation to fall, “but then it has to be cold enough for snow,” DiRienzo said.

In the dead of winter, that’s not an issue. But late October-early November “is a transition time,” DiRienzo said. “So you’re always unsure about how cold it’s going to be.”

And it doesn’t just need to be cold at the ground: the whole temperature profile of the atmosphere is key. “It’s critical because if you have any warm layers in there you can end up with more mixing and even rain,” said Eric Schwibs, a meteorologist at the NWS office in Portland, Maine.

The ocean is also warmer this time of year, mitigating temperatures, especially near the coast, and the ground isn’t frozen yet, making it harder for any snow that does fall to stick.

At a transition time of year like this, where snow falls and sticks is often dependent on elevation, with snows more likely to fall on mountains than on the valleys between them. Lakes can also ramp up snowfall — the infamous eponymous lake effect — by providing more moisture. So snowfall amounts can be highly localized.

A slight change in temperature or location then can mean the difference between several inches of snow, a mix of snow and rain, or just a cold, soggy day.

So all that said, you probably still want to know what’s going to happen this weekend, huh?

This won’t be a surprise if you’ve paid attention, but that’s still somewhat up in the air. Each run of the weather models has been pushing the low-pressure center at the heart of the storm further out to sea, making snow less and less likely for much of the Northeast.

Meanwhile, up to a foot of snow coming to the mountains of NC. Get ready for #snOMG video. pic.twitter.com/oLyTdDO5Oy

But if model runs today and tomorrow shift the storm back to the coast, then the picture could change. Essentially, the storm’s track is “critical,” Schwibs said.

Of course, snow isn’t the only hazard the storm could produce. It is expected to affect weather from Atlanta to Maine, and will bring high winds to some areas and much colder temperatures than have been in place in recent days. It could also bring coastal flooding and high waves at sea, DiRienzo said.

“It’s a very big, powerful storm. I think it bears watching,” he said. “So we’ll have to just see what happens.”