The 5,000 North Carolinians who call Hyde County home live in a region several hundred miles long where coastal residents are coping with severe changes that few other Americans have yet to endure.

Geological changes along the East Coast are causing land to sink along the seaboard. That’s exacerbating the flood-inducing effects of sea level rise, which has been occurring faster in the western Atlantic Ocean than elsewhere in recent years.

New research using GPS and prehistoric data has shown that nearly the entire coast is affected, from Massachusetts to Florida and parts of Maine. 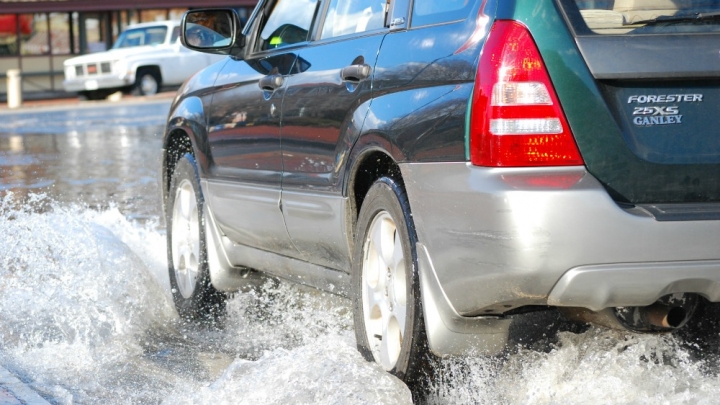 The study, published this month in Geophysical Research Letters, outlines a hot spot from Delaware and Maryland into northern North Carolina where the effects of groundwater pumping are compounding the sinking effects of natural processes. Problems associated with sea level rise in that hot spot have been — in some places — three times as severe as elsewhere.

“The citizens of Hyde County have dealt with flooding issues since the incorporation of Hyde County in 1712,” said Kris Noble, the county’s planning and economic development director. “It’s just one of the things we deal with.”

On average, climate change is causing seas to rise globally by more than an inch per decade. That rate is increasing as rising levels of greenhouse gases in the atmosphere trap more heat, melting ice and expanding ocean waters. Seas are projected to rise by several feet this century — perhaps twice that much if the collapse of parts of the Antarctic ice sheet worsens.

Ocean circulation changes linked to global warming and other factors have been causing seas to rise much faster than that along the sinking mid-Atlantic coastline — more than 3.5 inches per decade from 2002 to 2014 north of Cape Hatteras in North Carolina, a recent study showed.

The relatively fast rate of rise in sea levels along the East Coast may have been a blip — for now. The rate of rise recorded so far this century may become the norm during the decades ahead. “Undoubtedly, these are the rates we’re heading towards,” said Simon Engelhart, a University of Rhode Island geoscientist.

Engelhart drew on data from prehistoric studies and worked with two University of South Florida, Tampa scientists to combine it with more modern GPS data to pinpoint the rates at which parts of the Eastern seaboard have been sinking.

Their study revealed that Hyde County — a sprawling but sparsely populated farming and wilderness municipality north of the Pamlico River — is among the region’s fastest-sinking areas, subsiding at a little more than an inch per decade.

Taken together, that suggests the sea has been rising along the county’s shorelines recently at a pace greater than 4.5 inches per decade — a globally extraordinary rate. Similar effects are playing out in places that include Sandy Hook in New Jersey and Norfolk in Virginia, the analysis shows. 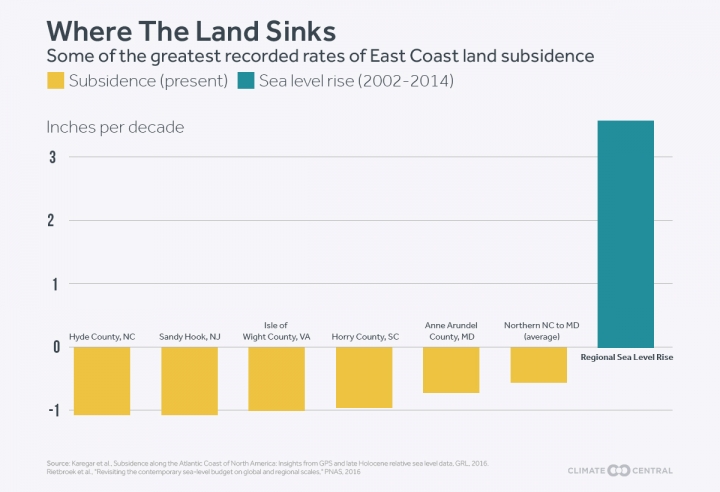 Gloucester Point, Va., which is home to the Virginia Institute of Marine Science, was also found to be sinking at a similar rate. Scientists there have been “noticing impacts,” said Carl Hershner, a wetlands expert who has worked at the institute since 1971. “Flooding in our boat basin is one piece of evidence.”

An inventory of wetlands and shorelines is being developed by the institute that may help reveal the impacts of subsidence and sea level rise locally. “There’s rather compelling evidence of marshes losing area,” Hershner said.

The main cause of East Coast subsidence is natural — the providential loss of an ice sheet. Some 15,000 years ago, toward the end of an ice age, the Laurentide Ice Sheet stretched over most of Canada and down to modern-day New England and the Midwest. Its heavy ice compressed the earth beneath it, causing surrounding land to curl upward.

Since the ice sheet melted, the land beneath it has been springing back up. Like a see-saw, that’s causing areas south of the former ice sheet to sink back down, including Maryland, Virginia and North Carolina.

The data suggests that some land in coastal Maine, New Hampshire and Massachusetts, on the other hand, is rising slightly, although not quickly enough to keep up with the global rate of sea level rise.

The study shows that subsidence is occurring twice as fast now than in centuries past in a hot spot from Fredericksburg, Va. south to Charleston, which the scientists mostly blame on groundwater pumping.

“If you draw down your aquifer, the land above the aquifer kind of collapses,” said Timothy Dixon, a University of South Florida professor who helped produce the study. “If that happens to be on the coast, that can also increase your flood potential.” 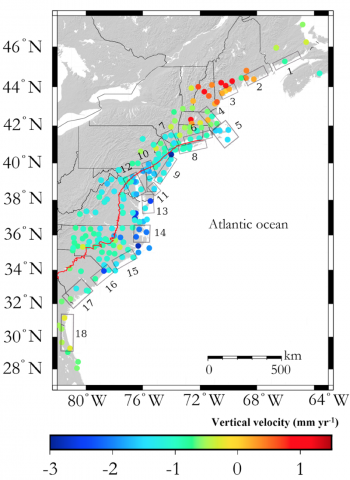 In areas south of Virginia, groundwater levels appear to have been recovering this decade as well pumping has been reduced, slowing the subsidence problem. Virginia says it’s working on the problem.

“In most places, you wouldn’t notice it; it wouldn’t matter,” said Jack Eggleston, a U.S. Geological Survey scientists who has researched the effects of groundwater pumping on the region’s topography. “But in terms of practical effects and practical problems, it does matter when you’re right on the shoreline.”

The compounding problems of land subsidence and sea-level rise have been pronounced in states where legislatures led by conservative majorities have been reluctant to discuss sea level rise and have been dismissive of the science behind climate change.

The Tar Heel State’s legislature drew criticism from climate scientists and others in 2012 over a new law that barred state officials from basing regulations on sea-level rise projections until mid-2016.

“There’s a strong level of denial about the existence of the problem,” said Pricey Harrison, a Democrat in the North Carolina assembly who opposed the bill. “You can’t talk about climate change, you can’t talk about sustainability if you want any legislation to move.”

To help win support for the bill from Democrats, it was amended to require the state to refine sea level rise projections that were first published in 2010. After lawmakers approved the legislation, then-Gov. Bev Perdue, a Democrat, allowed it to become law without her signature.

The science panel report concluded that tides could rise by 6 to 11 inches over 30 years in northern parts of the state if greenhouse gas pollution rates continue, or an inch less than that if they’re substantially reined in. The estimate included projections for land subsidence and rising seas. In the state’s southeast, the panel projected a rise of 4 to 9 inches.

Even without future warming, high tide flooding is already getting worse along the East and Gulf coasts, where subsidence and erosion are rife. The problems become most plainly clear during king tides. 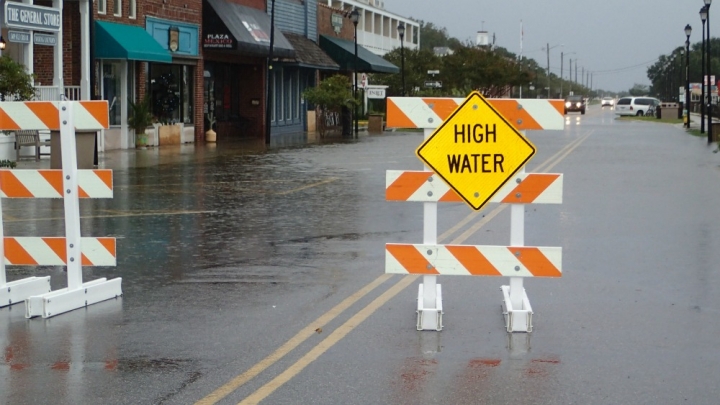 King tide flooding in Beaufort, N.C. in the fall of 2015.
Credit: King Tides/Flickr

“We can have up to 4-foot tides,” said Christine Voss, a University of North Carolina, Chapel Hill ecologist involved with a project that’s documenting the effects of king tides. “People are noticing that these flooding events are occurring more frequently, and perhaps with greater depth of inundation.”

Although the state is barred from basing any regulations on the new projections before the summer, the estimates are available for counties and local cities, which are not directly affected by the 2012 law.

During the decades ahead, those local planners will be grappling with the profound global crisis of sea-level rise — along with natural and human-caused factors that intensify its damages.

By late century, global sea level rise could be so rapid as to make the local effects of subsidence seem trivial, particularly if current pollution levels continue, which recent research has shown could trigger runaway melting in Antarctica.

“Rates of local subsidence may be important now,” said Andrew Ashton, a Woods Hole Oceanographic Institution scientist who researches changes in coastal environments. “But they’d be swamped by sea level rise for most projections by mid-century.”

The challenges that lie ahead threaten to swamp towns, farms and wilderness areas, and to do so more quickly along the Eastern seaboard than in other regions.

For most of the coastline, adapting to the rapid changes ahead may require expensive projects — private and public works that construct or improve coastline defenses, such as seawalls, marshes and oyster beds, or that relocate homes and infrastructure out of harm’s way.

For some communities, that will mean confronting problems that had nary been imagined. For others, it may involve finding news ways to cope with old threats.

“We’re very active and very conscious about our water and where it pumps to, where it drains to,” said Noble, of Hyde County. “It’s just a way of life here.”