A weekend of violent weather left at least 18 people dead in Oklahoma and Arkansas from flash flooding and a string of tornadoes that ripped through the Oklahoma City metro area, which was still recovering from the devastating EF-5 twister that struck on May 20, killing 24. The extreme weather vaulted several locations into record territory for spring rainfall, after enduring two years of intense and costly drought conditions. The latest round of severe weather left much of the Central Plains and Mississippi River Valley reeling from an unusually rapid transition from drought to flooding. 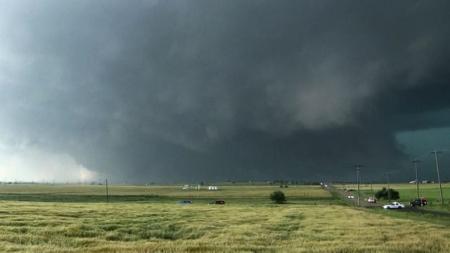 The extreme swings in precipitation may be connected, in part, to climate change, since the atmosphere is now carrying more moisture than it used to due to warming air and ocean temperatures. Climate studies have projected that precipitation extremes will become more frequent and severe, and some studies have already found an increase in heavy precipitation events across the Northern Hemisphere and in North America, including in the Midwest. Other studies have found that climate change is increasing the odds for certain extreme rainfall and flooding events.

On a weather map, Oklahoma appears to be divided into two states. Following multiple rounds of heavy rains and severe thunderstorms, central and eastern Oklahoma have erased the drought conditions that had parched the landscape since 2010. Yet extreme drought conditions continue to plague the more sparsely populated Oklahoma Panhandle.

The stark contrast between western and eastern Oklahoma are exemplified by the fortunes of Hooker, Okla., a community of about 2,000 located in the center of the Oklahoma Panhandle, and Oklahoma City. A weather station operated by the Oklahoma Mesonet in Hooker recorded just 0.08 inches of rain for the month of May, which was the second-lowest May total for that location since May 1916, when just 0.04 inches of rain fell. Records began there in 1906.

The Panhandle likely experienced one of its top five driest springs on record, said Victor Murphy, climate services program manager with the National Weather Service, in an email conversation.

In fact, the amount of rain that fell in Hooker during the entire month of May was equal to about the amount of rain that fell in Oklahoma City in just a few minutes on May 31, when a record 5.64 inches accumulated. That set a daily record for the date, and was the second-wettest day in May, as well as the sixth-wettest day on record for Oklahoma City.

Oklahoma City is only about 250 miles to the southeast of Hooker, and the city had its wettest May on record, with 14.52 inches of rain. It was also the second-wettest month of any month on record in Oklahoma City, coming in just shy of the 14.66 inches of rain that fell in June 1989. 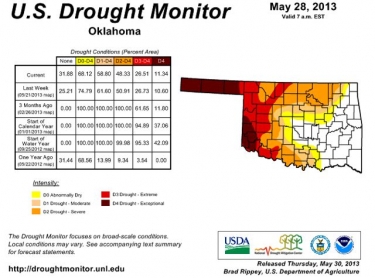 Drought Monitor map and statistics for Oklahoma, showing the lack of drought in the east, and the extreme drought conditions in the western portion of the state.
Credit: Drought.gov.

Oklahoma City also had its wettest spring on record, with 23.16 inches falling during the March-through-May period, smashing the previous record, set in 1947, by 3 inches.

The heavy rainfall in Oklahoma City on May 31 led to life-threatening flooding, with the Canadian River near Harrah, on the eastern side of the city, cresting at its second-highest level on record on June 1. According to the National Weather Service in Norman, Okla., there were 23 high-water rescues during the storm event on May 31 and June 1.

The severe thunderstorms and flooding came as an added shock to residents of the Sooner State, considering that parts of the state — including Tulsa — experienced their first May snowfall on record at the beginning of the month.

The heavy spring rains also extended into Arkansas and Iowa, two states that were also experiencing drought conditions. According to Harry Hillaker, the Iowa State Climatologist, this spring was the wettest in 141 years of recordkeeping. That is a sharp turnaround from the drought. As recently as October 9, 2012, 100 percent of Iowa was in severe drought or worse, Murphy said.  The number now? Zero percent. 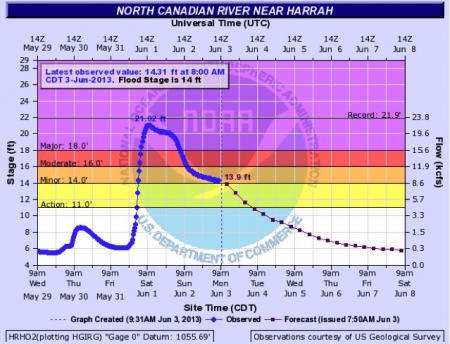 The widespread rains in the Midwest have led to widespread flooding along the Mississippi River and its tributaries, which is expected to continue through much of this week.

Because of the heavy rains in Iowa, the Mississippi River at Thebes, Mo, is expected to crest at 44 feet in about one week, which would be within 2 feet of its record, and the seventh-highest level on record. It's a remarkable reversal since as recently as August 2012, the water level was so low at that same location that the Army Corps of Engineers was forced to detonate underwater rock formations to keep the river open to barge traffic. The low-water conditions observed during 2012 came just one year after a separate round of major flooding.

Managing increased variability, with the climate lurching from dry to extremely wet and back again, is already putting a strain on businesses and municipalities that have to manage the consequences, from shipping companies trying to move their products along a shrunken or swollen Mississippi River, to farmers trying to figure out what to plant and when.

The 2012 drought in the Midwest and Great Plains cost the U.S. economy anywhere from $20 to $50 billion, based on various estimates that could still increase as longer-term damage is tallied.

Related Content
Ongoing Coverage of Historic Drought in U.S.
U.S. 'Weather Whiplash' Accounts for Billions in Losses
Wild Weather May be a Sign of Climate Change
Making Sense of the Moore Tornado in a Climate Context
A Year After Flooding, Commerce on the Mississippi Imperiled