A survey of nearly 100 experts on sea level rise reveals that scientists think there is a good chance the global average sea level rise can be limited to less than 3.3 feet by 2100 if stringent reductions in planet-warming greenhouse gases are rapidly instituted. However, the survey, which is the largest such study of the views of the most active sea level researchers ever conducted, found that if manmade global warming were to be on the high end of the scale — 8°F by 2100 — the global average sea level is likely to jump by between 2.3 and 3.9 feet by the end of this century.

Worse yet, such a temperature increase could boost sea levels by up to 9.9 feet by 2300, the study found. Such a drastic increase in sea level would not just put heavily populated coastal cities at risk of flooding, but could also jeopardize the existence of low-lying island nations, the study found. 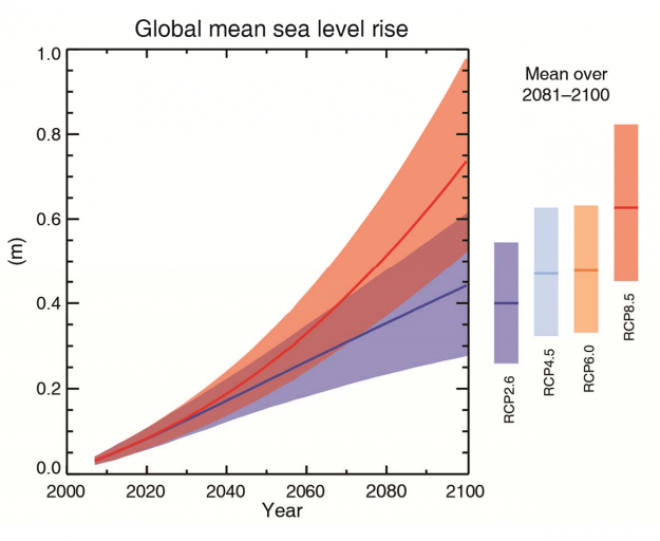 Projections of global mean sea level rise over the 21st century relative to 1986–2005 from the combination of the computer models with process-based models, for greenhouse gas concentration scenarios. The assessed likely range is shown as a shaded band.
Click image to enlarge. Credit: IPCC Working Group I.

The study, led by Ben Horton of Rutgers University and published in Quaternary Science Reviews, solicited sea level rise projections from the most active researchers in the field, scientists who had published at least six papers on the subject during the previous 5 years. Since computer modeling approaches and other methods have yielded a wide range of projections, a poll of expert opinions provided Horton and his colleagues a different way of estimating the odds of particular sea level rise scenarios.

The study’s projections overlap, but are generally higher than, the most recent report from the U.N. Intergovernmental Panel on Climate Change (IPCC), which raised its sea level rise projections by about 60 percent between its 2007 report and the assessment released in September.

Horton said there is broad agreement among sea level rise experts that if emissions are significantly curtailed beginning in the next few years, the amount of sea level rise could be limited. “If we can have mitigation measures to reduce GHG emissions we can keep sea level below a meter which is a rate that the vast majority of our coastlines can withstand,” Horton said in an interview.

However, the study found that scientists are especially concerned about the consequences of high-end warming scenarios.

“You get a group of scientists together and you find that they’re projecting a lot higher level of sea level rise,” Horton said in an interview. ”... The ranges now overlap with the IPCC, but they’re higher.”

For example, 13 experts who responded to the survey estimated a 17 percent chance that sea level rise would exceed 6.6 feet by 2100, which would have potentially catastrophic consequences for coastal cities like Manila in the Philippines, and U.S. cities such as Miami, New York, and New Orleans.

“While the results for the scenario with climate mitigation suggest a good chance of limiting future sea-level rise to one meter, the high emissions scenario would threaten the future survival of some coastal cities and low-lying islands”, said co-author Stefan Rahmstorf of the Potsdam Institute for Climate Impact Research.

This type of study peels back the curtain on sea level specialists, allowing the public to get a better idea of their views and giving policy makers the chance to assess various risk management approaches, the study said. 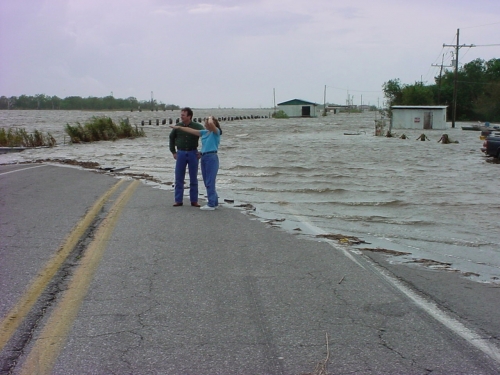 The IPCC’s four scenarios of the amount of greenhouse gases in the atmosphere through 2100 all show faster rates of sea level rise compared to that observed during 1971-2010, the report said.

The sea level rise scenarios in the recent report were considerably higher than those in the 2007 report, when the IPCC projected a global mean sea level rise of just 7.1 to 23.2 inches by 2100, and did not take into account the probable influence of the melting Greenland ice sheet and parts of Antarctica.

Because long-lived greenhouse gases like carbon dioxide (CO2) remains in the atmosphere at least for several hundred years, and because the oceans and ice sheets respond relatively slowly to global warming, multiple studies have pointed out that sea level rise will continue long after the amount of greenhouse gases in the air have stabilized.

This study also showed that some sea level rise experts are concerned about the possibility of extremely high long-term increases in sea level, on the order of up to 46 feet by the year 2300. Such massive fluxes in global mean sea level have been documented in Earth's history, but never when so many people were living along the shoreline. For example, the last time that the Earth had as much CO2 in the air as it does now was before humans existed, when global sea level was up to 100 feet higher than they are today.