Sea Level Rise Is On the Up and Up

Sea level rise is a game of millimeters a year, but those millimeters add up to a huge amount of water entering the world’s oceans. And the rising tide could eventually swamp cities around the globe.

With tide gauges distributed sparsely around the planet, scientists have turned to satellites to provide a global picture of sea level since the early 1990s. New research published on Monday in Nature Climate Change refines those satellite estimates and provides some good and bad news. The good news? Total sea level rise is lower than previous estimates. The bad news? Sea level rise rates are speeding up. 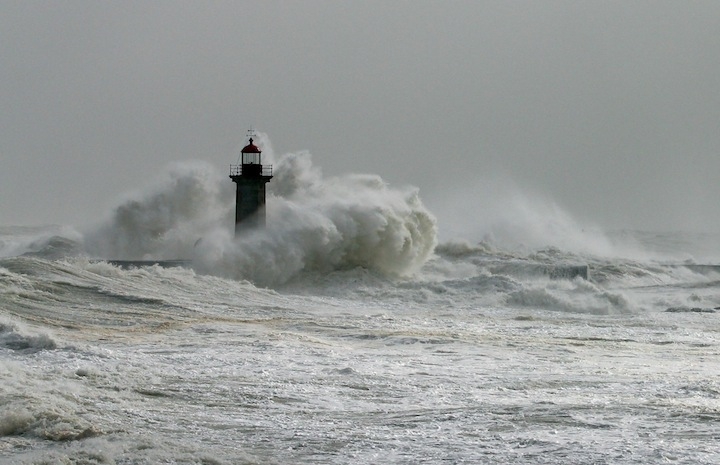 Christopher Watson, a geodesist from the University of Tasmania, led the latest round of research that adjusts satellite readings taken from hundreds of miles above the Earth to measure small changes in sea level heights around the globe since the early 1990s.

“What’s striking is its (the study’s) consistency with future projections of sea level in the IPCC,” Watson said. “Those estimates state that there could be up to 98 centimeters (39 inches) of sea level rise by 2100. We’re certainly tracking on that upper bound of the IPCC projection and that projection to 2100 has significant impacts.”

That’s because sea level rise isn’t just a linear problem, it’s one predicated on tipping points for major damage in coastal areas unless efforts are made to adapt. Currently more than 1 billion people live along shorelines around the world and $11 trillion in assets sit below the 100-year flood mark on coasts, though that number could balloon to as much as $210 trillion by 2100. Sea levels have risen by about a foot since 1900 and the rise is projected to continue accelerating into at least the next century.

Many coastal cities in the U.S. already stand at the precipice of regular minor coastal flooding because of sea level rise. Some cities such as Baltimore and Honolulu have already taken the leap, with coastal flooding 10 times more likely than it was in 1930. By the 2050s, sea level rise is likely to cross a tipping point for 26 major U.S. cities, which can expect at least 30 days of “nuisance flooding” each year.

On a major flooding level, the impacts of sea level rise are also becoming apparent in big storm surge events such as Sandy when it roared ashore in the Northeast in October 2012. Sea level rise has nearly doubled the risk of Sandy-level flooding since 1950.

Watson said the new estimates could help policymakers identify sea level rise hot spots around the globe. Protecting those and other places from inundation now could save trillions of dollars. In addition, the more refined measurements of current sea level rise will help make future projections stronger.

“The revised rates agree quite well with our estimates and rates of rise over past 20 years,” Carling Hay, a postdoctoral research at Harvard, said.

Hay authored another sea level rise study published earlier this year that also showed sea level rise is accelerating. Her analysis covers the entire tide gauge record going back to the early 20th century and shows that the recent acceleration is a function of overestimating sea level rise rates in the early portion of the 20th century. In comparison, rates since the early 1990s have been higher.

Watson’s new work looks at the satellite record since 1993 and suggests the rub is likely the instruments aboard satellites. While the study doesn’t specifically delve into causes for the underestimates, Watson said it’s possible that the different instruments used to measure sea levels might be slightly off.

By adjusting for those biases, Watson’s results are closer in line with estimates of how much water Greenland’s melting ice sheet is contributing on a yearly basis. In the future, the Greenland ice sheet as well as Antarctica’s massive stores of ice are likely to melt as the planet warms and contribute ever greater amounts of water to the world’s oceans. The melt of the West Antarctic Ice Sheet in particular may be “unstoppable” and is projected to add up to 13 feet of sea level rise, though its melt will take centuries.

You May Also Like:
Boom! Here’s What Thunder Looks Like
Warming Could Bring More Downpours Like OKC’s
MIT: ‘Massive’ Solar Expansion Critical for Climate
Hawaii Sets Goal of 100% Renewables by 2045