Scientists Seek a New Measure for Methane. Here’s Why.

There may be a significant problem with the measuring stick scientists use to account for how much methane is affecting climate change, according to a recent study led by researchers at Oxford University.

The long-term effect of methane emissions might appear to be a lot greater than it really is when compared to carbon dioxide in terms of both gases’ potential to warm the climate. The Oxford researchers suggest a new way to account for methane that highlights the considerable differences in how each gas turns up the atmospheric furnace. 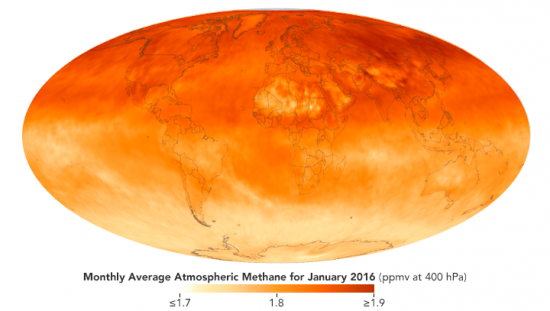 Atmospheric methane concentrations as observed from a satellite.
Credit: NASA

Methane is a powerful greenhouse gas, and the way scientists account for its climate impact is critical to the Obama administration’s efforts to regulate the energy industry’s methane emissions. It is also an important part of countries’ emissions reduction pledges under the Paris Climate Agreement.

Using so-called “carbon dioxide equivalents,” scientists commonly account for methane and carbon dioxide as if they are the same, and that has implications for how countries prioritize which climate pollutant to cut.

Should countries concentrate mainly on cutting carbon dioxide emissions, which will have the greatest long-term effect on the climate? Or, should they expend just as much effort cutting methane — a gas that affects the climate a lot more than carbon dioxide in the near future?

The answer may depend on when rising temperatures — fueled by human greenhouse gas emissions — are expected to peak and start falling, said Myles Allen, head of the Climate Dynamics Group at the University of Oxford and lead author of the study, published in May in the journal Nature Climate Change.

If they peak sooner, he said, the way most scientists account for methane might be fine — by discussing it in terms of global warming potential, or how much it might force the climate to change over the course of a century compared to carbon dioxide.

If the peak in temperatures comes later, some scientists say there’s a need to reinvent how methane is accounted for — by estimating how much surface temperatures will change in the future because of a single emission of methane, a calculation called global temperature change potential.

Thinking of methane in those terms will make methane and carbon dioxide look very different on paper, showing that methane has a less serious effect on the climate over the long term than it appears when using the traditional standard of measurement. 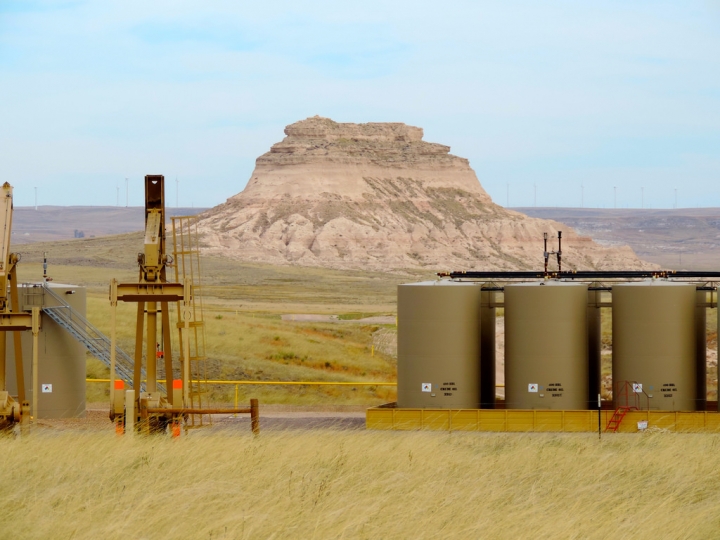 Methane and carbon dioxide have two things in common: They’re both composed of carbon, and they both heat the atmosphere. The difference? Carbon dioxide accumulates in the atmosphere and stays there indefinitely. Methane does not.

Emitting methane into the atmosphere is something like throwing kerosene on a fire. It warms the atmosphere a lot over a very short period of time — years to decades — but then it dissipates and its ability to heat the atmosphere dies down.

That’s why methane, along with black carbon and a few other chemicals, are called “short-lived climate pollutants.” They don’t stay in the atmosphere very long, but they may do a lot of damage in the near future, such as speeding the melting of ice sheets, which contributes to sea level rise, and polluting the air with ozone.

Carbon dioxide, by contrast, accumulates over centuries, warming the earth more and more as it mounts up. That means cutting carbon dioxide has a much greater effect on long-term climate change than cutting methane pollution.

A Question of Global Warming Potential

Global warming potential gauges the ability of methane and other greenhouse gases to force the climate to warm over the span of a century, but it tends to be most accurate over the course of 20 to 40 years.

For example, on May 12, when the Obama administration announced new regulations for methane emissions from the oil and gas industry, the goal was to reduce methane pollution by the equivalent of 11 million metric tons of carbon dioxide by 2025 — about the same as the carbon emissions from 2.34 million passenger cars.

Atmospheric methane has continued to rise, though the rate of the increase has varied over time.
Credit: NASA

Allen and other scientists say thinking of methane in terms of carbon dioxide equivalent muddies true long-term impact of methane and other short-lived pollutants.

Steffen Kallbekken, research director at the Center for International Climate and Energy Policy in Norway, said comparing methane and carbon dioxide masks how long it will take emissions cuts to make a difference in the climate.

Drew Shindell, a climate scientist at Duke University, said thinking of the two gases in terms of “equivalents” makes the ways they affect the climate seem ambiguous.

“The ambiguity comes from trying to make a metric for 'equivalence' when the various pollutants have very different residence times in the atmosphere, so are simply not equivalent to one another,” he said.

Writing in Carbon Brief this month, Shindell and five other scientists said they want to see policymakers quit quantifying all greenhouse gases in terms of equivalents because each gas affects the climate differently and cutting each of them requires a different emissions control strategy. 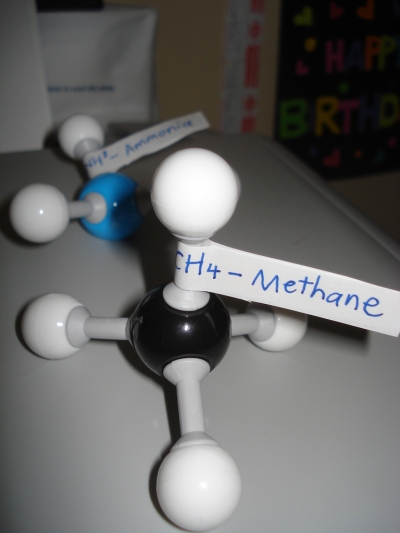 “The limitations with these comparisons against the impact of carbon dioxide are that they are valid only for a particular point in time (e.g. 100 years in the future),” and they don’t account for harm to air quality or other climate impacts, Shindell said.

He said he prefers different metric for greenhouse gas emissions, one that accounts for how much they warm the climate while also including the costs society incurs from climate change, including harms to public health from air pollution.

Allen said scientists don’t fully understand when global temperatures are likely to peak, and until they know more, regarding carbon dioxide and methane as equivalent is misleading because it assumes cutting both can stabilize the climate over the long term.

“It represents an ambiguous commitment to the future,” he said.

Climate policies often assume that the peak will come in the next 20 to 40 years, but it could come a lot later. Allen said the solution may be to think about methane in terms of global temperature change potential, which better captures methane’s small climate impact on temperatures over the long term.

Global temperature change potential is a measure of how much the earth’s average surface temperature might rise at a given point in the future because a metric tonne of methane was emitted somewhere on Earth. It assumes that methane doesn’t accumulate in the atmosphere like carbon dioxide does, and counts a cut in methane emissions only once — illustrating the how the two gases affect the climate differently.

“We make a specific recommendation in the paper, which is to keep them separate,” he said, referring to carbon dioxide and methane. “Don’t regard these things as equivalent. Recognize that you need to reduce carbon dioxide emissions to zero in order to stabilize temperatures.”