When he realized that Hurricane Sandy was on track for a direct hit on the New York metropolitan area, and that the storm would almost certainly be making landfall at high tide, Klaus Jacob went into high gear. “First,” he recalled nearly a year later, sitting in a bright, modern conference room near his office at Columbia’s Lamont-Doherty Earth Observatory, “I called my contacts at the MTA (New York City’s Metropolitan Transit Authority), and said ‘whatever you can do, do.’ ”

Jacob, a seismologist who used to worry mostly about earthquakes but who has expanded his portfolio to include climate change adaptation and disaster risk management, has been warning for years that the wall of water pushed ahead of a major storm could inundate low-lying areas of the city, fill subway tunnels with water and inflict tremendous economic damage on the region. He’s been so vocal, in fact, that he’s been labeled a “Cassandra” on the topic. 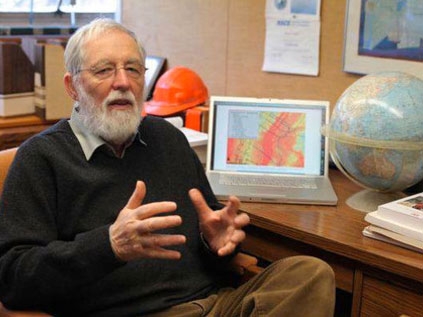 Now it was really happening, and as transit officials began moving trains out of harm’s way at Jacob’s urging, he sent an email alert about the likelihood of flooding to roughly 100 of his neighbors in the town of Piermont, N.Y., about 15 miles north of New York City, on the west bank of the Hudson River. “It’s my hometown forecast system, my private little undertaking for the benefit of the village,” he said. When a storm surge strikes from the sea, it pushes water up the Hudson — not just as far as Piermont, but all the way to Albany, nearly 150 miles further north.

After warning the neighbors, Jacob and his wife, Isabella, called the local rowing club to help deal with his own house. “We got them to help put the dishwasher on the kitchen table and move all the furniture upstairs, and when all that was done, I was so exhausted I went to bed,” he said. “I knew where the water would go within 6 inches and I slept through the whole thing. When I woke up in the morning, the water was gone and the mud was there.”

Hauling furniture upstairs, relocating subway cars to higher ground (as the MTA did on Jacob’s urging) and other emergency measures were all good things, of course, and ultimately saved New York millions of dollars — possibly hundreds of millions or even billions if you count the revenue that would have been lost if the city had ground to a halt for several weeks.

But this sort of reactive measure isn’t sustainable in the long term, as the rising seas that come with climate change increase the risk of devastating storm surges. If current projections about sea level rise are correct, Jacob said, “What we now call a 100-year flood will be reduced to a 2- to 5-year flood.”

Even now, a year after the storm, “I would say, by and large, that we are as vulnerable as we were the day before Sandy,” he said. “There is no fast fix.”

If New York wants to make its transportation system truly resilient against Sandy-like storm surges, Jacob said, “It will take many tens of billions of dollars, and it would take years in the order of one to two decades for that much money to be spent meaningfully.” 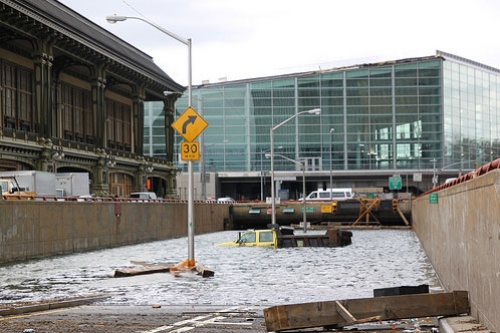 Asked to imagine what he’d do if given unlimited authority, Jacob had no trouble coming up with specifics. New York has many sectors that are vulnerable to floods, including power, communications and transportation — and transportation itself includes trains, subways, airports and roads. It would take hours to address them all, so Jacob focused just on the subway system.

“We start with the lowest lying and simplest problems,” he said. “We know where the water goes for smaller storms and for big storms. So let’s start at the lowest-lying areas (such as Lower Manhattan).”

Look at the sidewalks and you’ll see ventilation grates that allow air to circulate down and through the stations and tunnels. “If they’re in the flood zone then close them and build substitute ventilation systems. And here, right away, we’re talking about money,” Jacob said.

Then he’d build raised berms or levees around all the subway entrances in those areas, to keep floodwater from gushing down the stairs and onto the tracks. “Or you might come up with other engineering solutions, such as air and watertight gates, or even inflatable plugs that you put in the openings — but those things will have to work 100 percent of the time,” he said. “If only one of those doesn't work then it makes the others sort of futile.”

Once the lowest-elevation areas had been secured, Jacob would start again at slightly higher elevations. “Mother nature and topography give you the schedule of planning and implementation,” he said. “It’s as simple and straightforward as that. And the technology is not that farfetched.” It’s expensive, he acknowledged, but said “it’s even more expensive to leave things as they are.”

That would protect the subways, but streets and buildings would still be vulnerable, and while more elaborate measures are part of a climate resiliency plan released by the city last June — levees and floodwalls to keep the sea out entirely, artificial dunes to protect beaches in Queens and Staten Island and more — Jacob thinks such measures will ultimately be overwhelmed by the steadily rising seas. “It’s unsustainable, OK? It’s just not sustainable,” he said.

The only answer, he believes is to retreat — back from the sea and up from ground level. “Let’s take those tens of billions of dollars, and not invest in barriers, but instead make a fund by which people can start to retreat and get compensated for retreating, and remodel downtown Manhattan so that we abandon the lower floors of buildings. We connect the buildings with high lines so that people can walk from building to building and can look down into Wall Street where the geese float around in the water.”

It’s a visionary idea, at the very least, but it also raises one obvious question. If Jacob can see the rising threat of catastrophic floods so clearly, why did he choose to live right next to the Hudson River, where flooding isn’t all that unusual even today?

“My wife was really hooked on that area,” he said. “So I said, ‘OK, we buy a place but we raise the house.’ “ Unfortunately, it turned out that height restrictions in the local zoning code dictated that they could only raise the house by 6 inches. “Unless we would chop off the roof,” he said.

They opted to keep it.