One for the Record Books: 2014 Officially Hottest Year

It’s official: 2014 has taken the title of hottest year on record. That ranking comes courtesy of data released Monday by the Japan Meteorological Agency (JMA), the first of four major global temperature recordkeepers to release their data for last year. 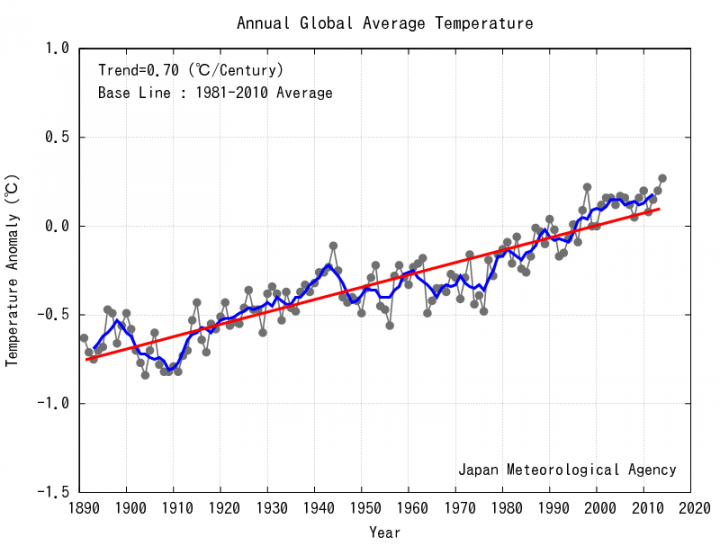 The upward march of the world’s average temperature since 1891 is a trademark of human-influenced global warming with 2014 being the latest stop on the climb. All 10 of the hottest years have come since 1998.

The average temperature was 1.1°F above the 20th century average according to JMA’s data. That edges 1998, the previous warmest year, by about 0.1°F.

One big difference between 2014 and 1998 is that the latter was on the tail end of a super El Niño, which has the tendency to spike temperatures. In comparison, 2014 was the year of the almost El Niño.

Instead, record warmth in other parts of the Pacific as well as the hottest year on record in Europe were some of the main drivers in fueling the heat. Joe Romm of Climate Progress also notes that heat in Australia early in the year and California’s hottest year further contributed to the heat.

A comparison of 2014, the hottest year on record, and 1998, the previous record holder.
Credit: JMA

Seasonal temperatures also paint a picture of a planet that didn’t get a break. Spring, summer and fall were all record-setting hot. Last winter was the only season not to set a record, and even that was still the sixth-warmest winter.

JMA is one of the four major groups that use both ground measurements and satellites to compute the planet’s average temperature. The other three include NASA and the National Oceanic and Atmospheric Administration in the U.S. and the Hadley Center in the U.K. There are subtle differences in how they analyze temperature data, but there’s generally broad agreement, particularly the upward trend in temperatures over the past century.

The other groups are expected to release their data in the coming weeks and confirm that 2014 was indeed the hottest year on record. And some scientists think it could get even hotter sooner. Strong trade winds in the Pacific have likely had a dampening effect on the global average temperature by essentially allowing the ocean to store more heat, but those winds are expected to weaken in the near future as part of a natural fluctuation.