Bitter cold and a chill wind inevitably mean the heat gets cranked up inside. And as the polar vortex parked itself over Canada and the northeastern U.S. to end 2013, that’s what people did.

Largely as a result of trying to keep warm from that Arctic chill, carbon dioxide emitted from burning energy in the U.S. increased 2.5 percent in 2013 over the previous year, according to the U.S. Energy Information Administration’s annual CO2 emissions report, released Tuesday. 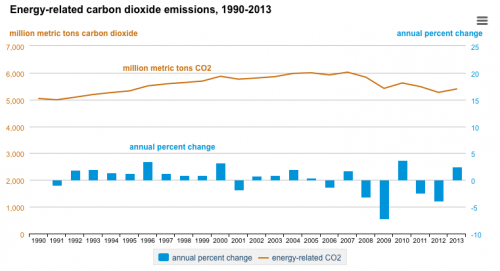 The spike in emissions from burning energy last year had less to do with the U.S. reversing a trend in declining CO2 emissions than it did with 2012 being unusually warm — the warmest year on record in the U.S., in fact.

“2012 was so warm, and then 2013 started returning to normal on its way to a chilly winter when you got to the end of the year,” EIA analyst Perry Lindstrom told Climate Central.

Even though the U.S. burned through more natural gas, coal and home heating fuel to stay toasty last year, CO2 emissions related to energy consumption were still lower than they were earlier in the decade when emissions peaked in 2007.

Overall, homes across the U.S. emitted 16 percent more CO2 from their energy consumption last year over 2012, according to the report.

Less use of coal to generate electricity contributed to lower CO2 emissions in 2012, the fifth year in a row that CO2 emissions from energy consumption declined. 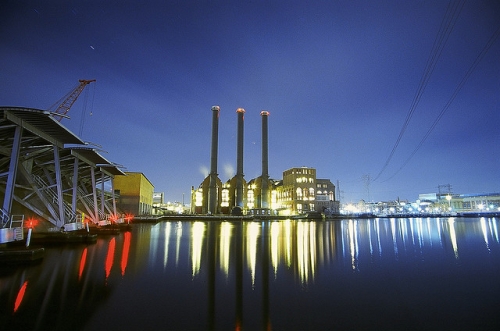 Even though CO2 emissions increased, the carbon intensity of the U.S. economy last year remained unchanged from 2012. Carbon intensity is a measure of how much CO2 is released into the atmosphere per unit of GDP.

The U.S. emitted 343 metric tons of CO2 per $1 million of GDP in both 2012 and 2013. In 2012, the total carbon intensity of the U.S. economy declined by 6.5 percent over the previous year — the largest drop since recordkeeping began in 1949 — mainly because the public has been eschewing coal for natural gas as a primary source of electricity.

It’s hard to draw long-term conclusions about 2013’s increase in emissions from energy use because many other factors will play into total CO2 emissions in the future, Lindstrom said.

Fuel efficiency and greater use of renewable energy are likely to reduce emissions in the future, and it may be likely that CO2 emissions will continue trending downward, the report says.

You May Also Like:
Hot News: 2014 On Track to Become Warmest Year
Winter Unlikely to See Repeat of Frigid Polar Vortex
Look Out Below: Antarctic Melting From Underneath
Sea Level Rise Making Floods Routine for Coastal Cities