The Planet Is Going To Have Its Hottest Year on Record

This year is in the pole position to take the title for hottest year on record and it shows no signs of slowing down.

August is the sixth month of the year to set a heat record, according to new data from the National Centers for Environmental Information (NCEI) released on Thursday. Five of those months also happen to be among the 10 most freakishly warm months that NCEI has ever recorded.

This year set a record for the warmest August on record.
Credit: NCEI

According to calculations NCEI performed using temperatures through July, this year had a 97 percent chance of being the hottest year on record, taking over the dubious title from 2014. That percentage will have to be revised upward with August’s new record.

“This continues a trend we’ve seen since the latter part of 2014 for a very warm temperature trend relative to history,” Deke Arndt, the head of NCEI’s climate monitoring division, said.

The reason this year’s record is so certain is because it’s been tracking record hot since January and has shown no signs of slowing down. In a graphic showing the six hottest years on record that Arndt likened to a horse race, it’s clear that 2015 is the American Pharaoh of global heat. The planet would have to seriously fall to the back of pack to not be the hottest year on record.

“We would have to see some really unusual cooling behavior. We’d have to spend at least a few months hanging out near the 20th century average and we haven’t done that since the 1980s,” Arndt said. 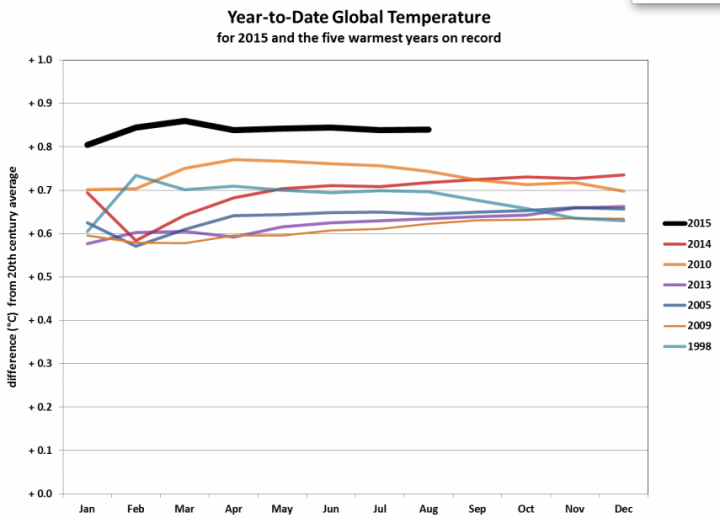 In a horserace for the warmest year on record, 2015 has held the pole position since January.
Credit: NCEI

This year has outpaced all other years from start to finish by riding on the back of record ocean heat. August set the record for the warmest ocean temperatures ever recorded, though land areas were also more than 2°F above normal for the month. Oceans are very slow to respond to temperature changes, which is in part why it’s so unlikely 2015 will lose the race for warmest year.

Decades of human-induced warming have gotten the planet to this point. It’s been 368 months in a row of above normal heat and it’s been more than 100 years since the planet had a record cold year. Arndt said El Niño is essentially helping the planet stand on its tippy toes to set a record.

With that El Niño expected to persist through at least the early part of 2016 and the continued influence of global warming, it’s possible that this year will also have a short reign as the hottest on record.

You May Also Like:
Warming Casts Shadow Over Oil Leasing on Public Lands
Arctic Sea Ice Hits Annual Minimum, 4th Lowest on Record
Odds Increasing That 2015 Will Be Warmest Year