The Next March Is All About Climate Change

For the second weekend in a row, Washington, D.C. will be home to people clamoring for policies based on science. But unlike the March for Science, this weekend’s People’s Climate March will be overtly political and put a sharp focus on climate change and justice.

The march builds on a 2014 landmark event that drew hundreds of thousands to the streets around the globe. Then, the push was for the world to deliver a climate deal, a goal achieved a year later in Paris. 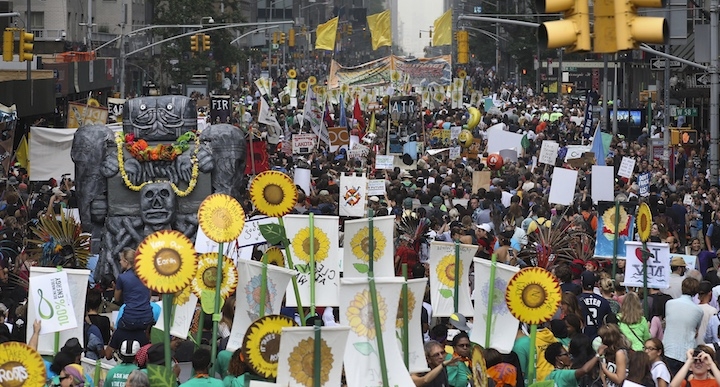 Hundreds of thousands turned out for the People's Climate March in New York, held in September 2014.
Credit: Climate Action Network/flickr

The climate action landscape has changed a lot since then, most notably by the election of President Trump. While some of his policies may be driving people to the streets on Saturday, Paul Getsos, the national march coordinator, said he wasn’t the initial impetus for the march.

“We were ready to be active with the next administration when we thought it was Hillary Clinton,” Getsos said. “Our steering committee was working together (last year) to figure out how to make the next president, who we thought was going to be Clinton, be bigger and bolder on climate.”

Nonetheless, Trump’s election has changed the focus a bit. Organizers and other climate advocates are now trying to prevent the U.S. from backsliding on its recent climate action progress.

The march is slated for Trump’s 100th day in office. Organizers chose the date because the first 100 days is a measuring stick for the president’s priorities. Executive orders aiming to roll back climate policies are among the few tangible goals Trump can point to.

One goal of the march will be to remind the president that those rollbacks don’t represent what the majority of Americans want when it comes to climate change. The march route will circle the White House, serving as a visual reminder to its occupants that the public is watching what happens within its gated grounds.

The march is focused on politics, but driven by science that shows climate change impacts are becoming increasingly clear even as the time to stave off the worst impacts is running perilously short. It’s the strongest link to the March for Science, which took place on Earth Day. 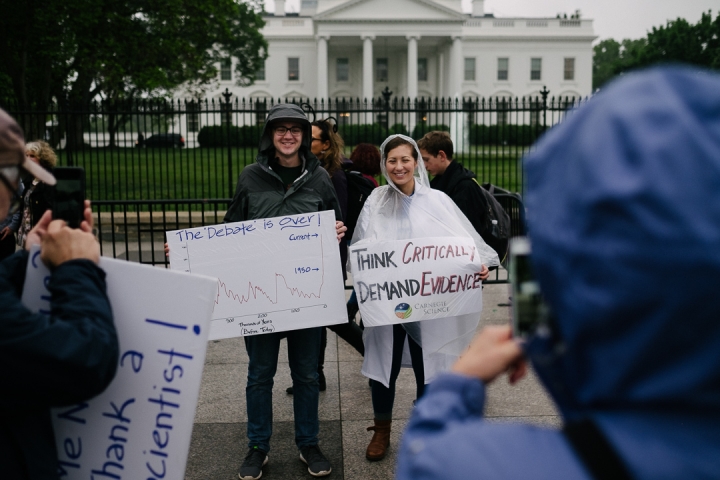 Scientists took part in the March for Science, with a number making a stop at the White House.
Credit: Brian Kahn

“Last Saturday, the public stood up in vocal support of scientists and science,” said Lucky Tran, who organized the March for Science and the 2014 iteration of the People’s Climate March. “This Saturday, scientists will stand with the public to amplify the voices of frontline communities that are experiencing the devastating effects of climate change firsthand.”

The Washington, D.C. march and 300 satellites events are expected to draw as many as 150,000, according to Getsos. While the number of people turning out is important to send a message, organizers are focused on what comes next.

“April 30 is more important than April 29,” Getsos said. “One of the goals of this week is to get people energized and excited and in relationships so they are going back to their community to take on fights and campaigns around climate and climate justice.”

In some ways, that represents a continuation of the work that happened after the first People’s Climate March in 2014. But it also reflects a growing reality that with the executive and legislative branches of the federal government currently led by Republicans, most of whom are opposed to climate regulations, organizers are going to have to turn to the local level over the next few years if they hope to score substantive climate victories.

Getsos said the march, coupled with pursuing local action, can serve not just as a springboard to making climate change a national issue in the 2018 midterms and 2020 presidential election, but also remind the world the U.S. isn’t giving up completely on addressing climate change in the interim.

“It’s important because it will communicate that there is a strong and vibrant climate community in the U.S. no matter who the president is, and we will hold them accountable,” he said.

You May Also Like:
Environmental Rules Played Minor Role in Coal’s Decline
California Got More Snow This Winter Than Past 4 Total
How Trump’s Monuments Review Could Impact Climate