Study: Panda Poo May Be Coup for Future of Biofuels

In panda poo could be the future of biofuel.

That’s the conclusion of research presented Tuesday at a meeting of the American Chemical Society in Indianapolis suggesting that bacteria in panda feces could help make biofuel production more efficient.

Researchers are trying to figure out how to produce ethanol from plants or parts of plants that are not used to make food because U.S. ethanol production from corn and soybeans has raised concerns that using food crops for fuel could rise food prices and lead to food shortages. 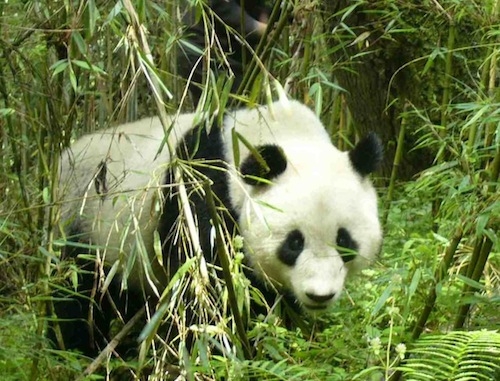 Today, in order to turn switchgrass and corn cobs into ethanol, the biomass has to be treated to break down tough lignocellulose material, which is extremely energy intensive to process.

That’s where the panda poo comes in.

Brown’s team has found more than 40 different microbes living in the guts of giant pandas at the Memphis Zoo that could help decompose the corn cobs and other tough plant materials so it can be more easily and efficiently processed to make ethanol.

The study is using the feces from giant pandas Ya Ya and Le Le. Pandas, which have a short digestive tract, feast on a diet of tough bamboo. Bacteria with extremely potent enzymes break down the woody bamboo efficiently and quickly.

“The time from eating to defecation is comparatively short in the panda, so their microbes have to be very efficient to get nutritional value out of the bamboo,” Brown said. “And efficiency is key when it comes to biofuel production — that’s why we focused on the microbes in the giant panda.”

Brown’s team found the specific bacteria that break down lignocellulose into simple sugars, which can be fermented into bioethanol, and they found other bacteria that can transform those sugars into oils and fats for biodiesel production.

The microbes in pandas’ guts are accessible via their feces and can easily be cultured, Brown said.

Harvey Blanch, professor of chemical engineering at the University of California-Berkeley, said he is skeptical that panda gut bacteria could be produced on an industrial scale to increase the efficiency of biomass processing for fuel.

“There’ve been a number of studies like this in the past,” he said. “One was bacterial enzymes from termite hind guts. Now we’ve got pandas. We’re a very long way from industrial applications.”

“The opportunity to commercialize is just not going to happen,” he said.

Brown said the researchers originally approached the panda gut microbes to find out how they were able to release enough nutrients to sustain the metabolism of a bear that lacks the enzymes itself to break down bamboo.

With fewer than 3,000 pandas remaining today, learning that a highly endangered species has a tremendous value for humans only helps in trying to save the species from extinction and illustrates why all species are important, Brown said.

“I think there is urgency,” he said. “It just aids to the conservation effort.”