In the summer of 2012, a series of punishing heat waves roasted a large portion of the U.S. with record-breaking temperatures that helped spawn one of the most widespread and costliest droughts to hit the country in decades.

Combined, the blistering temperatures and drought cost some $31.5 billion and led to dozens of deaths. The heat was so intense that it melted roads and airport runways. 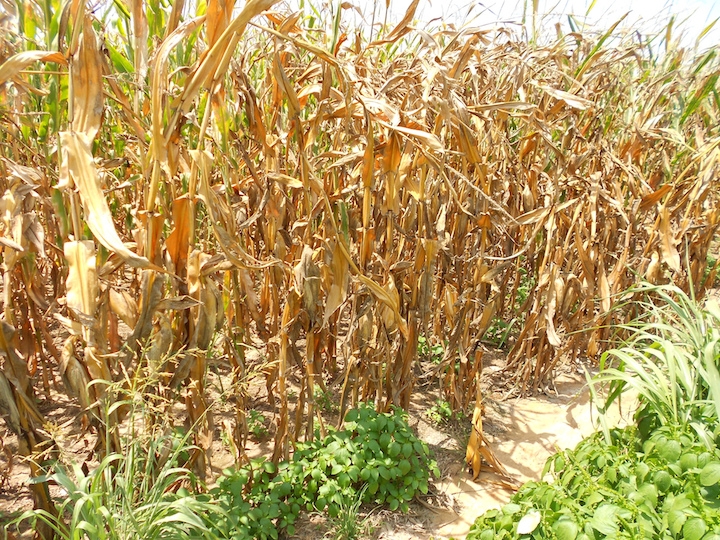 Drought-stressed corn at the western border of Kentucky and Tennessee during the widespread drought of 2012.
Credit: CraneStation/flickr

In May of that year, when the National Oceanic and Atmospheric Administration issued its forecast for the summer, it had predicted normal temperatures for the Midwest and Northeast — a forecast that clearly fell short.

Such seasonal forecasting is notoriously difficult, but a new study detailed Monday in the journal Nature Geoscience points to a way to potentially better predict the type of extreme heat that engulfed the country that summer.

By identifying a pattern of Pacific Ocean temperatures that seems to precede major heat events in the eastern U.S., the study could help forecasters give farmers, cities and utilities more time to prepare. Such early warnings will become more and more critical as the world continues to warm and heat waves become more frequent and more intense.

“It’s been very hard to get accurate, long lead-time prediction,” Noah Diffenbaugh, a climate scientist at Stanford University who wasn’t involved with the research, said. “This paper is kind of extending our potential to have this longer time-scale predictability.”

Karen McKinnon and her colleagues found the connection to Pacific Ocean temperatures by first looking at daily temperature data for the period from late June to late August from 1,613 weather stations across the U.S. going back to 1982. They divided the country into broad regions that tend to experience extreme heat at the same time. (A day with extreme heat was defined as one where the warmest 5 percent of weather stations in the region had temperatures at least 11.7°F, or 6.5°C, above average.)

They focused on the largest grouping to emerge, which spanned from the Midwest down into the Southeast and up the coast to the Northeast. That area coincides with major population centers, as well as key farmland.

The researchers then looked to see if those days of extreme heat tended to correspond with any particular patterns of sea surface temperatures in the North Pacific. One pattern “just popped up super clearly,” McKinnon, a postdoctoral researcher at the National Center for Atmospheric Research in Boulder, Colo., said. In an area spanning the breadth of the ocean basin and roughly the same latitudes as the U.S., they found cooler-than-normal waters to the north butted up against warmer-than-normal waters to the south. 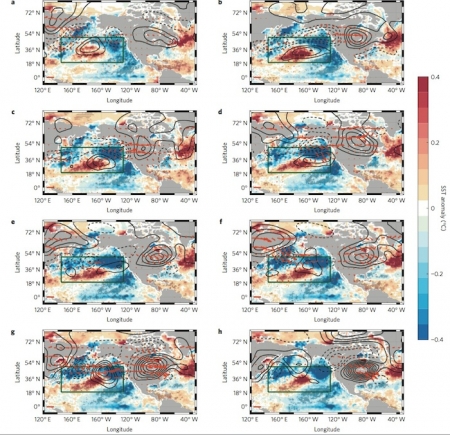 The evolution of the Pacific Ocean temperature pattern in the weeks and days before an eastern U.S. heat wave.
Click image to enlarge. Credit: McKinnon et al.

And not only did the pattern show up at the same time as the extreme heat in the eastern U.S., the team could trace it back in time to before the heat wave hit and use it to predict the likelihood of the extreme hot weather.

The researchers found the ocean pattern could be used to predict increased odds for extreme heat in the broad region up to 50 days out, with the skill of the predictions increasing closer to the event as the ocean pattern evolved.

The team used the pattern to do a “hindcast” of the punishing summer of 2012, and were able to predict increased odds of extreme heat for the end of June as early as mid-May.

The pattern could also be used to predict extreme heat for some individual stations, the team found, mostly in a region in the middle of the country. The clearer connection there is likely due to the fact that the domes of hot air associated with heat waves tend to be centered on that area, McKinnon said.

Exactly why the ocean pattern and extreme eastern U.S. heat are connected isn’t yet clear. The two main ideas, McKinnon said, are that the ocean pattern is influencing the atmosphere in a way that leads to the eventual heat dome buildup, or that both the ocean pattern and the heat dome are caused by some other third factor. McKinnon and her colleagues are working now with computer models to “try and tease apart a little bit more” what’s happening, she said.

One of the clearest implications of the overall warming of the planet as greenhouse gases trap more and more heat in the atmosphere is that heat waves will become more common and more intense, raising concerns about future impacts to agriculture, infrastructure and vulnerable populations. Such concerns could make long-term predictions particularly valuable in the future because “we can make decisions about how to manage risk,” Diffenbaugh said.

One hurdle to jump, though, is to try to use this ocean pattern to make forecasts in real-time “to see if it really works,” Michael Ventrice, an operational meteorologist with the Weather Company, said.

McKinnon and her team are planning to do just that this year, possibly starting sometime in April. 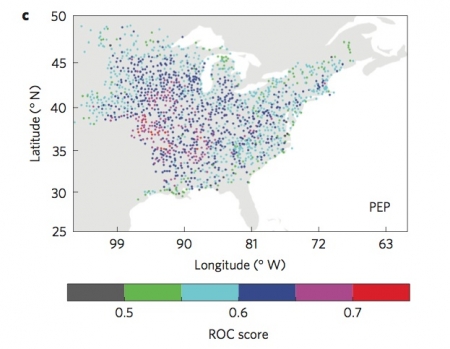 The area of the country where heat waves corresponded to a particular Pacific Ocean temperature pattern. The purple and red colors denote the individual stations that corresponded most strongly. Click image to enlarge. Credit: McKinnon et al.

Right now, the models that Ventrice and other seasonal forecasters use are predicting one of the hottest summers in recent years. The ocean pattern that McKinnon and her colleagues identified, though, is flipped, which would tend to suggest cooler summer weather.

“This is a good case study,” Ventrice, who was not involved with the research, said.

“Obviously it’s a little bit scary,” McKinnon said of doing real-time forecasts, because even if their forecast track record is good across many years, it could be off for a particular year. Other myriad climate factors play a role in the weather, and any one of them could overwhelm the Pacific Ocean connection.

While there’s still work to do to understand and firm up the link between extreme heat and Pacific Ocean temperature patterns, the possibility is intriguing because “we’re always looking for better ways” to extend seasonal predictions, Ventrice said.

You May Also Like:
Climate Change Is Coming For Your Maple Syrup
If a Power Plant Is Built in U.S., It’s Likely to be Renewable
Renewable Energy Investments Set a Record in 2015
California Snowpack Returns, But Fears Held For Future