More than 90 percent of people living in European cities breathe air that the U.N.'s World Health Organization (WHO) says leads to respiratory problems, heart disease, and shortened lives, according to a study published on Tuesday.

But because EU legal limits or targets for some pollutants still lag well behind U.N. recommendations, most countries have been able to downplay the hazards of dirty air despite evidence that it leads to 430,000 shortened lives in Europe every year and costs governments tens of billions of pounds in hospital admissions.

Phasing out leaded gasoline has improved air quality in Europe but not as much expected in the last 10 years.
Credit: European Environment Agency

According to the European Environment Agency (EEA) study, the past 10 years have seen a steady decline in the emissions of most air pollutants, leading to “acceptable” levels across the continent for carbon monoxide and lead. “Nevertheless, road transport, industry, power plants and farming continue to emit significant amounts of pollutants … which leads to acid rain, loss of biodiversity, reduction of visibility and damage to materials and buildings,” says the report.

EU environment commissioner, Janez Potočnik, suggested he was ready to take countries to the European courts and fine them for consistently failing to meet targets. “Air quality is a central concern for many people. Surveys show that a large majority of citizens understand well the impact of air quality on health and are asking public authorities to take action at EU, national and local levels, even in times of austerity and hardship. I am ready to respond to these concerns through the commission's upcoming air policy review,” he said.

Potočnik was backed by EEA director, Hans Bruyninckx. “Large parts of the population do not live in a healthy environment, according to current standards. To get on to a sustainable path, Europe will have to be ambitious and go beyond current legislation.”

The difference between WHO recommendations and EU legal limits is seen most starkly with particulate matter, a pollutant made up of tiny particles of dust, dirt, and soot emitted from cars and factories, and low-level ozone, a dangerous gas formed by the reaction of sunlight with some pollutants. The WHO suggests 85-98 percent of Europe's urban population is exposed to dangerous levels of both but the EU says only 14-31 percent of people are exposed. Countries, including Britain, have consistently argued that Europe should not raise air pollution standards and have actively tried to delay implementing EU legal limits to avoid having to remove cars from roads or force industry to invest in better technology.

The study found that emissions had not reduced as much as expected in the past 10 years. “There have been several success stories in cutting emissions of air pollutants – for example, sulphur dioxide emissions from power plants, industry, and transport have been reduced over the last decade, reducing exposure. Phasing out leaded petrol has also reduced concentrations of lead, found to affect neurological development. 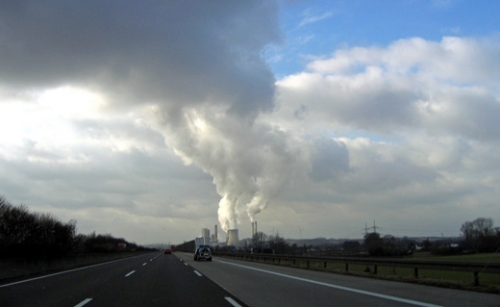 Power plants are just one of the sources of pollutants identified by the European Environment Agency report.
Credit: Flickr/Andreas

“But Europe's air pollution problem is far from solved. Two specific pollutants, particulate matter and ground-level ozone, continue to be a source of breathing problems, cardiovascular disease, and shortened lives. New scientific findings show that human health can be harmed by lower concentrations of air pollution than previously thought,” says the report.

It underlines the link between air pollution and global warming and urges countries to act on both together. “Pollutants like particulates and black carbon affect both rainfall and the way that clouds reflect sunlight, but also indirectly via the way they reduce the growth of vegetation which can act as a carbon sink. Air quality and climate change can be cost-effectively tackled together by using an integrated approach when defining policies and measures,” it says.

East European countries, including Bulgaria, Poland, and Slovakia, were found to be the most exposed to particulate matter, largely, it is thought, from coal and wood burning.

“Particulate matter remains a serious threat to health, because no threshold for PM has been identified below which no damage to health is observed. In western, central and eastern Europe it was 430,000 premature deaths,” it said.

Britain has seen dramatic improvements since 1990 in most air pollutants, the report found, including sulphur dioxide, volatile organic compounds, nitrogen oxides, methane, and carbon monoxide. Although there are many more cars, heavy industry has mostly ended and power stations and households have switched from coal to gas and other, cleaner power sources.

“The report confirms that Euro engine standards have successfully reduced emissions of oxides of nitrogen from road transport by an impressive 55 percent between 1990 and 2005 while countries like the UK have failed to respond to the sharp increase in nitrogen dioxide from diesel vehicles, which plagues cities like London,” said Simon Birkett, director of Clean Air for London.

The study coincides with a study in the Lancet respiratory medicine journal suggesting that babies born to mothers who live in areas with air pollution and dense traffic are more likely to have a low birth weight.

The researchers, who included a team from the UK, found that babies were smaller even in areas with relatively low levels of air pollution, well below the limits considered acceptable in EU guidance. Although they cannot establish from this research that air pollution is the cause of low birth weight, the authors of the study believe the link is strong enough to demand action.