As the main driver of climate change, the connection between burning fossil fuels and global warming is clear. But evidence shows they may be connected in another way — the physical footprint of oil and gas development on the landscape may not only contribute to global warming, it may also affect an ecosystem’s ability to withstand it.

New research shows that an area larger than the land area of Maryland — more than 11,500 square miles — was completely stripped of trees, grasses and shrubs to make way for more than 50,000 new oil and gas wells that were developed each year between 2000 and 2012. Such broad industrialization may harm the ability of some regions to recover from drought and damage the ability of the land to store carbon dioxide from the atmosphere. 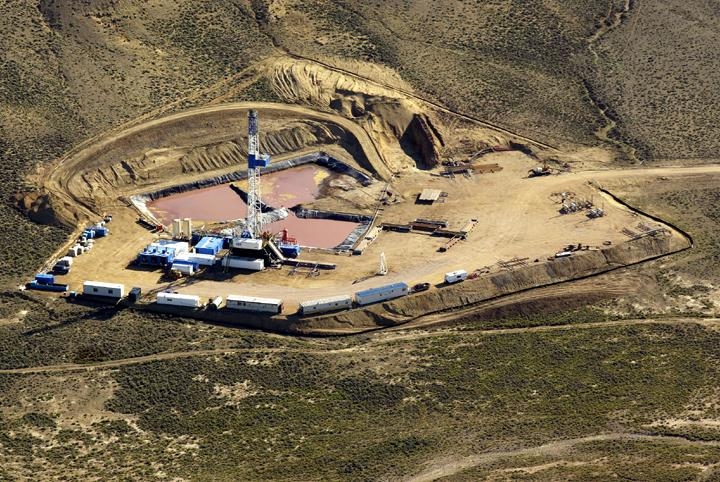 A typical oil and gas well pad in Wyoming, cleared of all vegetation.
Credit: John Amos/flickr

Most of the development studied was in the Great Plains and Rocky Mountains of the central U.S. and Canada, where drilling and fracking are creating “industrialized landscapes,” often in areas that are already drought stricken. That fast-spreading development is creating additional water stress while simultaneously damaging the ecosystem’s ability to absorb carbon dioxide and store or “fix” it in plants, according to the research — a study led by scientists at the University of Montana and published in the journal Science.

“When you think from a climate point of view, you’re not having carbon uptake across all this landscape for many decades when there’s very little plant cover,” study co-author Steve Running, a University of Montana professor who models ecosystem functions, said.

The plants and their carbon uptake help the landscape provide certain “ecosystem services,” including food production, biodiversity and wildlife habitat, all of which are severely degraded when the landscape is denuded by oil and gas development.

Grasslands and semi-arid regions are not nearly as carbon dense as forests, so on a global scale, loss of carbon storage in those areas because of expanding energy development doesn’t have much of an effect on global climate change, said Steve Polasky, a professor of ecological and environmental economics at the University of Minnesota who was unaffiliated with the study.

But fossil fuels development and loss of vegetation does have a big effect on how a region responds and adapts to a changing climate because of the water stress it creates where drilling is occurring.

Of course, oil and gas production isn’t the only land use that strips the land of vegetation. Urban sprawl, industrial agriculture and even the growth of renewable energy, especially solar, does that, too.

One of the ways oil and gas development worsens water scarcity in times of drought is the use of large quantities of water for hydraulic fracturing, or fracking, and subsequent rounds of fracking the same well, a process called “refracturing.” The study estimates that up to nearly 34 billion cubic meters of water were used for fracking and refracturing in the central U.S. and Canada between 2000 and 2012, enough water to fill more than 13 million Olympic-sized swimming pools.

As fracking and refracturing become more common to make wells produce more oil and gas, it adds to an already fraught competition among agriculture, aquatic ecosystems, and municipalities for water supplies, the study says.

“One way of thinking is, it’s sort of potentially accelerating a trajectory toward a drier environment,” David Schimel, a research scientist at NASA’s Jet Propulsion Laboratory, said. Schimel is a convening lead author of three Intergovernmental Panel on Climate Change reports and is unaffiliated with the Montana study.

Energy development also pushes out drought-resistant native vegetation possibly on both the land being drilled and the land around it, and it may not grow back as temperatures rise and droughts become more severe in a changing climate, he said. 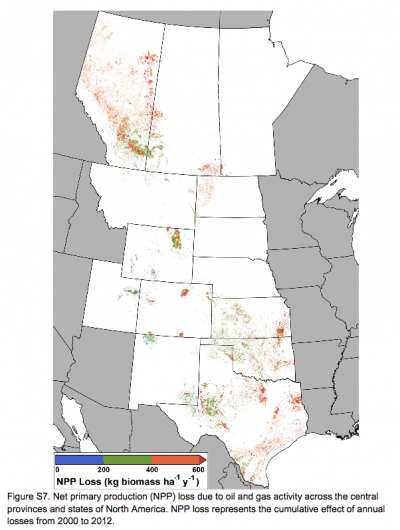 Map shows the entire area where oil and gas development has reduced the land's ability to fix carbon, measured in “net primary production,” which is the net amount of carbon fixed by plants and stored in biomass.
Credit: University of Montana/Science

Often, lands developed for oil and gas and other uses do not fully recover their previous ecosystem functions for decades or more, Schimel said.

“In shortgrass areas, you can still see where farms were abandoned during the Dust Bowl,” he said.

Until now, those landscape changes have never been studied on a national or international scale, Schimel said, adding that research suggesting a climate impact, either global or local, is “kind of a new thing.”

Polasky said that it’s important to account for landscape changes resulting from oil and gas development, but many other types of development alter ecosystems and the use of land, including urbanization and expansion of cropland.

Renewable energy development could have a similar effect on the land, with large solar farm construction often  scraping much of the land of vegetation as well.

The environmental impacts of alternative energy need to be balanced against the impacts of the energy they replace, such as fossil fuels driving global climate change, Schimel said.

“At least if a community decides to build a solar or wind energy plantation, you’re taking responsibility of the impacts within your own region,” he said. “When you use fossil energy, you’re affecting everybody (globally). There are no easy choices here.”