The depressing task of monitoring ocean acidification just got a little easier. A collection of scientists from Europe, the U.S. and India have developed a technique that could provide the first global and nearly real-time assessment of our rapidly acidifying seas. 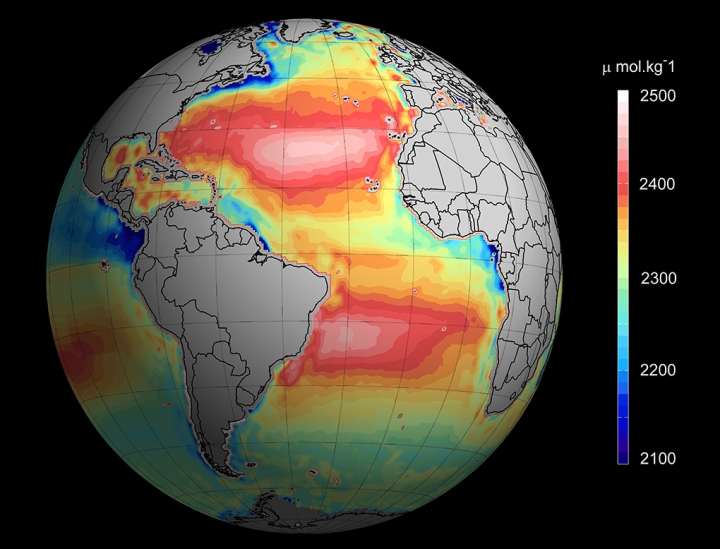 Their findings were published in the journal Environmental Science and Technology on Monday, showing how data from satellites that measure salinity and other ocean conditions could be combined to produce a whole new way of monitoring acidification. Currently, scientists rely on ship, buoys, floats and lab tests to track the data and although these disparate pieces can construct a baseline of acidification, there are gaps in coverage.

Oceans are taking in about 90 percent of the excess heat created by human greenhouse gas emissions, but they’re also absorbing some of the carbon dioxide (CO2) itself. According to the European Space Agency, about a quarter of all human CO2 emissions are being taken in by the world’s oceans.

A set of chemical processes dissolves that CO2 and turns it into carbonic acid and sets off a complex changes to the chemistry of seawater, which dissolves shells and coral and creates a cascade effect that could disrupt entire marine ecosystems.

Satellite animation of ocean salinity made using one of the same satellites used to create the new estimates of ocean acidification. Credit: ESA

A recent study estimated $1 trillion annually in losses caused by ocean acidification by 2100, if left unmitigated. Some research has looked at “designer” corals and other creatures that could survive more acidic seas but more work needs to be done to figure out just what will thrive (or at least survive) the changing acidity.

The new monitoring techniques can help monitor hot spots such as the Bay of Bengal, the Arctic Ocean and the Caribbean, three places where ocean acidification could have major economic impacts but where little research has been done.

New monitoring efforts may come in particularly useful in the coming months, when the National Oceanic and Atmospheric Administration says there is a risk of major coral bleaching in the tropical Pacific and Indian Oceans through May, an event that may rival severe bleaching that occurred in 1998 and 2010. Some island nations in the tropical Pacific including Kiribati, Nauru and the Solomon Islands are already seeing ocean conditions that can cause bleaching.

The main culprit is ocean heat, which has been at record levels, but acidity adds to the stress on coral and makes it more susceptible to bleaching.

Satellites are not the only new tools to measure acidification’s impact. Other recent research has also suggested that listening to reefs could be a helpful, cost-effective way to monitor their health. Still others have explored other ocean metrics, such as the concentration of shell-building minerals, as a more accurate way to keep tabs on acidification’s impacts at a local level.

In the end, the choice to use ground observations or satellites isn’t an either/or decision.

“It is now time to evaluate how to make the most of satellite and in situ data to help us understand ocean acidification, and to establish where remotely sensed data can make the best contribution,” Peter Land, lead author of the new study and researcher at Plymouth Marine Laboratory, said in a press release accompanying the new study.

You May Also Like:
Whiteout? Map Shows Last Time All 50 States Had Snow
Climate Talks Draw Praise, Herald Hard Slog Ahead
Racking Up Climate Milestones One President at a Time
New Global Warming Goal Is Goal of Talks