The National Weather Service (NWS) is forecasting a widespread severe weather outbreak from the Great Lakes southeastward into the Mid-Atlantic states on Wednesday. The severe threat includes the potential for storms to form an organized line packing damaging winds, heavy rainfall and large hail. Specifically, NWS meteorologists are highlighting the threat for a derecho (pronounced de-Ray-cho) event, which is a widespread, long-lived swath of damaging winds associated with swift-moving thunderstorms.

According to the Storm Prediction Center in Norman, Okla., an event qualifies as a derecho if the wind damage extends more than 240 miles and includes wind gusts of at least 58 mph for most of its path. 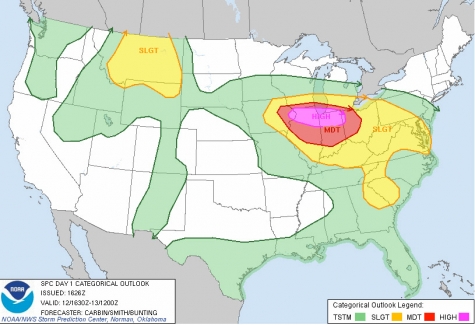 Major cities at risk include Chicago, Columbus, Detroit, Dayton, Indianapolis, Milwaukee, and Cleveland. The severe storms may spread southeastward out of the Midwest, and into the Mid-Atlantic Wednesday into Thursday. All told, nearly a dozen states and more than 50 million people are in areas considered to be under heightened risk. Severe thunderstorms are likely again Thursday in the Mid-Atlantic, from Richmond to New York City, as the storm system moves eastward, and there is a heightened risk of tornadoes in the Washington D.C. area on Thursday.

“It's a pretty high threat,” Bill Bunting, operations chief of the Storm Prediction Center, told the Associated Press. “We don't want to scare people, but we want them to be aware.”

In addition to the threat of widespread damaging winds, the storms also may cause flash flooding, since they will affect areas that have recently received above-average rainfall.

“These can be large systems, sometimes almost the size of a tropical cyclone,” said Ken Pryor, a research meteorologist at the Center for Satellite Applications Research at the National Oceanic and Atmospheric Administration in College Park, Md. Pryor said these events feature “widespread damaging winds that can rival that of a strong tropical storm or weak category 1 hurricane.” For example, a derecho that tracked from Iowa to Maryland and Virginia in July 2011, had winds of greater than 100 mph, Pryor said.

Derechos are relatively frequent events in the Midwest, where they occur about once a year, and in the Mid-Atlantic states, where they occur about once every five years, Pryor said. In June 2012, an unusually destructive derecho, touched off by a record warm and humid airmass, formed over eastern Iowa and traveled more than 700 miles in one night, knocking out power to more than 4 million customers from southern Indiana to Maryland. That storm system produced winds of greater than 90 mph and led to at least 24 deaths in seven states.

Pryor said meteorological data shows “very similar atmospheric forcing conditions” on Wednesday to those that existed before the June 2012 event, particularly from southern Illinois to the central Appalachians and the Carolinas.

Wednesday’s storms are likely to be set off by a jet stream disturbance riding along the outer fringes of a dome of high pressure anchored across the West and South Central states. At the surface lies a warm front that is draped across the Midwest, and a developing area of low pressure in the Missouri River Valley, which will act as a focusing mechanism for the storms.

The high pressure area is contributing to record heat from Nevada to Illinois. Denver, Colo., for example, had its earliest 100-degree day on record on Tuesday. This warm air is creating an unstable air mass that will allow thunderstorms to intensify as they propagate southeastward from Wisconsin, Iowa, and Illinois on Wednesday afternoon.