The desiccated soils and barren slopes of California have grabbed news headlines for months on end as the state is in its fourth year of a crippling drought that has forced unprecedented statewide water restrictions and billions of dollars in agricultural losses. 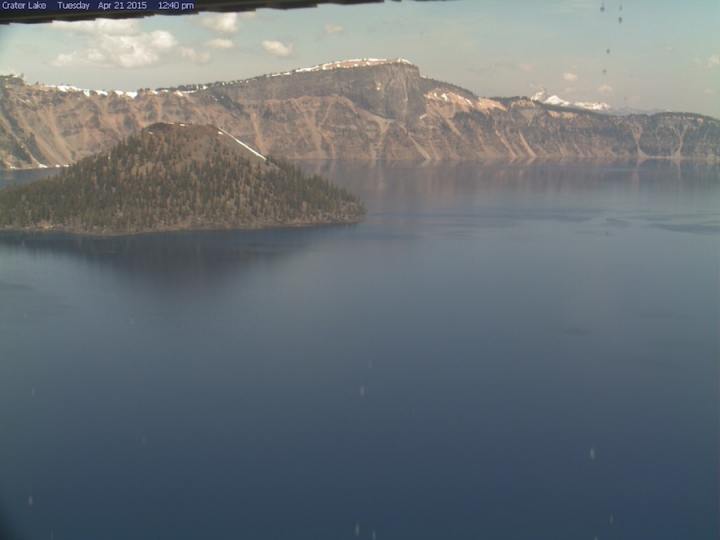 But while most eyes have been trained on the plight of the Golden State, its neighbors to the north are also facing a dearth of water, victims of some of the same atmospheric forces that have left California parched.

Oregon and Washington aren’t currently in the same dire straits as California, having at least received a fair bit of rain this winter, but the warm, snowless conditions could be a harbinger of the future in an overall warming world. Some experts and officials are hoping the region can learn from today’s situation to better prepare for an altered climate later in the century.

“We have an opportunity here to start thinking about our future,” Kathie Dello, deputy director of the Oregon Climate Service at Oregon State University, said.

The drought in California is one of both heat and dryness, as a persistent ridge of high pressure that parked itself over the western U.S. over the past two winters blocked much-needed storms and drove up temperatures to spring and summer levels.

Oregon and Washington, on the other hand, are stuck in a seemingly oxymoronic wet drought. The storms that were prevented from hitting California did provide rains to the Pacific Northwest, with winter precipitation in Oregon only about 30 percent below average, not even in the bottom 10 years historically, said Philip Mote, director of the Oregon Climate Service.

But the sky-high temperatures that marked the warmest winter on record for Washington and the second warmest for Oregon meant that much of the precipitation fell as rain, and not snow. Like California, parts of both these states depend on melting snowfall to fill their reservoirs, leaving them with potential shortages this year. Elevated temperatures also meant that what snow there was melted much earlier than normal.

Three-fourths of snow survey sites in Oregon had record-low snow measurements as of April 1, and fewer than half of them had any snow on the ground, according to a report by the Natural Resources Conservation Service. The snowpack across much of the Cascades Range in Washington was less than 25 percent, while the Olympic Mountains checked in at only 3 percent on April 1, an “unbelievably low”  amount, Karin Bumbaco, assistant state climatologist in Washington, said.

Those numbers, along with expectations that the drought conditions will persist if not intensify, have officials bracing for impacts this spring and summer.

“The two themes that keep coming up are summertime water supply and wildfires,” Dello said.

The water shortage concerns aren’t as widespread as in California because the western parts of Oregon and Washington tend to depend solely on rain, and so their supplies are fairly healthy. But in eastern areas that do depend on the snowpack to keep reservoirs topped up, residents and officials “are really concerned about what’s going to happen,” Dello said. 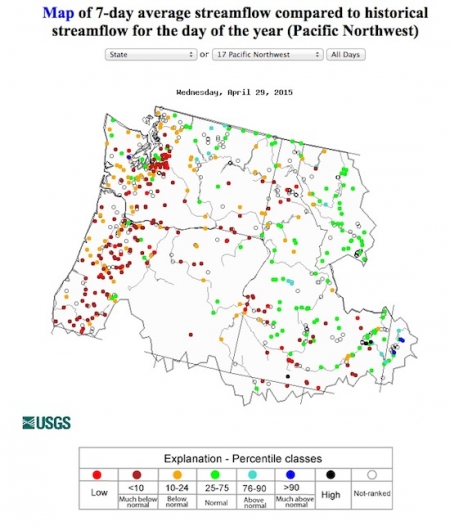 In eastern Oregon, there is concern that a lack of water to irrigate pastures for cattle grazing could further drive up the price of beef, and many farmers are already planning to let fields lie fallow, The Oregonian reported. In Washington, junior water users will get only 60 percent of their water allocations, Bumbaco said. The numbers could be worse, she added, but reservoir managers stored more rain than they typically would, anticipating the poor snow runoff.

The poor spring and summer runoff could also impact local wildlife. The Department of Fish and Wildlife is concerned about the ability of fish, like salmon, to be able to make it down streams to the ocean and is requesting money from the state to truck them to the sea, Bumbaco said.

Come June and July, the National Interagency Fire Center expects “increasing to above normal” potential for wildfires in a broad swath of the drought-stricken West, including all of Oregon and most of Washington, which could put homes, businesses and ecosystems at risk.

While the scarcity of snow poses immediate challenges for Pacific Northwest communities, it also presents an opportunity to better prepare the region for a warmer world.

The Pacific Northwest has already warmed by 1.3°F since 1895, and is expected to have warmed by 3° to 10°F by the end of the century (compared to the 1970-1999 average), according to the National Climate Assessment. And while heavy downpours there are expected to rise because of the greater water-holding capacity of the warmer atmosphere, less of that precipitation will fall as snow at all but the highest elevations. The warmer temperatures also mean a likely earlier spring snowmelt, changing the equations for calculating water supplies during the dry season.

Given those expectations, this winter stands as an example of what the average winter in Oregon or Washington could be like by the end of the century. 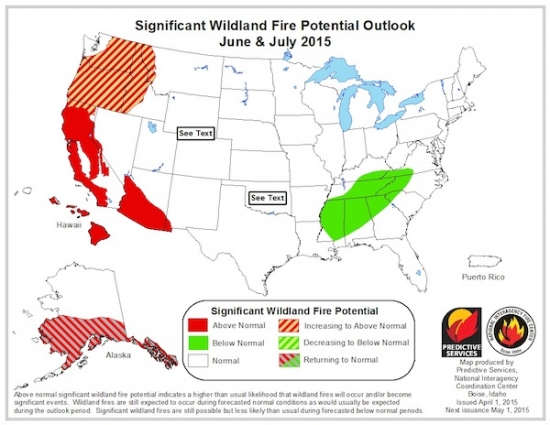 The National Interagency Fire Center's outlook for wildfire conditions across the country during June and July 2015. Conditions from California through Washington are elevated during that time period due to the drought in the region.
Click image to enlarge. Credit: NIFC

“There’s been a lot of talk about that in the community,” Bumbaco said. “I don’t’ want to say to anyone that this is climate change right now,” she cautioned, but said that it’s a fair statement that it could be a glimpse of the future.

Just as the drought is forcing some hard reckoning in California in terms of thinking about how water is stored, transported and used — including for watering lush suburban lawns and water-thirsty crops in an arid landscape — it could spur changes to be made in the Pacific Northwest.

Previous droughts contributed to changes in Seattle’s water system, as well as land-use rules that have contained urban development and prevented the kind of sprawl that has strained water resources in California, Dello said.

Exactly what form new changes might take is still very much up in the air, but officials have already floated ideas to increase water storage, use recycled water for activities like watering  lawns and flushing toilets, modernizing irrigation and encouraging efficient water fixtures in houses to reduce water use, and perhaps even making changes to the century-old system of parceling out water rights in the West.

“I don’t see that changing easily; it’s such an institution,” Dello said. But, she added, “people are certainly studying this.”

You May Also Like:
Looking for Global Warming? Check the Ocean
China Can Cut Cord on Coal (Mostly) by 2050
Major Changes Loom in Arctic as U.S. Leads Council
2015 Hottest Year to Date, Could Top 2014 Record