Last year was one of the globe’s 10 warmest years on record, with numerous milestones set that indicate that global warming is continuing, despite a plateau in the short-term trend in global average surface temperatures, according to a new climate report released on Tuesday. The report, which amounts to a 260-page checkup of the health of the climate system, details sweeping changes that took place last year in the Arctic, with records set for the lowest sea ice extent in the satellite era, lowest June snow cover in the Northern Hemisphere, warmest permafrost temperatures in northern Alaska, and most widespread melting of the Greenland ice sheet. 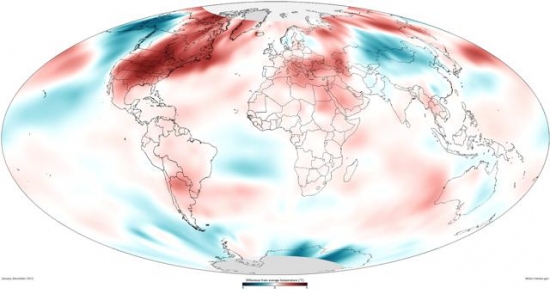 More than 97 percent of the vast Greenland ice sheet showed some form of melt during the summer of 2012, which was four times greater than the 1981-2010 average melt extent, the report said. Preliminary information shows that 2012 may be the 22nd straight year in which Arctic glaciers lost more ice than they gained, known as “negative glacier mass balance.”

Melting glaciers and warming oceans are causing sea level to increase, and global average sea level hit a record high in 2012 as well. According to Jessica Blunden of the National Oceanic and Atmospheric Administration (NOAA), ice melt has recently been contributing about twice as much to sea level rise as seawater expansion due to warming ocean temperatures.

The “State of the Climate” report, published in the Bulletin of the American Meteorological Society, was compiled by 384 scientists from 52 countries and underwent scientific peer review. This edition marks the 23rd straight year that scientists have issued a report.

“Many of the events that made 2012 such an interesting year are part of the long-term trends we see in a changing and varying climate — carbon levels are climbing, sea levels are rising, Arctic sea ice is melting, and our planet as a whole is becoming a warmer place,” said Kathryn Sullivan, the acting NOAA administrator, during a conference call with reporters.

Sullivan said the report provides evidence in support of the Obama administration’s efforts to mitigate and adapt to climate change. The White House has directed the Environmental Protection Agency to draw up regulations that would curb greenhouse gas emissions from existing and new coal-fired power plants, among other steps. 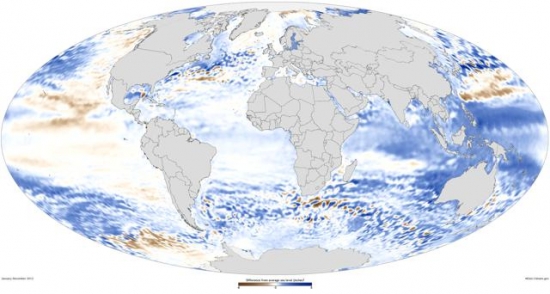 Sea level in 2012 compared to the 1993-2012 average based on AVISO satellite data.
Click image to enlarge. Credit: NOAA.

The report offers comprehensive evidence of how the climate system is changing, but does not draw conclusions about what is driving these changes. However, other studies have linked many trends, from the sharp decline in Arctic sea ice to global sea level rise, to manmade emissions of greenhouse gases from the burning of fossil fuels, such as coal and oil. The amount of carbon dioxide, which is the main long-term global warming pollutant, in the air hit record high levels in 2012, crossing the symbolic threshold of 400 parts per million at some Arctic observatories. Earlier in 2013, the 400 ppm mark was exceeded at other observatories, including Mauna Loa, Hawaii.

Tom Karl, who leads NOAA’s National Climatic Data Center in Asheville, N.C., said the climate indicators detailed in the study all show a coherent picture that is consistent with what would be expected in a warming world. He cited a cooling trend in the stratosphere, which was record cold during 2012, which is consistent with the effects of greenhouse gases on the earth’s atmosphere, since they warm lower layers of the atmosphere while helping to cool the upper layers.

While global average surface temperatures have not increased much during the past decade, Karl said natural variability in the climate system, such as a spate of La Niña events in the Pacific Ocean, have helped influence temperature trends on such short timescales. “When we look at the records, the prevalence of La Niñas since 2000 have contributed to colder ocean temperatures, and obviously that affects the atmosphere as well, and our global temperature numbers,” Karl said.

He said that during the decade ending in 2012, global temperatures decreased slightly, after warming during the previous decade. “There is considerable variability” in decadal trends, Karl said, cautioning against reading too much into them. The longer-term trends over 30 to 50 years all show a significant increase in global average surface temperatures, he said. 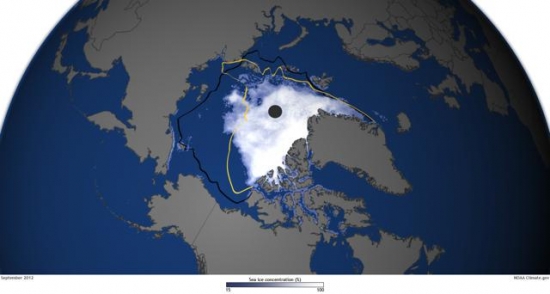 Map shows the sea ice extent on September 16, 2012, along with the extent of the previous record low (yellow line) and the mid-September median extent (black line).
Click image to enlarge. Credit: NOAA.

Even with the temporary slowdown in temperature trends, the report details an environment that is clearly undergoing rapid changes. No one seems to have told other elements of the climate system that surface temperatures have not risen much in recent years, largely because the Earth is still taking in much more heat from the sun than it is letting out, and high average temperatures are having many cascading effects.

“It’s really important to take a look at the broad spectrum of measurements that we have available,” Karl said. “You don’t see records every year but you do see a consistent picture . . . one of a generally warmer world,” Karl said.

For example, in recent years, ocean heat content has significantly increased, especially in the deep ocean, below 2,300 feet. Meanwhile, in the Arctic the past six years have seen the lowest sea ice extents on record, with 2012 dropping to 18 percent below the previous record low level, which occurred in 2007.

Jackie Richter-Menge, a research civil engineer at the Army Corps of Engineers’ Cold Regions Research and Engineering Laboratory in New Hampshire, said the Arctic has been warming twice as fast as the rest of the globe, on average. “Overall, we see the Arctic continues to be a region where we have some of the most compelling evidence” of warming temperatures, she said.

Richter-Menge said changes are cascading throughout the Arctic system, with less sea ice leading to higher Arctic Ocean sea surface temperatures, which in turn has helped the Arctic become greener, with more productive vegetation in the far north.

In contrast, in Antarctica, sea ice extent reached a record high in September of 2012. Studies have shown that this trend is actually consistent with the impacts from global warming, along with the influence of the thinning of the ozone layer, which has altered upper atmospheric air circulation.