Jersey Retreating From Rivers, But Not Coast, After Sandy

Jim Hutchison stepped down his front stairs into a tempestuous night to toss chicken bones in the trash when he noticed floodwaters starting to course past his blacked-out house in South River, N.J. After stepping back inside, he was quickly followed by Hurricane Sandy’s storm surge, which was being funneled down a nearby river. The floodwaters continued to rise, brimming with oil, brine and sewage, destroying furniture and electronics. Within an hour, Hutchison and his wife were rescued from chest-deep waters in their own home by an emergency worker who pulled a jet ski to their front door.

Two years after Sandy, the Hutchisons have been rescued again. Their finances were bailed out by federal taxpayers under an urban retreat program called Blue Acres. The $300 million property buyout is aiding some inland Garden State neighborhoods affected by Sandy. But the benefits that it promised for coastal regions are not coming to fruition. 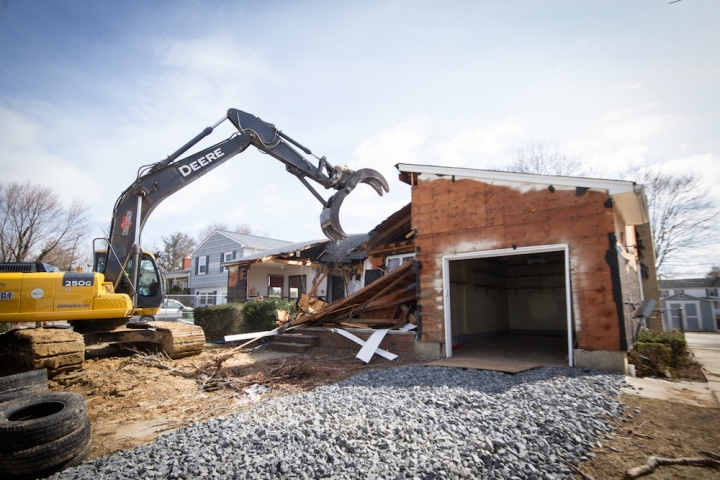 This house in Sayreville was purchased under Blue Acres and demolished.
Credit: Rosanna Arias/FEMA

The state government bought the Hutchisons’ trashed house in February using an appraisal that turned a blind eye to the property damage, and to the federal flood insurance rate hikes, that Sandy’s storm surge left behind. “It was pretty much a godsend,” he said.

New Jersey has so far bought dozens of Sandy-affected houses in Hutchison’s borough alone. The Blue Acres program aims to buy and raze 1,300 properties, replacing pockets of suburbia with open public spaces in some of the state’s most flood-vulnerable regions. Analysis of state data shows that, as of last week, 202 properties had been purchased at a total cost of $42 million. And officials said they were in negotiations with hundreds more homeowners. Nearly half of the houses bought so far have already been torn down.

Locations of houses purchased until end of October under Blue Acres

As shown in the map above, which was produced by Climate Central staff using the state’s data, none of the $300 million set aside for the program is being used to retreat from vulnerable coastal or barrier island areas. Instead, the funds are being poured into a ribbon of properties that stretches from Woodbridge Township south to East Brunswick Township. The closest properties to the seashore purchased so far have been in the borough of Sayreville, some 3 miles inland from Raritan Bay.

Those riverine communities were hit hard by Sandy’s watery wrath. But so, too, were the state’s shoreline areas, which were hit hardest by a combination of monster waves, superstorm-sized winds and flooding. Vast swaths of coastal cities were torn from their foundations and lost power supplies. Entire towns were essentially rebuilt. Some shoreline neighborhoods still remain pockmarked by vacant homes left in the storm’s wake, and likely will for years to come.

But there is no indication that the state government will buy them and convert the land upon which they were built (some would say recklessly) into open space.

“The whole [Blue Acres] concept is a good thing, because the best way to protect people is to move them out of harm’s way,” said Jeff Tittel, the director of the Sierra Club’s New Jersey chapter, which has advocated for such programs, and which helped the state plan and execute similar programs in floodplains prior to Hurricane Sandy. He said converting flood-prone homes protects other neighborhoods from flooding because the empty space that’s left behind absorbs and holds floodwaters. “We just would like to see it expanded, and to be much more comprehensive along the coast.”

State officials say anybody is welcome to apply for the Blue Acres program, which uses funding from Federal Emergency Management Agency and the U.S. Department of Housing and Urban Development to purchase properties at risk of flooding at their pre-Sandy valuations. A map produced earlier this year by NJ Spotlight clearly shows that coastal residents are applying for the program, sometimes in large numbers. But those applications are not being accepted. And because so much flood insurance is subsidized under the National Flood Insurance Program, despite post-Sandy attempts at reform, the financial risks associated with rebuilding wrecked coastal homes weigh heavily on taxpayers.

The first problem, officials say, is that too many coastal residents want to cling to their properties, despite the risks that storms like Sandy bare, and that the buyout program is only effective if groups of neighbors are all willing to sell. “The governor made it clear from the start that we were looking for clusters of homes,” said Larry Ragonese, a spokesman for New Jersey’s environmental protection department, which is running Blue Acres. “There has been no town that had clusters of homes that’s been presented to us that we’ve not considered.”

The other issue is that coastal properties are much more expensive than houses in tidal areas. That reduces the amount of urban acreage that could be converted to parkland using, say, a couple million dollars, which has been sufficient to buy an average of nearly 10 inland houses. “The bang for the buck was not there,” Rogenese said.

The bucks that are being drained by the program aren’t just of the federal variety. Removing properties from a municipality means removing some of the local government’s property tax base, which means it can be difficult to secure support for Blue Acres from some local lawmakers.

The decision by 50 South River homeowners to sell their houses through Blue Acres so far is expected to reduce South River’s revenue by $42,000 a year, said Hutchison, who serves as an elected member of council. An additional 20 to 30 homes might yet be sold, which would exacerbate that hit. “That tax loss could increase by another $25,000 to $50,000 annually,” Hutchison said.

Despite its heavy costs, experts told Climate Central that Blue Acres is helping to reduce costly flooding risks in a state where floods prompt the federal government to declare a disaster nearly every year. The program is an extension of more modest efforts that date back to the 1990s, when voters approved bond sales to finance buyouts of properties that flooded repeatedly.

“Blue Acres is critical to the state of New Jersey,” said John Miller, a water resources engineer who chairs the New Jersey Association for Floodplain Engineers’ legislative committee. “The biggest ingredient in this problem that we have is building in high-risk areas. New Jersey has a lot of density, and we have a lot of structures and infrastructure in repetitive flooding areas. We certainly think Blue Acres should be used statewide.”

For now, at least, that spending is doing nothing to alleviate the hazards posed by dangerous development along New Jersey’s storm-buffeted coastline and islands. Those hazards are being addressed through berm rebuilding and beach replenishment. Homeowners are being offered rebuilding assistance, although some of that assistance is taking a painfully long time to arrive.

Retreating from the rising sea, which is a strategy that climate adaptation experts recommend in the wake of coastal disasters, is so far proving to be a more formidable endeavor in New Jersey than retreating from its most waterlogged ‘burbs.