ROCKAWAY PENINSULA, N.Y. — Beachgoers in this New York City oasis can now flip-flop along a fully rebuilt boardwalk, one that reflects a coastal reimagination underway along the Mid-Atlantic and that heralds the staggering costs ahead of adapting to a changing climate.

Rockaway Beach, where a holiday getaway at the southern edge of Queens long ago transformed into a dense neighborhood, had its wooden boardwalk shredded by Hurricane Sandy. The homes behind it were crushed by a storm surge and inundated with floodwaters. Eight died here. 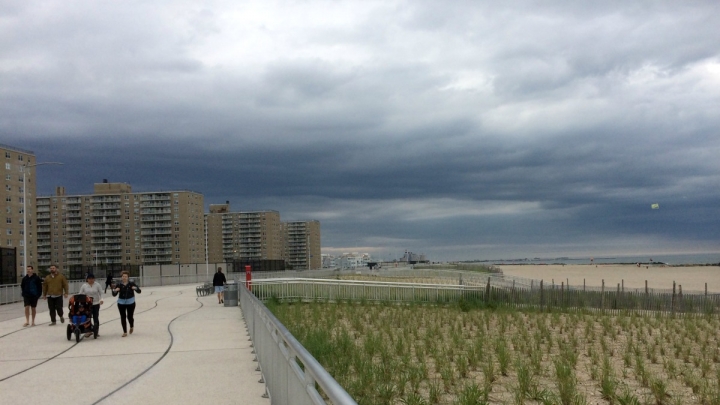 Nearly five years later, the wooden walkway has been replaced by more than five miles of sand-toned concrete atop 50 million pounds of sandbags and a retaining wall that holds in place new sand dunes. It is meant to help protect residents and residences from storm surges.

The boardwalk and dunes were built at a cost of $70 million a mile, with the final segment of beachfront walkway put in place last month.

“When Hurricane Sandy came, it lifted the whole boardwalk,” said Kylie Murphy, the city parks department’s project manager. “In some areas the whole thing was just demolished; it was gone. So we were really starting from scratch.”

The replacement of a venerable wooden walkway with a lattice of rigid and sandy flood protection structures is emblematic of how planners are rethinking coastal infrastructure in a vulnerable region.

Seas along the New York coastline have risen by about a foot during the past century. Warming has melted ice and expanded ocean water, currents have shifted, and geological processes have caused land to sink. That extra sea level exacerbated Sandy’s heavy toll.

“The city and state were both working on climate change adaptation and resilience before the storm hit,” said Jessica Grannis, a climate adaptation expert at the Georgetown Climate Center. “That helped tee them up to do a better job in terms of rebuilding with resilience. They already had a lot of the plans on the books.” 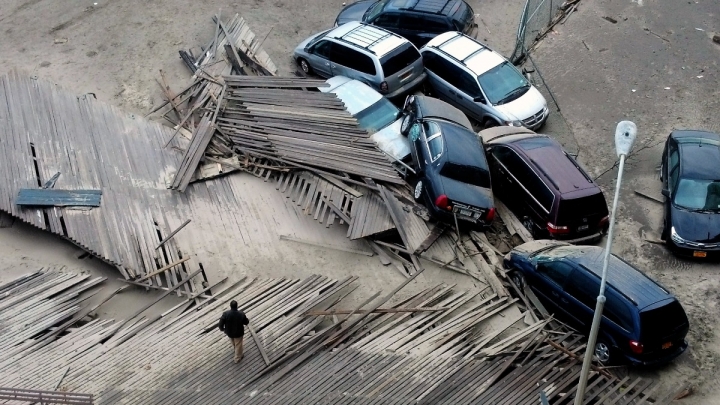 Subway lines and rail yards were rebuilt and fortified against flood risks after Sandy. Emergency shelters were built and volunteerism has been promoted. Building codes have been revised. Electrical equipment is being placed high in skyscrapers instead of at ground or basement level, where it risks being inundated.

“Both New York City and the state have really institutionalized resilience into city programs and policies,” Grannis said. “All of those things are examples that other cities can look to and replicate.”

The boardwalk cost $340 million, paid for by federal taxpayers using some of the $50 billion in Sandy relief funding authorized by Congress and signed by President Obama in 2013. The sand dunes in front of it cost more than $35 million to build, and they will need to be replenished after the next big storm or to counter erosion.

“The beach and the boardwalk is really our identity,” said Jonathan Gaska, manager of the local community board. He said it was hard to say goodbye to a wooden boardwalk but praised city officials for heeding requests for amenities like bike paths as well as coastal protections. “It’s a boardwalk, but it’s a more fortified boardwalk that gives an extra measure of security.”

The Rockaway Peninsula is a 10-mile strip of land an hour’s drive or subway ride from Wall Street. It is less than half a mile wide in many places. While new sand dunes will protect neighborhoods against storm surges that strike directly from the ocean, little has been done to protect neighborhoods near bays on the peninsula and elsewhere from flooding.

The Army Corps of Engineers has been investigating options for protecting bay areas here from floods, including barriers that could be raised when storm surges churn toward shorelines. Storms and floods pose constant risks along the Mid-Atlantic, and complacency among some New Yorkers melted away after Hurricane Irene in 2011 and Sandy in 2012.

“There seems to be a window of opportunity after a storm in the way that people think,” said Daniel Falt, an Army Corps of Engineers project manager who oversaw sand dune construction. “Sandy was a big event, but it’s not a unique event in the area.”

Cashing in on opportunities to rebuild more resiliently can be time consuming and expensive. While New York City may be leading the way in adapting to rising seas and flood risks, as part of a broader $20 billion climate resiliency plan launched after Sandy, it’s doing so with resources that are unthinkable in most places.

“The boardwalk shows we can both adapt and still have many of the benefits of what was there before,” said Robert Freudenberg, vice president of energy and environmental programs at the Regional Plan Association, a think tank based in New York City. “As a cautionary tale, it shows us that adaptation takes time.”

With sea level rise accelerating, pushing floodwaters into coastal cities from Miami to Boston and west to Hawaii, Freudenberg said “adaptation should be a part of every infrastructure project that we do right now” — but funding poses profound challenges.

Freudenberg’s group is researching financial options, which it plans to outline in a fall report, such as creating adaption funds topped with surcharges on insurance premiums.

“We have 3,700 miles of coastline in this region that need to be adapted,” Freudenberg said. “This is going to be the investment of a generation, and right now there’s no budget for it.”

You May Also Like:
Trump’s Base the Big Winner from Paris Withdrawal
The Larsen C Iceberg Is on the Brink of Breaking Off
Bipartisan Bill Introduced to Fix Neighborhood Floods