Fall and winter have conspired to create conditions that could lead to a potentially explosive summer as New Mexico fire managers face a “grim and potentially extreme situation” for the coming wildfire season.

That bleak assessment from the National Weather Service (NWS) comes less than 3 years since New Mexico endured a gruesome wildfire season. During the 2011 season, nearly 1.3 million acres were burned, or roughly an area the size of Delaware. It was the most acreage burned in state history. 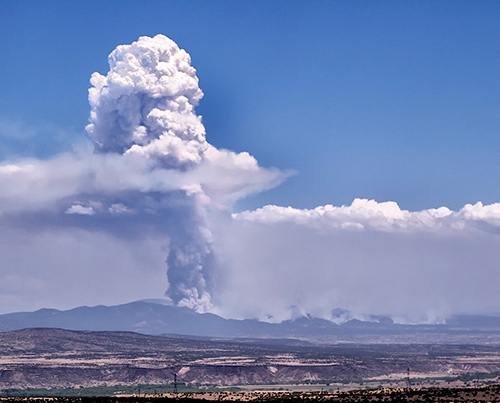 A smoke plume rises from the Las Conchas Fire in 2011. The fire burned 156,000 acres during what was New Mexico's most extensive wildfire season.
Credit: Wikimedia Commons

This year, similar conditions are developing for a wildfire season that usually starts in April and runs through early fall. A wet late summer and fall helped grasses, weeds, and shrubby vegetation grow and blanket the landscape. But an extremely dry winter has left them blowing in the wind as snowfall has been abysmal.

January was the driest on record with only 0.03 inches of precipitation falling across the state. Severe or extreme drought conditions now cover more than 64 percent of New Mexico with the most severe drought in the northeast. The lack of snowpack in the mountains have left trees dying or drying out. The only piece of good news is that soil moisture stands slightly above levels observed in the previous three winters at this time. Those levels are likely to tumble without any new snow, though.

In addition, seasonal forecasts aren’t offering much hope. The NWS in Albuquerque warned that, “without significant spring moisture, or timely late spring-early summer wetting events, the 2014 New Mexico fire season has the potential to be extremely destructive.”

A 2012 Climate Central report found that years with lower spring snowpack tend to be the years when more large fires are sparked. That same analysis also found that the number of large fires have increased in all 11 Western states since 1970, including a doubling in New Mexico through 2011. At the same time, the burn season across the West has also increased by 75 days over that period.

Heat and drought can help fuel fires and New Mexico has dealt with an uptick in both in the past 40 years. The state is warming faster than the global average, and is the 6th fastest warming state in the U.S. New Mexico also sits in the heart of the Southwest, a region that has been in a “megadrought” for the past 13 years and shows little signs of abating. Studies show that climate change will only make these issues worse.

These changes and dire future projections are why President Obama announced a plan to restructure how the federal government funds fighting wildfires earlier this week. The restructuring would allow federal agencies responding to wildfires to draw on a fund similar to how other agencies receive funding for other natural disasters like hurricanes, earthquakes, tornadoes and floods. That would take some of the stress off of yearly agency budgets, which have seen an increasing percentage devoted to fighting wildfire costs.