LONDON - Solar power’s greatest drawback has always been that it is intermittent and, even in the sunniest climes, peak electricity demand is frequently in the evening when the Sun is going down. 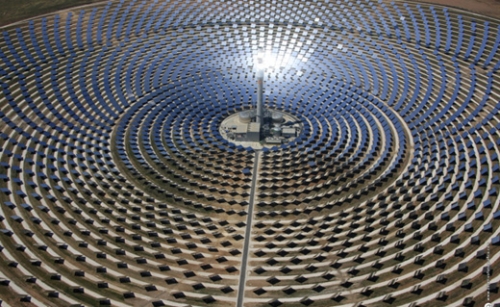 The Gemasolar plant, built by Torresol Energy, can store enough heat to operate for 18 hours at full capacity without any additional power from the Sun. For many months of the year it can run for 24 hours a day.
Credit: Torresol Energy

The engineering challenge has been to design a system in which enough of the Sun’s heat can be stored to produce full power continuously even on cloudy days – and better still, all night.

Many different designs have been tried, but finally a commercial plant in Spain seems to have cracked the problem, and as a result has won an award from a panel of independent judges.

The Gemasolar plant near the Spanish city of Seville, built by Torresol Energy, can store enough heat to operate for 18 hours at full capacity without any additional power from the Sun. For many months of the year it can run for 24 hours a day.

The plant is small by power station standards, producing 20 megawatts of electricity – enough for 25,000 homes, reducing carbon dioxide emissions by 30,000 tonnes a year.

It has 2,650 mirrors, known as heliostats, which cover an area of 457 acres (185 hectares). These train the Sun’s rays onto a central tower, where they heat molten salt to more than double the boiling point of water. More heat is produced than is needed for maximum power, so the surplus is stored in molten salt tanks until it can be used during cloudy periods or at night.

The award comes from DESERTEC, an organization dedicated to providing energy from arid regions, which had shortlisted four power plants, all able to store power from the Sun and produce electricity at night. It described the Gemasolar plant as “a pioneer for future power stations.”

The plant has been working for three years, showing that the technology works effectively summer and winter. The company and DESERTEC both believe that it, or a series of similar plants, can be scaled up to provide much larger populations with renewable energy.

There are now 105 similar installations – known as concentrated solar power plants – across the world. One has been operating for 30 years in California, and a large number of newer ones have been built in desert areas of the western United States. Spain is a world leader in the technology, and a number of Middle Eastern desert states have built plants of different designs with molten salt storage capacity. Gemasolar is described as the most successful design so far. 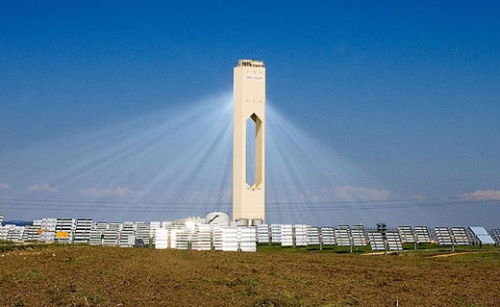 Gemasolar and DESERTEC both believe that a series of similar plants can be scaled up to provide much larger populations with renewable energy.
Credit: DESERTEC Foundation via Climate News Network

The eventual aim of concentrated solar power companies is to build large plants in the deserts of the world and transfer the electricity by super-conducting cables to large centers of population hundreds of miles away.

The most obvious application is from the Sahara desert across the Mediterranean to Europe. Germany is particularly interested in the potential from this source of large-scale clean power.

It is quite distinct from photovoltaic panels, which produce electricity directly from sunlight. Here the problem of intermittent power remains, particularly where the weather is very changeable, as in north-west Europe. Despite the difficulties, engineers are working on ways of balancing the output from various solar, wind and biogas plants to keep the grid evenly supplied.

The industry is growing at an enormous pace worldwide, because the cost of solar panels has fallen by half and now is far cheaper per watt than nuclear power; and in the U.S. it is only marginally more expensive than coal.

Those keen on preventing climate change reaching dangerous levels point out that a one-kilowatt solar system can each month eliminate the burning of approximately 170 pounds of coal, preventing the release of 300 pounds of CO2 into the atmosphere, and saving up to 105 gallons of water consumed in cooling towers.