Natural Gas Poised to Surpass Coal For Electricity in U.S.

This year is expected to be the first in U.S. history that more electricity will be generated from natural gas than coal, a new analysis has found, marking another milestone in the decline of America’s largest single source of greenhouse gas emissions. 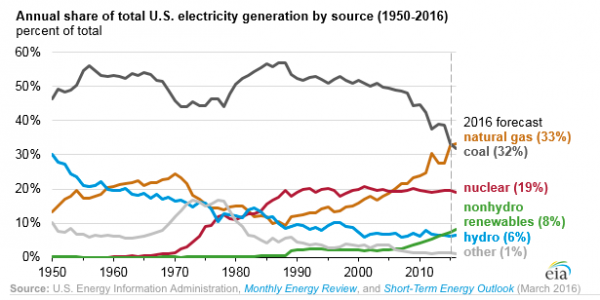 Natural gas overtook coal as the leading U.S. source of electricity — on a monthly basis — last April, but 2016 is likely to be the first full year in which it will have replaced coal as the chief source of electric power nationwide, according to the analysis published this week by the U.S. Department of Energy.

The plan, which has been temporarily blocked by the Supreme Court, aims to cut carbon emissions from coal-fired power plants 32 percent below 2005 levels by 2030.

Low natural gas prices have been driving utilities away from coal for most of the last decade as the nation’s shale gas and fracking boom flooded the market with gas. Prior to 2008, coal generated half the nation’s electricity. Today, it generates less than 30 percent.

Renewable energy sources are also playing a role in the transition away from coal. More new wind and solar plants are expected to become operational in 2016 than new natural gas plants, EIA data show. 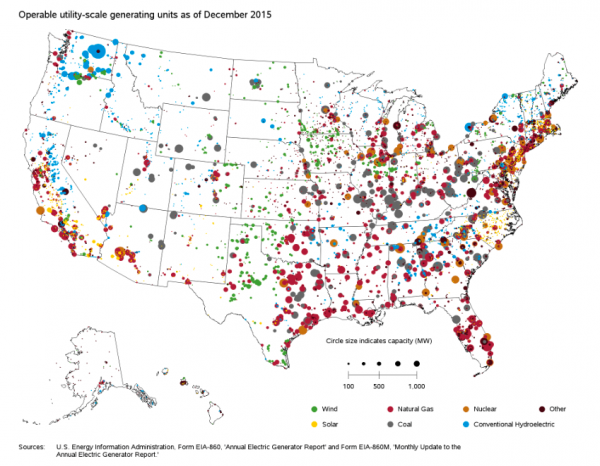 This map shows all the operating electric power plants in the U.S. and the types of fuel they use.
Click image to enlarge Credit: EIA

No new coal-fired power plants are expected to be built this year.

Hodge said the annual trend away from coal power generation is unlikely to reverse anytime soon even if natural gas prices rise again.

“Prices of gas have been low for so long, and there’s these environmental regulations on top of that, that are making the industry think whether they want to keep these coal plants around,” he said.

Many utilities are quickly making the transition away from coal in favor of natural gas to meet environmental regulations, Quin Shea, vice president of the utility trade group Edison Electric Institute said in a statement.

“Our industry is making significant investments to transition the generation fleet and is taking meaningful actions to reduce greenhouse gas emissions,” Shea said.

You May Also Like:
Climate Matters: Spring Coming Earlier Across U.S.
Another Month, Another Troubling Arctic Sea Ice Record
February, Winter Were Record Warm For Planet
What To Know About February’s Satellite Temp Record