Natural Gas Emissions to Surpass Those of Coal in 2016

The U.S. is expected to reach a major carbon emissions milestone this year: For the first time, carbon dioxide emissions from burning natural gas in the U.S. are set to surpass those from burning coal — the globe’s chief climate polluter.

Emissions from burning natural gas are expected to be 10 percent greater than those from coal in 2016, as electric companies rely more on power plants that run on natural gas than those that run on coal, according to U.S. Department of Energy data. 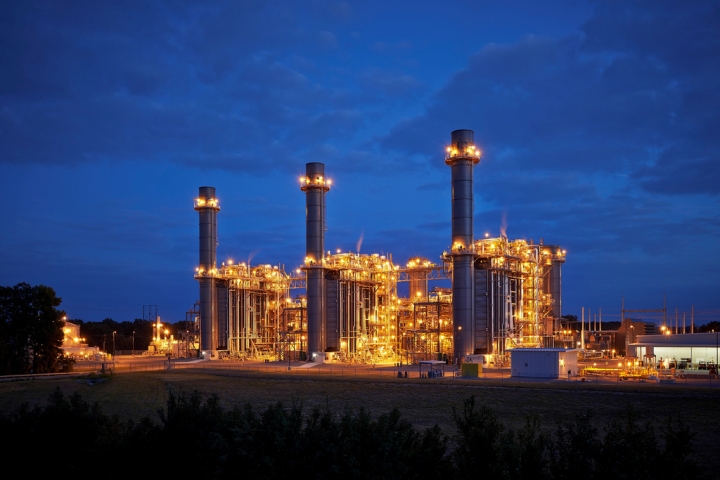 The milestone comes as an ample supply of low-cost natural gas encourages electric power companies to use more gas than coal. That trend is leading to to a continued decline in coal production.

U.S. climate policies, such as the Obama administration’s Clean Power Plan, are also encouraging utilities to shift away from coal as a way to cut greenhouse gas emissions. Countries that signed the Paris Climate Agreement are trying to limit emissions to prevent global warming from exceeding 2°C (3.6°F) above pre-industrial levels.

Natural gas emits about half as much climate change-driving carbon dioxide as coal. Perry Lindstrom, a greenhouse gas emissions analyst at the U.S. Energy Information Administration, said the rise of natural gas is reducing the carbon intensity — the amount of carbon dioxide emitted per unit of energy — of the energy Americans consume every day. 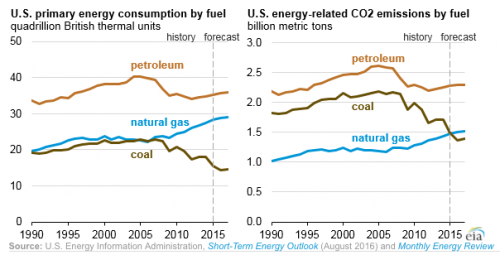 These graphs show overall U.S. energy consumption and carbon dioixde emissions by fuel through 2015 and projections for 2016.
Credit: EIA

“You get more energy per metric ton of CO2 emitted from natural gas than from coal,” Lindstrom said.

There is a downside to the emissions milestone, however. Though natural gas burns cleaner than coal, producing natural gas and piping it to power plants leaks methane into the atmosphere.

Methane is a greenhouse gas more than 35 times as potent as carbon dioxide in driving climate change over the span of a century, and global atmospheric concentrations of it have been increasing steadily since 2007. That increase has been tied partly to U.S. natural gas production.