Multnomah County Trees Are Doing Much More Than We Think 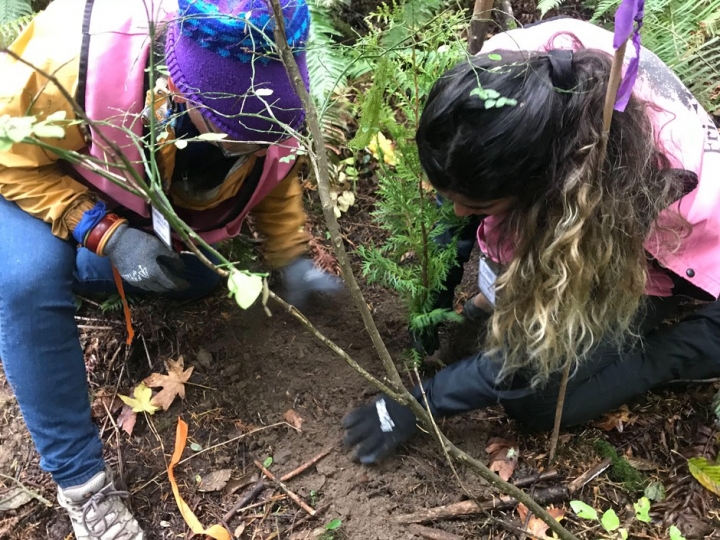 Shelly Bedell isn’t afraid to get down and dirty. On a recent October Saturday, she dug into the soil the same way a dog digs a hole to bury its favorite bone. Then Bedell started what she calls “tickling and teasing” the roots of a young tree, so it would be ready to be planted in its forever home.

“You sweep those roots so they’re going down, and it can be pretty sloppy,” she explained to a new volunteer. “Yeah … tuck this baby to bed.”

Bedell has been volunteering with Friends of Trees since the mid-1990s. It’s a nonprofit organization that plants trees where they are needed the most in the Portland area and beyond. On this day, she was teaching new crew leaders how to properly plant trees and the importance of doing it as a community.

“There’s a physical good, an ecological good and a climate good, but there’s also really a soulful, a soulful goodness that happens,” Bedell said.

For Bedell and many others, trees and the act of planting them are all about a general ecological soulful goodness. They’re aesthetically pleasing. They absorb carbon that would otherwise contribute to climate change. They clean our air and water and provide shade on those really hot days.

That’s not all. Portland’s trees are also playing an underappreciated role every time it rains: They’re helping us prevent major flooding and avoid erosion; they are literally holding Multnomah County together.

Listen to "Multnomah County Trees Are Doing Much More Than We Think" on Spreaker.

“They are these fantastic marvels of engineering that an engineer cannot build,” Portland Bureau of Environmental Services Jennifer Karps said. “They’re these systems that work collectively as a forest to help to manage rain, basically.”

In Multnomah County, where the region receives about 42 inches of annual rainfall, the benefits of planting trees are paying off. Data suggests tree canopies are preventing millions of gallons of rainfall from flooding the neighborhoods.

Extreme rainfall events are expected to keep occurring more often and lasting longer in the future as fossil fuel burning causes the climate to continue to warm. Trees in urban spaces are dampening some of these negative effects.

Runoff is rainwater that is bound to wash over impervious surfaces like streets and sidewalks or areas with no vegetation that can’t intercept or prevent water from going to our stormwater drains.

Trees intercept the rainfall that would otherwise reach the ground in a flash. In this way, trees act like fine filters. Many of the raindrops that are detained on leaves or branches eventually evaporate once rainfall halts.

As for rainwater that does reach the soil, tree roots absorb a lot of it and send it back to the canopy, where it gets transpired through leaf surfaces and is returned to the atmosphere. 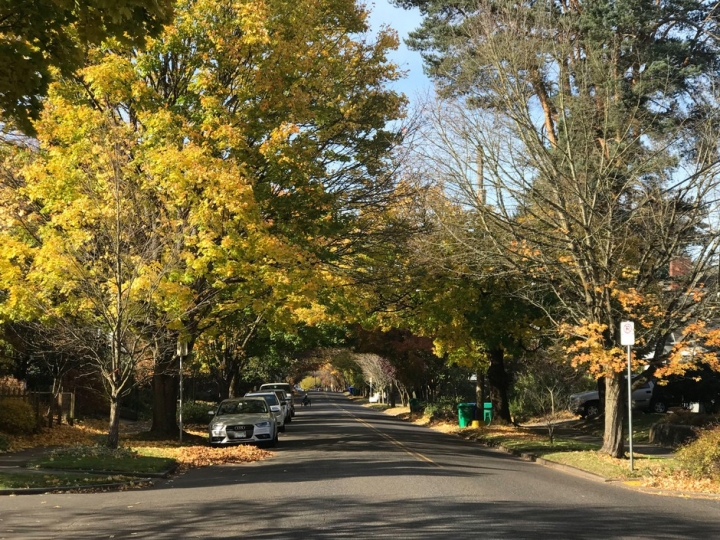 Forestry researchers say it’s hard to calculate how many gallons one mature tree can intercept, but according to i-Tree, an online tool developed by the U.S. Forest Service, tree canopies in Multnomah County avoid nearly 4 billion gallons of runoff. That’s enough to cover a little over 9,000 football fields 1 foot deep — water that would otherwise be flooding neighborhoods.

The Portland Environmental Services and Parks bureaus and local nonprofits often strategically plants trees for stormwater management benefits. So they think a lot about where to plant trees.

“Between the curb and sidewalk, that’s where the tree is going to provide the greatest stormwater management benefit,” Karps said. “We’re very careful about where we plant the tree with respect to all sorts of other things — intersections, stop signs, other trees, lines of sight.” 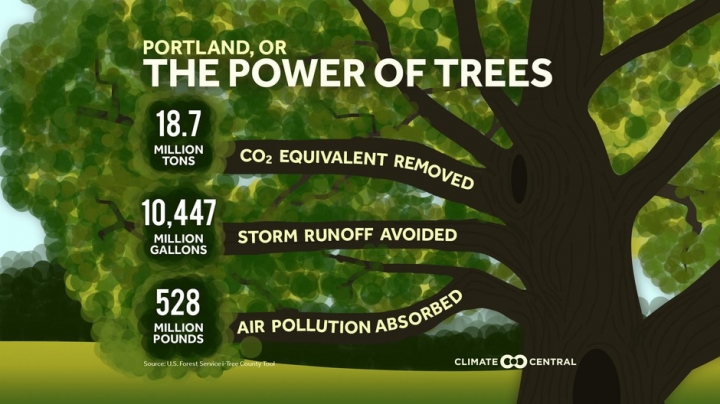 Since so many partnerships are involved in the process, it’s not a coincidence tree canopies are intercepting millions of gallons of rainwater annually.

“They are the smartest financial decision. To plant a tree that is going to work so hard to clean our water systems and to establish our soil and provide all of these community benefits, and it’s going to just continue to grow the benefit,” Friends of Trees’ Whitney Dorer said. “It’s the one thing that doesn’t depreciate in value. It actually appreciates.”

Trees aren’t a cost-free part of the city’s infrastructure. Maintaining stormwater drains and grates requires picking up leaves and that takes a lot of work and money. The Portland Bureau of Transportation spends nearly $7 million a year on street sweeping, including brush clearing and other vegetation-related sweeping and clearing. About $1 million of that goes toward Leaf Day, which uses specialized equipment to clean residential streets. 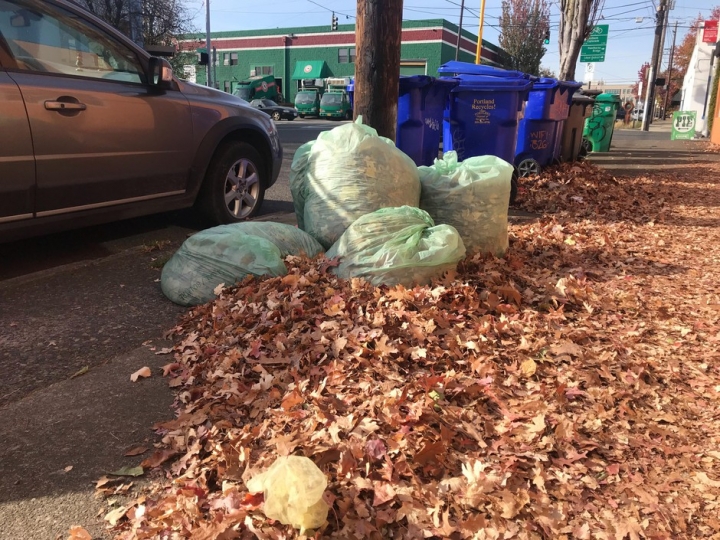 Bagged leaves and more fallen leaves waiting to be picked up on a Southeast Portland street. Monica Samayoa/OPB

From November to mid-December, the Bureau of Transportation has designated Leaf Days for districts with the highest concentration of mature trees all over Multnomah County. Those leaves are picked up and used to make compost.

It’s also important to note the importance of maintaining the longevity of mature trees.

“It’s true that large trees have a lot more leaf area and lets a lot more capacity to control runoff than smaller trees do. On the other hand, those mature trees will not last forever,” Berland said. “So maintaining our older trees, while also planning for the future by planting new trees, are both important activities.”

Berland says it takes more than a city full of trees to prevent stormwater runoff. Other green solutions like rain gardens and bioswales are important. And so is concrete-and-steel infrastructure, like stormwater grates, pipes and sump pumps.

“The more tools we deploy on the landscape, the better chance we have to avoid runoff,” Berland said. “So I think it makes sense to develop a portfolio of both gray and green infrastructure solutions.”

As the city of Portland and nonprofit organizations continue to work together to create more gray and green infrastructures to prevent stormwater runoff, it means more work for Friends of Trees.

Since the group was founded in 1989, Friends of Trees volunteers have planted over 800,000 trees, shrubs and native plants all over the Portland Metro area and beyond. And they aren’t done yet.

“Friends of Trees is not going anywhere, so we have reached our 30th birthday,”Dorer said. “And we are slowly making our way to a million trees.”