Much of the Middle East already swelters through what are some of the hottest summers on the planet, but, occasionally, a combination of sky-high temperatures and incredible humidity can take conditions to almost unreal levels.

In late July this year, for example, a major heat wave combined with astronomically high humidity to send the heat index in Bandar Mahshahr, Iran — near the northern coast of the Persian Gulf — to a mind-bending 163°F. 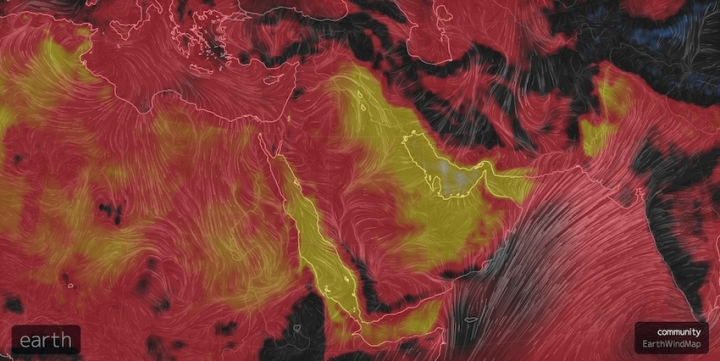 A snapshot of the conditions that affected the Persian Gulf region at 11 a.m. local time on July 31, 2015, when a heat wave sent the heat index soaring.
Click image to enlarge. Credit: earth.nullschool.net

Such intense levels of heat and humidity tax the abilities of even healthy human bodies to cope and can be deadly for the elderly and infirm, as other recent major heat waves, such as the ones that swept across Europe in 2003 or Russia in 2010, showed.

If the buildup of heat-trapping greenhouse gases in the Earth’s atmosphere continues unabated, these worst-of-the-worst heat waves look to become more common and reach new, unfathomable heights in the Persian Gulf area, a new study detailed in the journal Nature Climate Change finds.

The “business-as-usual scenario of greenhouse gas emissions may result in severe climate change impacts at regional and local scales” in the Middle East, study co-author Elfatih Eltahir, of MIT, said in an email.

Intense heat waves have some of the clearest ties to global warming, as the steady rise in the planet’s average temperature tilts the odds in favor of more and hotter extremes. Even now, scientists can say that the occurrence of certain heat waves has been made more likely by the temperature rise the Earth has experienced so far.

Heat waves in the Middle East tend to conjure images of arid desert landscapes baking in the relentless sun, bringing intense — but dry — heat. While this is true of interior areas, because of a confluence of geographic factors, cities near the coast can experience extreme heat and humidity that would make Florida summers seem downright balmy.

Summers in the Middle East typically feature widespread high pressure and subsiding air, which keeps skies clear and lets temperatures soar. Combined with that are the extremely warm waters of the Gulf (partly a factor of their relative shallowness) and high evaporation rates, which builds up humidity that can affect coastal areas when winds are blowing the right direction.

When humidity comes into play, it can block the body’s natural coping mechanism for heat: sweat. The combined temperature and moisture can be expressed by something called the wet-bulb temperature, effectively a measure of “mugginess.” If this reaches about 95°F, it can become difficult for the body to lose sweat through evaporation to cool itself.

Right now, in the present climate, the wet-bulb temperature rarely goes over about 88°F, though it can (and did during the 2015 heat wave) in the Gulf.

But the new study, which used high-resolution climate models that look specifically at the Gulf region, found that if greenhouse gas emissions continue on their current path, heat waves will be capable of exceeding the 95°F wet-bulb mark, and will do so several times in the last three decades of this century.

Some of the locations that will likely see such extremes include Bandar Mahshahr; Dhahran, Saudi Arabia; Doha, Qatar; and Dubai and Abu Dhabi, United Arab Emirates. Some of these regions have seen tremendous growth in recent decades, which means large populations could be at risk in the future. 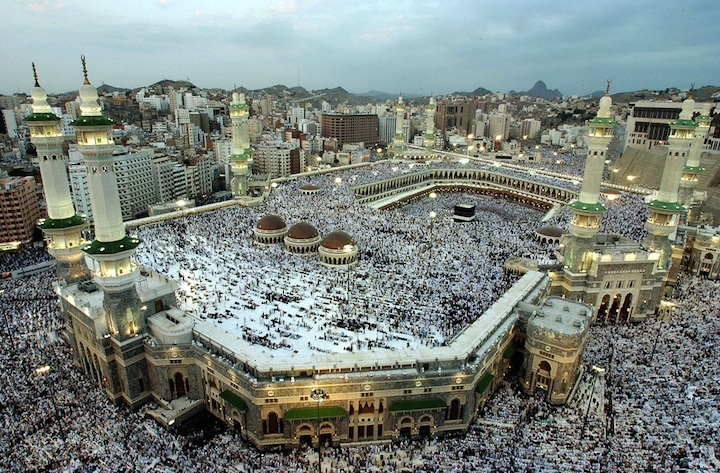 Pilgrims at sunset prayer before the beginning of the hajj in 2007.
Credit: flickr/menj

Areas off the Red Sea could see slightly lower, but still intense, heat wave conditions, as well. This includes Mecca, site of the annual hajj, the religious pilgrimage to be undertaken by all Muslims, which raises concerns for future pilgrims when the event falls in the summer months, the authors note.

“I was surprised to see how hot and humid these heat waves are already today, and how dangerous the conditions are likely to become within the course of this century,” Christoph Schär, an atmospheric scientist with ETH Zurich in Switzerland said in an email. Schär, who was not involved with the study, contributed a commentary piece on the research in the same journal.

Eltahir and his colleague Jeremy Pal of Loyola Marymount University in Los Angeles also looked at what would happen under a scenario where a middle-of-the-road approach to mitigation is taken, so emissions are mitigated but not under the most aggressive conditions. The story is appreciably different, keeping conditions under that 95°F mark, even by the end of the century.

But if mitigation actions don’t keep emissions growth on a much lower path, Eltahir and Pal described the future of the region like this: “A plausible analogy of future climate for many locations in Southwest Asia is the current climate of the desert of Northern Afar on the African side of the Red Sea, a region with no permanent human settlements owing to its extreme climate.”

You May Also Like:
Pulp Fiction, The Series
Why Today Is a Critical Moment for the Clean Power Plan
Pollution Could Buy An Extra Decade of Arctic Sea Ice
Study Targets Methane Leaks Between Underground Wells