Sea ice melting partly because of human-caused climate change could open previously inaccessible Arctic Ocean waters to expanded oil drilling, but the risks of drilling there will be extremely high.

As sea ice melts in the Arctic, the oil and gas industry has expressed new interest in drilling offshore and is expected to invest roughly $100 billion there by 2023, according to a new paper from the Woodrow Wilson Center, a Washington-based think tank. The paper highlights an agreement between ExxonMobil and Russian oil company Rosneft, which have planned to jointly explore for oil in the Kara Sea off the Arctic coast of Siberia. 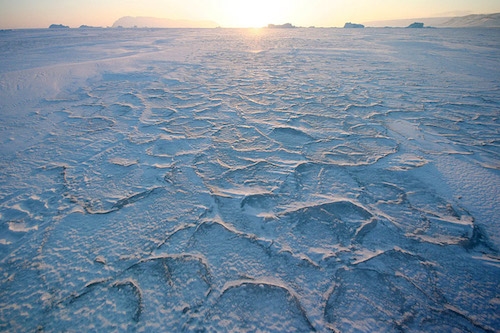 Arctic sea ice off the coast of Greenland.
Credit: NASA/NSIDC

The paper was discussed in a Wilson Center webcast — the day before oil giant Royal Dutch Shell announced that it would suspend its Alaska offshore operations for 2014 and possibly withdraw from the region entirely.

U.S. Geological Survey estimates show that the Arctic may harbor 1,670 trillion cubic feet of natural gas and 13 percent of the Earth’s undiscovered crude oil, which adds up to about 90 billion barrels, according to the paper. Drilling has occurred in the region since 1968, when ARCO and Standard Oil began drilling near Prudhoe Bay at the far northern edge of Alaska.

About 412 billion barrels of undiscovered crude are suspected to be eventually found in the Arctic, about 75 percent of which are in deep water off the coasts of Alaska, Canada, Russia and Greenland, all harboring up to 1 billion barrels of recoverable oil. But the paper says developing that crude oil is extremely hazardous because of strong ocean currents, severe storms and floating ice. Seismic oil exploration in those conditions is nearly impossible if the sea ice is too thick.

“Climate change has played an important role” in expanding access to that untapped store of oil and natural gas, according to the paper.

Melting sea ice opening more of Arctic waters for drilling doesn’t mean drilling for oil there is a risk-free enterprise. The costs of drilling in hazardous areas have increased since the BP Deepwater Horizon oil spill in the Gulf of Mexico, and only the best-funded international oil companies have the expertise and the resources to operate there, according to the paper.

Government regulators and environmentalists have been forceful with their concern about the hazards of drilling in the Arctic, saying that the costs of cleaning an oil spill in icy conditions and the effect on the Arctic ecosystem would be extreme. Energy companies fear that regulators in North America will place new restrictions on drilling in high-risk places, increasing the costs of operating there.

Since Deepwater Horizon, 10 oil companies paid more than $1 billion for the development of a marine containment system designed to stop well blowouts underwater. Add to that other well drilling safety costs and the pricetag of developing a single Arctic oil well reaching up to $900 million, and energy companies begin to question the viability of developing in the Arctic at all, the paper says.

“There’s only a handful of companies that have the capital to think about it,” said David Biette, director of the Wilson Center’s Canada Institute.

Shell, Chevron and Exxon are among the few companies that can operate in the Arctic, he said. 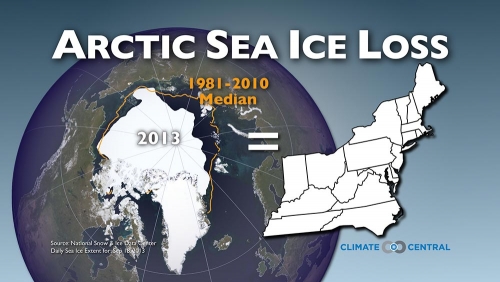 Arctic sea ice loss during the 2013 melt season was equivalent to losing the entire area of states from Tennessee to Maine.
Click image to enlarge. Credit: Climate Central.

But Shell, which has spent billions on buying leases in Alaska’s Chukchi and Beaufort seas, announced that the drilling program there has been suspended amid a legal battle with environmentalists over whether Shell’s leases were legally granted by the federal government.

“Right now, they don’t have the technology, the wherewithal and the capital to put into that,” Biette said. “It doesn’t make sense to do it now. They don’t want to have an accident. Shell sees the difficulties it went through the past couple years. With today’s technology and regulations, it’s not going through that.”

Though technology has allowed energy companies to avoid icebergs while drilling offshore in many places, climate change could also increase the number of icebergs around drilling platforms and increase the risk of operating there, he said.

Despite the risks, oil companies may still explore for oil in the Arctic as sea ice melts, though it could still take 20 years or more for them to develop the technology that will make it safe enough to drill in icy seas and bring the oil and gas to market, according to the paper.

University of California-San Diego international relations professor Mikkal Herberg said during the webcast that the ability for companies to drill there safely requires public confidence in the oil companies.

“The industry’s ability to manage problems is difficult enough in a relatively benign setting,” he said. “When you move into the Arctic, this is a place where to develop that oil and gas you really do need what people call ‘the social license’ ” — public comfort that drilling can happen without accidents.