March Snowstorms ‘Uncommon, But Not Rare’

The nor’easter taking shape off the East Coast on Tuesday makes it seem like winter will never end in the Mid-Atlantic and Northeast, where people have had quite enough of the white stuff, thank you. But March snows aren’t just a symptom of this year’s deep chill; snowstorms in March can and do happen, even if they don’t happen every year.

“They’re uncommon, but they’re not rare,” said Paul Kocin, a winter weather expert with the National Oceanic and Atmospheric Administration. 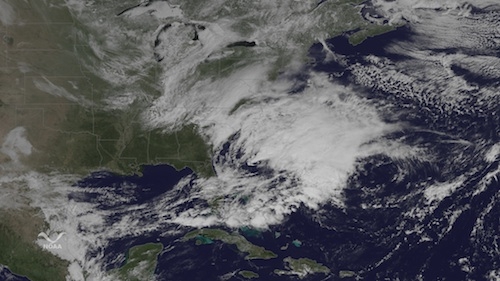 The GOES East satellite snapped this image of a developing nor'easter off the East Coast of the United States at 11:15 a.m. EDT on March 15, 2014.
Credit: NOAA

In fact, the Washington, D.C., area didn’t see it’s first significant snowfall last year until March, with 3.3 inches of snow falling at Dulles Airport on March 6 and another 3.2 inches falling on March 25 (though little fell in the city itself). Both events were record snowfalls for those dates, and that March was the snowiest since 1999, according National Weather Service records.

New York City and Boston are also no strangers to March snows, with both locations typically seeing at least a few inches during the month, according to historic NWS records. And these cities can even see the odd April or May snowstorm.

The late snows aren’t surprising given the chill that can linger in these areas well into March before spring — a time of turbulent and varying weather — has a chance to warm the ground and melt the snow and ice that winter left behind.

“Certainly the climate allows for snowstorms in the early spring in the Northeast and the Mid-Atlantic,” said Bob Henson of the University Corporation for Atmospheric Research.

That has definitely been the case this year, with an atmospheric pattern that since November has continually shunted cold Arctic air into the eastern United States with only brief interludes of warmer weather, Kocin told Climate Central.

Helping fuel the potential for this storm are the snow and ice still on the ground from previous snowfalls.

“You have a reservoir still of heavy snowpack across eastern Canada” and the Northeast, Henson said, which tends to create colder surface air, setting the potential stage for snow.

However, there are plenty of other variables in play to determining whether a late season nor’easter like this one will be another 1993 “Storm of the Century” or a miss for the region.

“All the other conditions have to come together,” Henson said.

The Superstorm of 1993, as it was also called, was one of the most intense mid-latitude cyclones ever recorded (they have a different energy source than tropical cyclones) and dumped snowfalls of 6 to 8 inches as far south as Alabama and Georgia. The storm, which moved northeastward across the eastern U.S. from March 12-14, shattered snowfall records in many locations, especially in the Southeast, and buried locations from western North Carolina up to Vermont in more than 20 inches of snow. 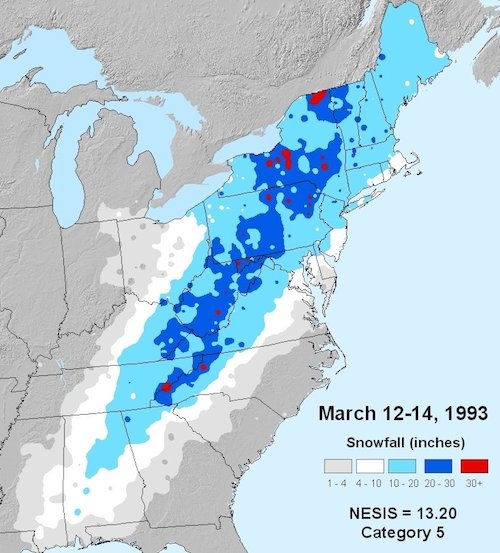 Snowfall totals from the 1993 “Storm of the Century,” which brought record snowfalls to many places in the Southeast and dumped considerable amounts of snow all along the East Coast.
Credit: NCDC

One key difference between this nor’easter and the 1993 storm is the location of the low pressure at the storm’s center. The 1993 storm tracked over land, while current forecasts have the current storm well off the coast, keeping snow totals lower than they would be if it hugged the coastline.

“The ingredients are there, they’re just not coming together,” Henson said.

Two exceptions may be the Canadian Maritime Provinces and Cape Cod. The storm looks to hit the Maritime Provinces close to head-on and parts of the region are under a blizzard warning and could see between 4 to 16 inches of snow, according to The Weather Network. The Cape Cod area looks to see the biggest impact in the U.S. and is currently under a blizzard watch, with the potential for 6 to 12 inches of snow.

Other areas, from Washington, D.C., where it is already snowing, up to Boston look to see from less than an inch to up to 3 inches from the storm, though how much a given area sees depends on the track the storm takes.

“We're on the edge of a developing powerful storm,” Gary Szatkowski, a meteorologist with the NWS office in Mount Holly, N.J., wrote on Twitter.

Another factor in determining how much snow sticks during a March storm is the amount of sunlight hitting the ground. The air temperature during a March snowstorm could be the same as that during a January storm, but the snow is more likely to accumulate in January because the sun is at a lower angle in the sky and the length of the day is shorter, so the ground is colder, Kocin said.

“The sun is getting higher in the sky; this cannot last much longer,” he said, adding that before too long summer’s warmth will be here and people will be complaining about the heat.

“It would be nice to have a little spring in between,” he said.

You May Also Like
2013 Is 6th Warmest Year; Climate Change Contributes
The Best View You’ll See of the Spring Equinox
A Cold U.S. Winter for Sure, but 8th Warmest Globally
White House Brings Together Big Data & Climate Change