Three million properties in England, including No. 10 Downing Street, are at risk of flash flooding, according to new maps published by the Environment Agency on Thursday.

The maps, the first of their kind to be made available to the public, were described by the agency as a “vital service,” enabling homeowners to check their level of risk. 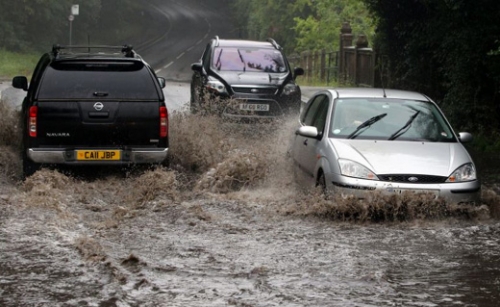 But ministers have been criticized because an affordable home insurance scheme being developed does not take account of the risk of flash flooding, or the warning from the government's own advisers that climate change will increase flooding.

Intense downpours are becoming more common according to the Met Office, and when water overwhelms the drains, it leads to flash flooding, also called surface water flooding. In total, 5 million properties in England are at risk of flooding, when those threatened by river and coastal floods are also counted.

“We have used cutting edge technology to map areas at risk of surface water flooding in England,” said Paul Leinster, chief executive of the Environment Agency. “These maps are now amongst the most comprehensive in the world. With one in six homes in England at risk of flooding we urge people to check if they are at risk.”

The government is currently bringing forward a new insurance scheme with the ABI where a premium on all policies ensures people in high risk areas can obtain affordable insurance. But Guy Shrubsole, at Friends of the Earth, said: “In the light of all the scientific evidence, it is astonishing that the environment secretary Owen Paterson's new flood insurance scheme fails to factor in risks from both surface water flooding and future climate change.”

Maria Eagle, Labor's shadow environment secretary, said: “Paterson is in denial about the scale of the threat from climate change, and the increase in flooding that will be the result of a failure to act. This is evident in the decision not to consider the increase in homes that will be at risk from flooding in the proposed Flood Reinsurance scheme, despite warnings from the Committee on Climate Change.” 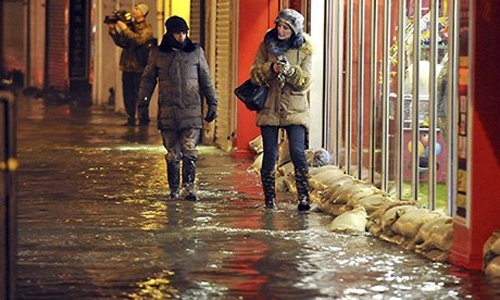 Increased flooding is the greatest threat posed by climate change in England, according to the government's own research.
Credit: Dobson Agency/REX

Environment minister Dan Rogerson said: “We understand the damage and the stress that flooding can cause. That's why we're spending an unprecedented amount of money on protecting communities from flooding and coastal erosion.” Annual flood defense spending will rise between 2015 and 2020 but fell sharply when the coalition government took power, leaving hundreds of defense schemes unbuilt.

A spokesman for the Department of Environment, Food and Rural Affairs (Defra) added: “Flood Re is designed to be flexible so it can adapt to climate change.”

Increased flooding is the greatest threat posed by climate change in England, according to the government's own research. Defra is responsible for the national program on adapting to climate change, but in May the officials working on the issue fell from 38 to six.

Commenting on the new flood insurance scheme not including surface water flooding and climate change risks, Bob Ward, policy director at the Grantham Research Institute on Climate Change and the Environment at the London School of Economics, said: “Defra is unable or unwilling to perform the analysis needed to ensure that its plans are robust, and is a further example that it has been failing, since the appointment of Paterson as environment secretary, to ensure that the UK adapts to the impacts of climate change, particularly flooding.”

Ward said: “The alarming truth is that Defra's continuing preference for basing policies upon Paterson's ideological views on climate change, rather than on expert scientific advice, is placing the lives and livelihoods of millions of people in the UK at risk.”