Plans for the world’s biggest offshore wind farm have been given the green light by the energy secretary, with planning permission for an array of up to 400 turbines 80 miles off the Yorkshire coast on the Dogger Bank. 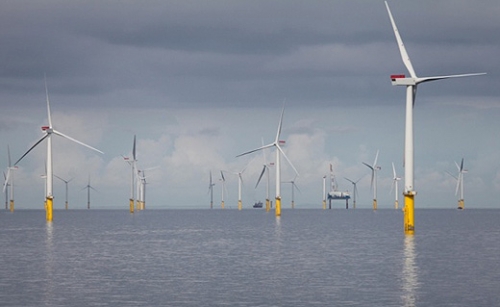 The Gwynt y Mor offshore windfarm off the coast of north Wales. The Dogger project will be an array of up to 400 turbines 80 miles off the Yorkshire coast.
Credit: Alamy via The Guardian

The project, more than twice the size of the UK’s current biggest offshore wind farm, is expected to cost $9.2 billion to $12.3 billion and could fulfill 2.5 percent of the UK’s electricity needs.

Covering about 430 square miles, the Dogger Bank Creyke Beck project will — if fully constructed — generate enough electricity to power nearly 2 million homes, and could support an estimated 900 jobs in Yorkshire and Humberside, according to the government.

Ed Davey, the Liberal Democrat energy and climate change secretary, said: “Making the most of Britain’s home-grown energy is creating jobs and businesses in the UK, getting the best deal for consumers and reducing our reliance on foreign imports. Wind power is vital to this plan, with £14.5 billion invested since 2010 into an industry which supports 35,400 jobs.”

Although the UK does not manufacture large wind turbines, the Department of Energy and Climate Change says half of the costs associated with building and operating a wind farm are spent buying services and products from UK businesses.

Dogger has long been mooted as a possible location for offshore windfarms, because the shallow seabed, only about 30 meters deep, should make it easier to lay foundations and construct large turbines there, but no company has yet ventured into the area.

If built, the Creyke Beck turbines would be the furthest offshore that have ever been attempted. They would be the first stage of a project that could eventually be three times the size, if further tranches are also constructed.

Nick Medic, director of offshore renewables at RenewableUK, the wind industry association, said: “This is an awesome project and will surely be considered as one of the most significant infrastructure projects ever undertaken by the wind industry. Dogger Bank demonstrates the sheer potential of offshore technology to turn our vast ocean and wind resources into green energy.

“Making the most of Britain’s home-grown energy is creating jobs and businesses in the UK, getting the best deal for consumers and reducing our reliance on foreign imports.” — Ed Davey

“It is a project that pushes the offshore engineering envelope, demonstrating how far this technology has evolved in the 10 short years since the first major offshore wind farm was installed in North Hoyle just five miles from shore.”

Construction of the first turbines could still be years away, however. The Forewind consortium which is behind the 2400 MW capacity project has yet to make a final investment decision. The consortium comprises Scottish and Southern Energy, Germany’s RWE, and Norway’s Statoil and Statkraft, the former the country’s majority state-owned oil business and the latter its state-owned electricity company.

Though the granting of planning permission may encourage a positive decision, the falling oil price and uncertainty over what may happen to wind energy subsidies after the general election make long-term investments in the sector more fraught.

About $9.2 million has been spent by the companies so far on surveys alone. 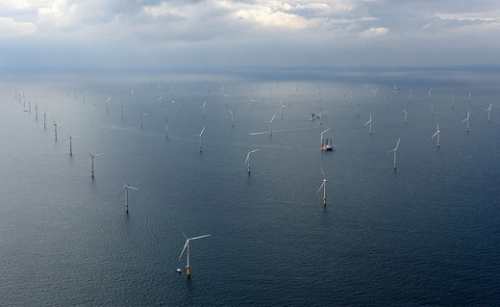 The Sheringham Shoal Offshore Wind Farm is a 317 MW wind farm and has been in operation since 2012.
Credit: Statkraft/Flickr

“Achieving consent for what is currently the world’s largest offshore wind project in development is a major achievement and will help confirm the UK’s position as the world leader in the industry,” said Tarald Gjerde, general manager for Forewind.

The consortium said the Creyke Beck project could create up to 4,750 new direct and indirect full-time equivalent jobs and generate more than $2.3 billion for the UK economy, especially in Yorkshire and Humberside owing to their “historic strengths, existing skills in large-scale production activities and a marine support legacy.”

The UK’s last biggest offshore wind site, the London Array, ran into difficulties soon after gaining the government’s green light in a long drawn-out process from 2005 to 2007. Costs spiraled, investors withdrew backing and the future of the project for long periods hung in the balance. However, the wind farm, with 175 turbines, was inaugurated in 2013.

The UK currently has about 1,200 offshore wind turbines, with a total generating capacity of about 4 GW.