Large Iceberg Poised to Break Off From Antarctica

A rift that has been wending its way across Antarctica’s massive Larsen C ice shelf just made another leap forward, growing by more than 10 miles, scientists monitoring it reported Thursday. 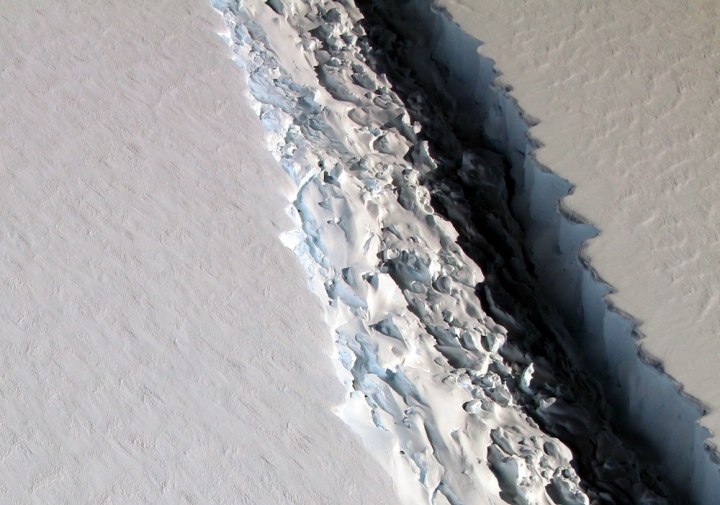 A large rift in Antarctica's Larsen C ice shelf, photographed by NASA's IceBridge mission on Nov. 10, 2016. The rift surged ahead by about 10 miles in late December.
Click image to enlarge. Credit: NASA/John Sonntag

Now, a chunk of ice bigger than New York's Long Island is hanging on by a relative thread. When it breaks off — possibly very soon — it could put the ice shelf in a more precarious position that could eventually lead it to disintegrate. That could contribute further to the global sea level rise that is threatening the many populous cities that lie within a few miles of the world’s coasts.

“This event will fundamentally change the landscape of the Antarctic Peninsula,” the scientists at Project MIDAS, an Antarctic research effort that has been watching the rift closely, wrote in update.

The rift runs for more than 50 miles from south to north across the ice shelf, which is a vast platform of ice floating atop the ocean.

The stability of ice shelves is important because they help buttress the huge glaciers that feed them. When an iceberg calves off an ice shelf, there is less ice to push back on the glaciers, causing them to speed up. In a stable system, the front of the ice shelf eventually moves forward until the whole system is once again in balance.

While calving is a natural process, it can be driven into overdrive by the warm ocean waters that are lapping away at the ice shelves that fringe Antarctica. When calving events happen too quickly in succession, the glacier-ice shelf system doesn’t have time to rebalance, which can result in glaciers continuing to speed their flow, bringing more and more ice into the oceans and raising sea levels.

This is what happened with Larsen C’s northern neighbors, Larsen A and B, which collapsed spectacularly in 1995 and 2002, respectively. The glaciers that had fed Larsen B flowed six times faster after its demise.

The world’s oceans have already risen by an average of 8 inches over the last century from a combination of water added by ice melt and the expansion of ocean waters as they warm. The entire West Antarctic Ice Sheet, of which Larsen C is a part, holds enough ice to raise sea levels by another 10 to 13 feet if it were all to melt.

Scientists are worried that Larsen C, which is 10 times the size of Larsen B and the fourth biggest ice shelf in Antarctica, could eventually follow in its neighbors’ footsteps, though they don’t think it will destabilize as quickly because it hasn’t shown the same surface melt that helped drive Larsen B to collapse. 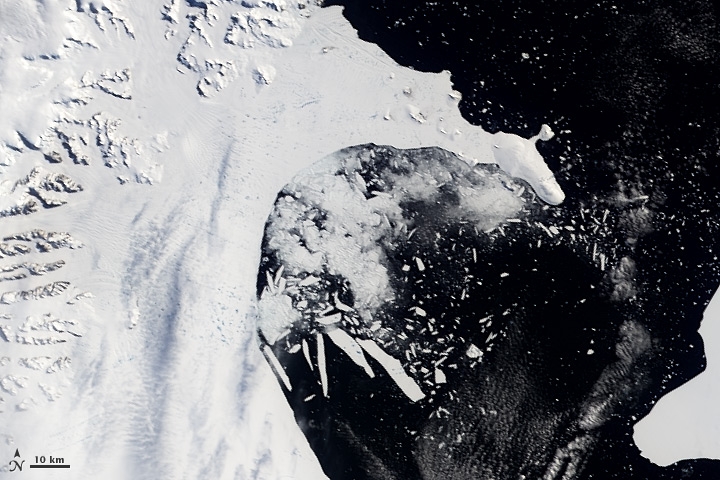 The Project MIDAS team and other Antarctic researchers have been watching the rift in Larsen C grow for several years and spotted another surge earlier this year.

After that, the rift seemed to progress at a fairly steady pace until another surge in late December. It is now “primed to shed an area of more than 5,000 square kilometers” (about 1,900 square miles), the MIDAS team wrote in their update.

When it does so, the ice shelf will be in its most retreated position on record, which modeling done by the MIDAS team suggests will be more unstable than its current configuration.

How long it will take for the rift to reach the edge of the ice and cause the iceberg to calve is still uncertain and depends on factors like local winds and sea ice conditions, MIDAS team member Daniela Jansen, a glaciologist at the Alfred Wegner Institute in Germany, said in an email, though she thinks it is “very close.”

Dan McGrath, a glaciologist at Colorado State University, was less certain, saying the rift still had to progress through a zone of ice that may cause it to slow down again.

“There are still many more open rather than ‘closed’ questions on the rift and the subsequent response of the ice shelf to this perturbation,” he said in an email.

You May Also Like:
U.S. on Track to Become Net Energy Exporter by 2026
Potential for Collapse of Key Atlantic Current Rises
Exxon’s $180 Million Deal With Trump’s Pick for State
There Were a Crazy Number of Record Highs in 2016