The year-to-date has been the sixth warmest on record globally, and July was also the sixth warmest such month since global surface temperature records first began in 1880, according to new data released on Tuesday by the National Oceanic and Atmospheric Administration (NOAA). The figures show that July 2013 was the 37th straight July, and the 341st straight month, with warmer-than-average global temperatures — a more than 28-year timespan that reflects the significant warming observed worldwide since the 1970s. 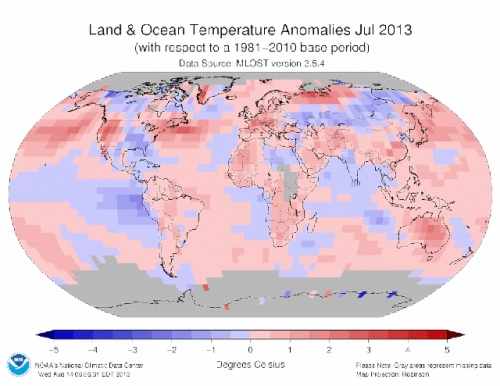 That means that no one under the age of 28 has ever experienced a month in which global average surface temperatures were cooler than average (based on the 20th century average).

Leaked drafts of a forthcoming report from the U.N. Intergovernmental Panel on Climate Change, a United Nations-sponsored group of scientists tasked with assessing the scientific evidence on climate change, show that the group is likely to more conclusively tie this warming to manmade greenhouse gas emissions, compared to the group’s last major assessment in 2007.

According to NOAA, the last July that had an average global temperature below the 20th-century mean was July 1976, and the last below-average month was February 1985.

The year-to-date tied with 2003 as the sixth warmest such period on record, with an average global land and sea surface temperature of 1.06°F above the 20th century average, NOAA said.

Areas of the globe that were unusually warm during July included the western and northeastern U.S., much of Africa, western and central Europe, parts of southern Asia, and most of Australia, which had its third-warmest July on record.

The U.K. also had its third-warmest July, and it was the warmest July and second-warmest month on record for Northern Ireland, according to preliminary data.

Austria, which has an unusually long temperature record that dates back to 1767, had its second-warmest July, with a nationally averaged temperature that was 4°F above average.

Despite the absence of El Niño conditions in the tropical Pacific, which can increase sea surface temperatures, global ocean temperatures were still the fifth warmest on record for July. 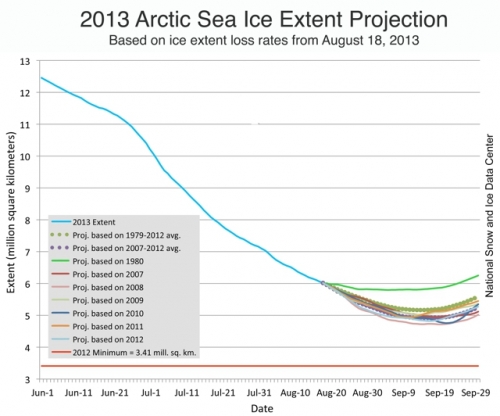 Arctic sea ice projection showing the likelihood that the ice will not break the record low, which was set in 2012.
Credit: NSIDC.

July falls during the height of the Arctic melt season, and Arctic sea ice, which reached a record low after the 2012 summer melt season, declined at the second-fastest rate on record for the month, with an average loss rate of 41,000 square miles per day. That is like losing an area of ice the size of the state of Virginia on a daily basis.

Sea ice extent tracked above last year’s record, however, with the average July sea ice extent running 483,000 square miles below the 1981-2010 average, making it the fifth-smallest July Arctic sea ice extent since the beginning of satellite observations there in 1979.

According to the National Snow and Ice Data Center in Boulder, Colo., the sea ice extent at the end of this melt season should not break last year’s record low.

Meanwhile, in the Southern Hemisphere, where it is still winter, Antarctica saw its second-largest July sea ice extent on record. That is in keeping with recent trends that climate studies have shown to be linked to local ocean currents and air circulation patterns, and is consistent with a warming world.

While the sea ice bordering Antarctica has been growing slightly during the past few years, the massive ice sheets that sit directly atop the frozen continent are shrinking, thereby raising global sea levels.