With winds gusting up to 160-180 mph, Cyclone Ita is barreling toward the northern coast of Queensland, Australia, where its violent winds and high storm surge could cause considerable damage.

Ita unexpectedly intensified rapidly on Thursday and its winds would make it a Category 4 hurricane in the Atlantic Ocean. 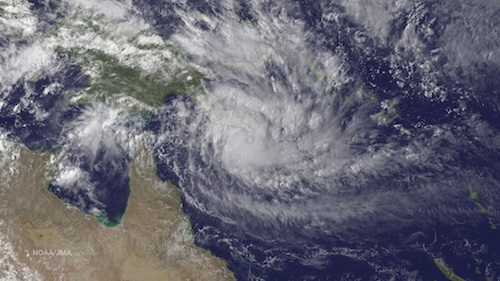 Severe Tropical Cyclone Ita bears down on the coast of Queensland, Australia, in this image taken by satellite on April 9, 2014, when the storm was a Category 3.
Credit: NOAA

Different wind speed measurements are used to rate storms in different ocean basins around the world; according to the U.S. Navy’s Joint Typhoon Warning Center, Ita’s gusts are reaching 160 mph, while Australia’s Bureau of Meteorology puts them at 180 mph. Matching its winds to the Saffir-Simpson strength scale used in the Atlantic basin, Ita is a Category 4 storm, though it is a Category 5, the most intense level, on the scale used by the BOM. (The name “cyclone” is used around Australia for what is called a hurricane in the Atlantic.)  Ita intensified from a Category 2 ranking in less than 24 hours, fueled by warm ocean waters that drive the convection at the storm’s heart and by low wind shear (the difference in wind speed and direction at different heights in the atmosphere, which can cut off a developing storm).

No models predicted the storm’s sudden intensification, which hurricane expert Brian McNoldy, of the University of Miami, said “is still quite a challenge to predict.” This is partly because the processes that drive the rapid strengthening happen at a smaller scale than models can typically resolve, said Steve Land, a research meteorologist at NASA’s Goddard Space Flight Center.

Ita’s ferocious winds are also whipping up a potentially high storm surge in front of the storm, posing a serious threat for coastal flooding.

“When you get these really strong winds it really pushes a lot of water,” said Hal Needham, a storm surge specialist at Louisiana State University.

Because cyclones in the Southern Hemisphere spin in the opposite direction of those in the Northern Hemisphere, the main storm surge push will be to the storm’s south. Storm surge is a highly localized event, Needham told Climate Central, with both characteristics of the storm itself and the local coastline affecting its levels. Some of the places particularly at risk are bays along the coastline, which can funnel storm surge waters ashore, Needham said. Current forecasts put the storm making landfall to the north of Cooktown at about 4 p.m. local time Friday (2 a.m. EDT).

Authorities have issued warnings along the eastern coast of the Cape York Peninsula down to the city of Cairns, a staging ground for tourists headed to the Great Barrier Reef. They are warning residents with houses built before 1985 to seek shelter elsewhere and have told others to ensure they have emergency kits assembled and that cellphones are fully charged before the storm hits. 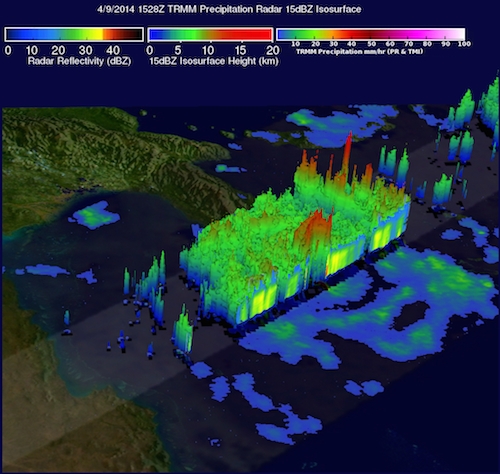 NASA's TRMM satellite got this “cut-away” view of Cyclone Ita on April 10, 2014. The heights of the clouds along its eye wall (the red semicircle in the middle of the storm) reached about 8.7 miles up in the atmosphere. Cloud heights help indicate the intensity of a storm.
Credit: NASA

The cyclone threat isn’t an unusual one for the region, which typically sees nearly five storms in a season, according to the BOM. Some of Australia’s worst tropical cyclones have hit this region in the past. Most recently was Cyclone Yasi, which struck in 2011 as a Category 5 storm on the Australian scale. It was the costliest cyclone ever to hit Australia, causing an estimated $3.5 billion in damage, according to news reports at the time.

Cyclone Ita’s impact could help shed light on another notable storm that hit the area, Cyclone Mahina, which struck in 1899 and is thought to be tied with a storm that hit Bangladesh in 1876 for creating the largest storm surge ever recorded. Various lines of evidence suggest Mahina’s surged reached up to 45 feet, Needham said, though there is uncertainty about that number and some scientists don’t think it’s possible to see such a high surge in this area.

But Ita may help tell whether or not that is the case, depending on what it’s storm surge does.

“This could help provide a better historical context,” Needham said. And understanding the history of an area’s storm activity helps better predict its future activity, particularly with the open question of how global warming will impact tropical cyclones around the world.

The research done to date doesn’t suggest that global warming will increase cyclone activity around Australia, according to the BOM, and one study has suggested activity in modern times has been lower, McNoldy said.

Some studies have suggested, though, that there could be more storms in the most severe categories, the BOM notes, as research has also suggested is the case in the Atlantic Ocean. And sea level rise is expected to exacerbate storm surge from tropical cyclones.

You May Also Like
U.S. Drought Retreats 15 Percent in One Year
Cheap Solar Power Pushes Renewables Growth Worldwide
U.S. Corn Belt the Most Productive Region in the World?
Tornado Season Is Here: Watches Out Across Mid-South