Heat is Piling Up in the Depths of the Indian Ocean

The world’s oceans are playing a game of hot potato with the excess heat trapped by greenhouse gas emissions. 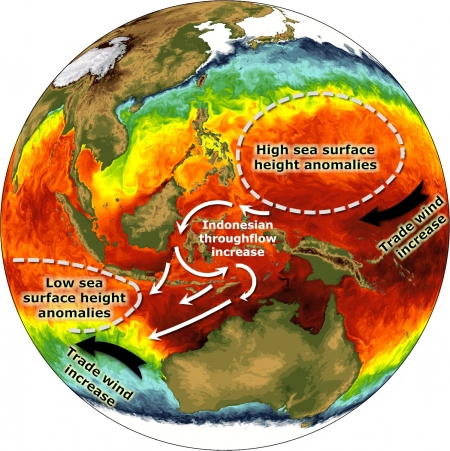 An illustration showing movement of water from the Pacific to the Indian Ocean.
Click image to enlarge. Credit: Lee et al., 2015

Scientists have zeroed in on the tropical Pacific as a major player in taking up that heat. But while it might have held that heat for a bit, new research shows that the Pacific has passed the potato to the Indian Ocean, which has seen an unprecedented rise in heat content over the past decade.

The new work builds on a series of papers that have tracked the causes for what’s been dubbed the global warming slowdown, a period over the past 15 years that has seen surface temperatures rise slower than they did the previous decade. Shifts in Pacific tradewinds have helped sequester heat from the surface to the top 2,300 feet of the ocean. But unlike Vegas, what happens in the Pacific doesn’t stay in the Pacific.

Since 2003, upper ocean heat content has actually been slowly decreasing in the Pacific.

“When I first saw from the data that Pacific temperature was going down, I was very curious and puzzled,” Sang-Ki Lee, a scientist at the Cooperative Institute for Marine and Atmospheric Studies, said.

Lee, who led the new research published in Nature Geoscience, looked at records going back to 1950 and noticed that the Indian Ocean heat uptake “was pretty much flat” until 2003. Suddenly, heat began to build there, but it wasn’t coming from above.

By running ocean circulation models, he found that the heat stashed in the Pacific had hitched a ride on the ocean conveyor belt and danced its way through the Indonesian archipelago, ending up in the Indian Ocean. The Indonesian shuffle means that the Indian Ocean is now home to 70 percent of all heat taken up by global oceans during the past decade.

“This is a really important study as it resolves how Pacific Ocean variability has led to the warming slowdown without storing excess ocean heat locally,” Matthew England, a professor at the University of New South Wales, said. “This resolves a long-standing debate about how the Pacific has led to a warming slowdown when total heat content in that basin has not changed significantly.”

England led previous research that examined the role of the tradewinds in the Pacific’s heat uptake.

Tom Delworth, a climate modeler at Geophysical Fluid Dynamics Laboratory who has also examined the Pacific trade winds in the hiatus, agreed, though he noted, “the results are very interesting, but I’m not sure they help us with predicting the future evolution of the hiatus.”

Ocean heat content has risen dramatically over the past decade even as surface temperatures have not. Globally, oceans account for 93 percent of the heat that has accumulated on the planet since 1970 due to human greenhouse gas emissions.

A flurry of recent research shows that the current slowdown in surface warming could end in the near future as Pacific trade winds shift, allowing for less heat to enter the ocean.

In its current location, Lee said it’s possible that the warm water in the Indian Ocean could affect the Indian Monsoon, one of the most important climate patterns in the world that affects more than 1 billion people. The current El Niño stewing in the Pacific could be also be affected.

“It seems pretty clear that an El Niño event (such as this year) would reverse this anomaly, at least while the El Niño is underway,” Delworth said.

What its means for future El Niño cycles is less clear, however.

Lee said it’s likely to continue globe trotting along the ocean conveyor belt and find its way to the Atlantic in the coming decades.

“If this warm blob of water in upper Indian Ocean is transported all the way to North Atlantic, that could affect the melting of Arctic sea ice,” Lee said. “That can also increase hurricane activity and influence the effects of drought in the U.S. These are simply hypotheses that need to be tested and studied in the future work.”

You May Also Like:
May CO2 Peak Shows Trend Is Up, Up, Up
With Climate Change, Ticks Marching Farther and Earlier
Washington’s ‘Wet Drought’ Gets Worse
Canada Sets Goal to Cut Emissions by 2030