The LC-130 Hercules flew low over the ice sheet in a tight grid pattern, Teflon-coated landing skis barely 300 meters above the soft upper layer of snow. At the rear of the plane, scientists clustered round a monitor displaying a regular pattern of dark red waves generated by a radar signal.

Somewhere in the vast, white emptiness below were two tiny cracks – barely 4 inches across – imperceptible to the naked eye from this altitude, especially beneath fresh snow. 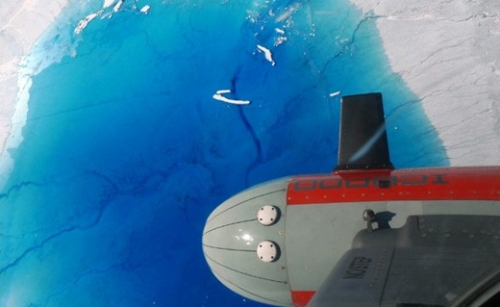 As the ice sheets on Greenland melt, scientists develope an icepod that can measure and photograph the effects of climate change.
Credit: The Guardian

But the cracks ran across an ice runway providing the only access to Camp Raven, a research outpost and extreme weather training center for the U.S. military, perched atop 1.25 miles of ice on one of the highest, coldest points on the Greenland ice sheet. If the researchers could detect cracks that small, it would constitute a scientific triumph.

The 10-strong team from the Lamont-Doherty Earth Observatory at Columbia University are testing a suite of airborne radar and imaging systems known as IcePod, designed to track changes in the Greenland ice sheet. It would also confirm early signs of instability in the ice.

The latest research into how melting happens has proved more interesting and complicated than researchers initially thought – not just gusts of warm air or dramatic spectacles of chunks of ice calving into the sea. It is now clear that melting has been happening rapidly in some parts of Greenland, and that melt water can itself bring about new melting. All this matters because ice melt in Greenland is the single largest cause of global sea level rise, which is affecting coastlines around the world.

Last month, Greenland had its warmest day since records began in the late 1950s, with the weather station at Maniitsoq (Sugar Loaf) on the south-western coast registering 78.6F on the afternoon of  July 30, the Danish Meteorological Institute reported.

And on July 11-12 last year, gusts of warm air caused melting on virtually the entire surface of the ice sheet. The melt water pouring off the glaciers washed out the main bridge at the town of Kangerlussuaq, the hub for scientists studying the Greenland ice sheet. All this is straining the ice sheet in various locations.

“The ice is failing. The ice is getting stretched,” said Robin Bell, the geophysicist leading the IcePod mission.

The LC-130s, the military's cargo haulers, had landed at Camp Raven all season without incident, but the ice sheet is weakening, she said.

“Ice is like silly putty. If you move it slowly it goes like this,” she said, drawing her hands slowly apart. “But if you yank it, it will snap … That is what is happening with the ice sheet.”

The cracks at Raven would eventually turn into big crevasses, she said. Would the radar be able to discern those cracks? “If we could see 10 cm cracks I would be really jazzed,” Bell said.

It was during the extraordinary melt last year that crew at the New York Air National Guard, walking on the ice runway, discovered the cracks at Camp Raven.

“They are in close proximity to the ski way, but are not affecting any of our operations right now,” said Major Joshua Hicks, as he flew the C-130 in a series of passes over the runway. “We're not talking large crevasses, that would be a problem. We are talking small, small cracks that we are monitoring.”

But they can become a hazard. Some years ago, in Antarctica, the landing ski of a U.S. Air National Guard aircraft became caught in a crevasse beneath the snow and the aircraft sank into the ice. “We want to watch for them to make sure they are not going to get any larger,” Hicks said. The camp sits on the flanks of the central mountain range. The site has a year-round population of two. The only permanent structure is an abandoned cold war-era domed radar installation which once guarded against a possible Soviet missile attack on North America.

But Raven is used during the summer by researchers and the New York Air National Guard to test pilots on the ice strip landings used in Greenland and Antarctica.

The pace of change has turned Greenland into a destination for scientists gathering evidence of climate change in real time and trying to predict its consequences. Satellite evidence indicates that Greenland has experienced continuous melting and ice loss for the past 22 years. The researchers aim to understand what this will mean for the ice sheet and what impact the melting will have globally. 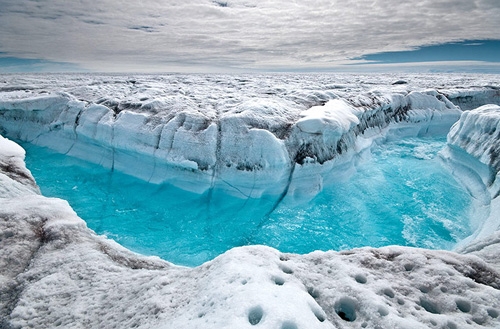 The melting of Greenland's on-land ice is the leading contributor to sea-level rise.
Credit: No Clean Singing

In high summer, Kangerlussuaq in the south-west of the island is overrun by scientists. On their side of town, in a row of barracks-type buildings, researchers study every aspect of ice sheets and glaciers and how they change: how they calve, what happens when ice meets fjord, snow crystal structures and sediment deposits. Some of those changes were clearly visible from the bubble observation window at the rear of the IcePod team's LC-130, and on the feeds from the instruments bolted to a capsule on the side of the plane.

The IcePod project combines five instrument sets: a scanning laser to measure the ice surface, a radar trained at the upper crust of the ice sheet, another radar to penetrate to the bedrock up to 2,700 meters beneath the ice, a visual camera and an infrared camera producing thermal images. The instruments were shrunk and installed in a capsule bolted to the left of the plane.

The idea was to produce a regular data record of changes in the ice sheet, in far greater detail than is possible with satellite picture resolution, and covering far more ground than a traditional expedition.

The pod was also designed to be self-contained. “Traditionally, we built our systems into the plane structure,” said Nick Frearson, the senior engineer for the project.

With IcePod, however, he added: “We can piggyback on missions. The Air National Guard can bolt the pod on to the plane, and we can kind of get that data for free.”

As the plane flew low over the ice sheet on a test run last month, from Russell glacier towards the interior of Greenland, the ice at lower elevations was grimy from dirt forcing its way to the surface, the snow cut by countless black creases.

Deeper inland, the ice sheet turned cleaner and whiter, the surface cut by occasional long and winding channels of water or pools in a startling bright turquoise. Near Summit camp, the highest point on the ice sheet, there was nothing to see but white. But even at those elevations, the ice was moving, albeit at only a few centimeters every year.

On the edges of the ice – especially where ice meets water – the team saw ice melt proceeding rapidly. On the west of the island, Jakobshavn glacier was sliding into the fjord at an average of seven miles a year. Petermann glacier in north-west Greenland last year shed an iceberg twice the size of Manhattan.

And at the top of Greenland, where the ice is two miles deep, it is not melting because of the sun alone, said Kirsty Tinto, a Lamont geologist with the IcePod team. “It has become increasingly clear that it isn't just the balance of solar radiation that is melting the ice,” she said.

The instruments inside the IcePod capsule provided a closer view of those changes occurring at the surface than existing satellite images.

The researchers hoped to study the waterways at the top of the ice sheet, which transport water across the ice or funnel it down towards the bedrock.

Some formations, known as moulins, have been known to drain entire glacier lakes in a matter of hours, drawing the water right down to the bedrock. That water layer beneath the ice in turn speeds the ice sheet's slide towards the ocean.

Scientists are also studying what happens when glaciers meet ocean, and how the mixing of fresh and salt water accelerates ice loss. And they hope to track those changes across the seasons, through regular flights.

“It is sort of being able to capture the pulse of the ice sheet several times a year,” said Bell. “We used to think it happened slowly. Now we know it is happening on a human time scale.”

In 2007, an international team of scientists set out to map 8,900 feet mountains beneath the snow and ice of eastern Antarctica.

The survey of the Gamburtsev range involved scientists from seven countries, camped for months on either side of the range. Their only direct connection to the outside world was through military cargo planes, which flew in supplies and performed 17 airdrops of fuel.

The high-altitude and dangerous enterprise took two years and cost about $25 million, and when the survey was complete some researchers asked themselves: why not use a plane?

The scale of that ambitious exercise was the inspiration for IcePod. The $5.9 million initiative was launched in 2009 with a grant from Barack Obama's recovery act. It represents the latest effort to study the vast expanses of the Greenland and Antarctica ice sheets using satellite data and aircraft mounted systems instead of boots on the ground – or boats in a fjord clogged with icebergs. 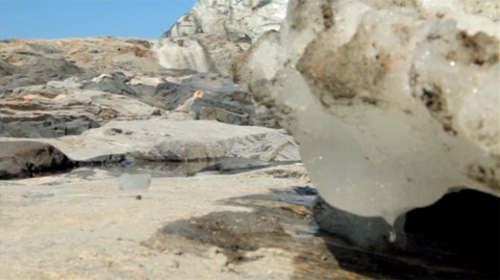 The latest research into how melting happens has proved more interesting and complicated than researchers initially thought.
Credit: The Guardian

“You don't bring an ice breaker up into these fjords to do traditional oceanography because there are so many icebergs. It's not a place you want to go. It's not a very safe environment,” said Chris Zappa, an oceanographer with the project. “The beauty of this instrument package is that we can do this cutting edge science and learn more about how the process occurs.”

The IcePod suite deploys five instrument systems in combination to generate more targeted and higher resolution images than available by satellite. Unlike earlier systems, the IcePod is entirely self-contained, and can be swapped out on to different aircraft.

The use of aircraft also allows for more regular data collection, with researchers planning three visits a season to Greenland.

Scientists increasingly are looking for such targeted images, Zappa said. “Until now people have studied the whole ice sheet,” he said. But he added: “It's becoming more and more important to understand the surface processes.”

Other projects have used similar instruments to track the changes in the ice sheets, but Lamont's version was the first time an entire suite of instruments had been collapsed in size and deployed together, the scientists said.

The biggest challenge was shrinking the instruments so they would fit inside a capsule measuring 8 feet by 2 feet.

“It is no mean feat trying to shoehorn all these things into a small cigar-shaped box, and to try and get a good data reference set from it,” said Nick Frearson, the senior engineer on the project.

Then there was the matter of compensating for the movement and vibration of the host aircraft to avoid blurred images, or data crashes from disconnecting cables.

“The plane pitches and rolls. It is not flying in dedicated straight lines. These are all things that have to be accounted for,” Frearson said.

The suite includes a scanning laser to measure the ice surface, a radar trained at the upper crust of the ice sheet, about 100 to 200 yards, another radar to penetrate through 2 miles of ice to the bedrock below, a visual camera, and an infrared camera.

The infrared camera produces thermal images of the ice sheet, enabling researchers to track temperature changes deep down inside crevasses on the surface of the ice sheet, or trace the circulation patterns of icebergs as they float off into the fjord.