Cities Are Already Suffering From Summer Heat. Climate Change Will Make It Worse

NEW YORK, N.Y. — Tina Johnson has a sense of place. She’s a fourth-generation New Yorker who lives in the same apartment in West Harlem’s Grant housing development that her grandparents lived in. She calls that apartment her anchor and the nine buildings that make up the development towering above 125th Street — home to roughly 4,400 residents spread across nine high rises — a small town.

“I have fond memories (of here) and this sense of belonging I want my children to have,” she said.

To keep that sense of place is going to take some work, though. Changes outside that “small town” nestled in a city of 8 million will only compound the stresses altering West Harlem. 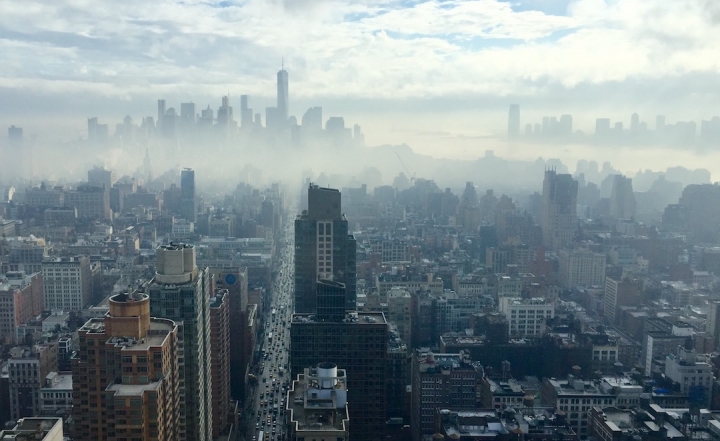 A mix of poverty, a lack of services and aging infrastructure already make West Harlem one of the most vulnerable communities in Manhattan.

Climate change is putting further stress on Johnson and the 110,000 people that call the neighborhood home. And the biggest threat is rising temperatures.

As carbon pollution turns up the planetary heat, the impact is clearest on what’s happening to extremely hot days: They’re becoming more common and more intense.

New York has averaged 3 days above 95°F over the past 20 years. If carbon pollution continues on its current trend, by 2075 that number is likely to increase to 31 according to a new Climate Central analysis.

Myriad cities across the country will be far worse off, though. Atlanta is projected to see 69 days above 95°F, Boise could spend 80 days above that threshold while Dallas is on track to have 140 days above 95°F. Then there’s Phoenix, where residents could have to contend with more than half of the year above 95°F (163 days in case you’re wondering).

The biggest factor in the number of future hot days is how fast the world reins in carbon pollution today. However, even if emissions are dramatically cut, every place across the U.S. will face more hot weather.

But extreme heat is hardly some far-off problem for 2100. It’s already taking a toll on people and influencing the decisions they make.

For Johnson, living in public housing means paying a surcharge of $18 per month to keep air conditioning in her apartment. Her grandparents didn’t believe in getting an air conditioner both because of the cost and a “tough it out” attitude. Johnson herself used to tease her kids when they complained it was too hot, but she finally relented, especially as warm weather has become more common in New York.

“When I was growing up here, I knew the summer was going to be hot,” she said. “There might be some hot days, but there was a regular pattern of it getting really hot the first weeks of August and then summer would start to peter out. Now it’s harder to predict the weather.”

But because of New York City Housing Authority rules and antiquated wiring, she can only have two air conditioners in her apartment. In hot months, that effectively turns her three-bedroom apartment into a two-room apartment.

Johnson spends her summers sleeping in the living room with her two sons. Her 20-year-old daughter gets a small portable unit to herself and a series of fans to stay cool, but family tensions tend to bubble up more in the summer without enough space for everyone.

Access to adequate air conditioning isn’t just about maintaining family relationships, though. Staying cool can be a matter of life and death. In New York, that heat sends 450 people to the emergency room and kills 121 people directly or indirectly on average each year. A study published last year by Columbia University researchers showed that the city could see 3,331 heat-related deaths by 2080.

It will take more than air conditioning to make West Harlem a safe, habitable neighborhood if carbon pollution continues to rise.

Cutting carbon pollution will help mitigate some of the heat stress, but cities and towns across the country will have to act soon to protect citizens and the infrastructure and services upon which they rely.

New York just unveiled a $100 million plan to kickstart that preparation. It focuses on the most vulnerable areas like Harlem, the South Bronx and other underserved neighborhoods.

“We know we can’t do business as usual dealing with heat impacts,” Kizzy Charles-Guzman, the deputy director of the New York Mayor's Office of Recovery and Resiliency, said. “We need to prepare now.”

There’s a layer of urgency for cities like New York. Summer days in the city are up to 14°F hotter than rural areas due to the urban heat island effect, a byproduct of all the pavement in cities trapping more heat than the trees and fields. But there are heat islands within heat islands. Where Johnson lives in Harlem is one of them, underscoring that climate adaptation is as much a social justice issue as one of engineering and infrastructure (it’s also a problem playing out throughout the world).

In Midtown Manhattan, air conditioners keep office buildings cool but they release heat into the surrounding air. Breezes from the south whisk that air into Harlem and the South Bronx, intensifying the heat island effect there. 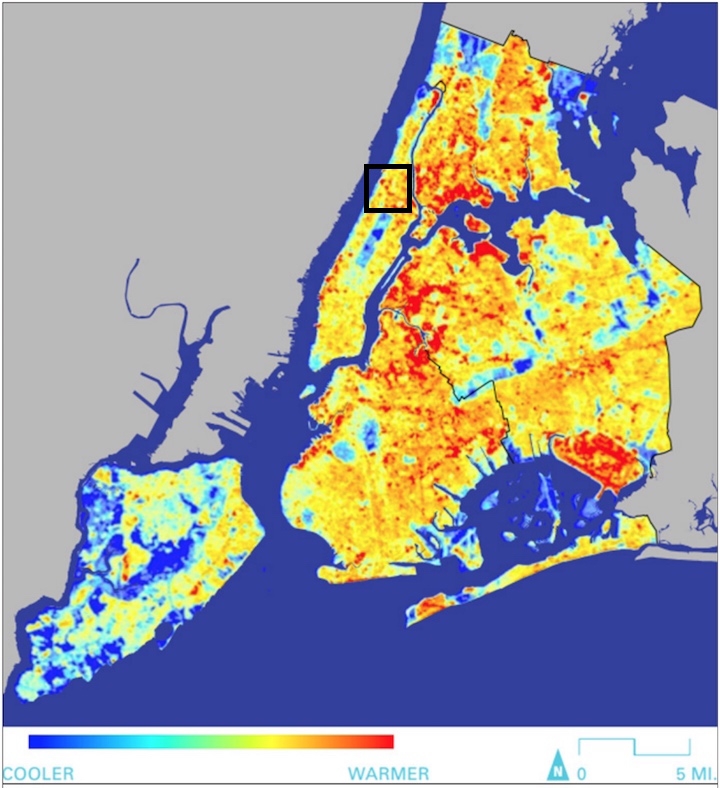 For Johnson and thousands of others suffering with limited or no air conditioning, it’s adding injury to insult. A constellation of groups including WNYC public radio and WE ACT, a local environmental justice nonprofit, put together a pioneering study dubbed the Harlem Heat Project last summer. They put thermometers in 30 Harlem residents’ apartments and found that the temperature indoors frequently exceeded the ambient air temperature outdoors, particularly at night.

Building walls throbbed with heat they had absorbed throughout the day, radiating into homes and making sleeping and recovery from the day’s heat near impossible. That puts particular stress on elderly, the young and the infirm. Those conditions are also partly why Johnson, who has lupus and can’t spend much time outdoors, decided to install air conditioning.

“The communities that will be hardest hit by climate change are already the most vulnerable to environmental pollution and inequity,” Peggy Shepard, executive director of WE ACT, said. “Heat exacerbates asthma, other respiratory problems and cardiovascular disease.”

“It puts stress on the family and the house,” Johnson said.

To help ease some of the heat, New York’s $100 million plan will cover a host of initiatives, from planting trees and painting roofs white to cut the heat island effect, to connecting neighbors so that the elderly aren’t forgotten when the mercury skyrockets.

The latter idea holds particular promise as it’s a low-cost program that could achieve major results. Charles-Guzman, the deputy director at the New York Mayor's Office, said what happened in the wake of Sandy is a textbook example.

“The neighborhoods where everybody knew each other, those neighborhoods did better (with recovery),” she said. “Not everyone wants a city worker knocking on their door. There’s low trust in government. We’re trying to capitalize on social ties people have with their neighbors.”

It’s tempting to peg New York as an outlier. After all, it’s a massive city with a vibrant economy in a deep blue state. But adapting to extreme heat is hardly the purview of rich, liberal cities.

Across the country, cities and towns of all shapes, sizes and political persuasions are reckoning with increasingly hot weather.

In Las Cruces, N.M., a city of 120,000 that sits in the shadows of the Organ Mountains, city planners are preparing residents for the even hotter future that climate change will bring.

At the town’s core is a clutch of low-slung adobe buildings punctuated by acres of parking lots that shimmer in the summer heat. Houses on the fringe of downtown blend with the desert dust and dead lawns that make up their front yards. Beyond that, the city tapers into the desert scattered with ocotillo, yucca and sagebrush.

The harsh landscape is a product of the sweltering, dry conditions that overtake the southern tier of New Mexico each summer. Even though it’s less dense than New York, trees cover just 4.5 percent of Las Cruces. On days when the temperature tops out above 108°F as it did earlier this summer, that translates to an intense heat island and very little shade for those braving the outdoors. The city is projected to see 64 days above 105°F by 2100, up from just a single day in an average year. 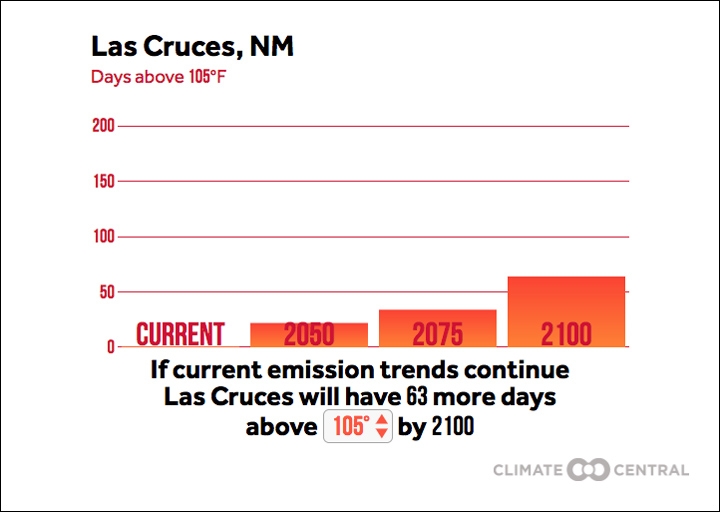 Like New York, Las Cruces is considering how to improve neighborhood awareness as a means to battle more extreme heat. But rather than focusing solely on checking in on neighbors when summer temperatures are at their hottest, city planner Lisa LaRocque said she has a vision to get neighbors helping each other with home repairs that can help keep things cool indoors.

“One of our goals is social cohesion and having neighbors help each other and know each other and create that bonding that might not otherwise occur,” she said. “(One idea is) if we are doing some of the low-hanging fruit of improving energy efficiency, we would do it as a neighborhood cooperative situation where I help you with x and someone else helps me with y.”

About 450 miles to the west of Las Cruces, city planners in San Angelo, Texas, have already glimpsed their future and are weighing how to respond. The city of 100,000 had 100 days above 100°F in 2011, an outlandishly hot year for the city. But that outlandishly hot summer could be routine if carbon pollution isn’t curbed. San Angelo is projected to have 110 days above 100°F by 2100. That’s the equivalent of running from the beginning of May through the end of September with daily temperatures near triple digits (to make matters worse, 39 of those days are projected to top out at 110°F or higher). 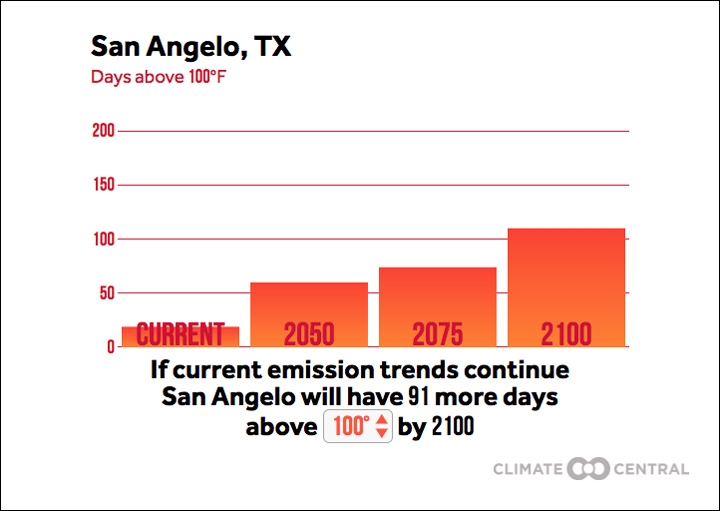 That makes the job of city planners in cities like San Angelo that much more important. When AJ Fawver, a city planner, convened a series of meetings to discuss how extreme weather affected basic city functions, managers were skeptical about why they were in the room together.

“Initially there was a feeling it only affects certain types of people,” Fawver said. “But really it affects everyone. You could see that as we went around the room” she said, rattling off how firefighters, road crews, utility workers and even the human resources department found they shared more heat-related woes than they first thought.

Weighing the impacts heat is already having on San Angelo makes the climate projections of what comes next all the more sobering. Climate scientist Katharine Hayhoe made the three-hour trip down from Texas Tech to talk with the group about what the future holds if carbon pollution isn’t curtailed. The findings painted a picture of relentless heat that will change the way the city functions and people live their daily lives.

“That was a reality check,” Fawver said. “People started thinking about their children and grandchildren and remembering how dreadful that summer was. Then it really hit home.”

San Angelo hasn’t yet decided how to tackle the hotter future that awaits it. But in a county where climate change isn’t a front-burner topic like it is in New York, the conversation is a major first step.

You May Also Like:
Tesla Joins Effort to Pair Batteries With Offshore Wind
A History of Global Warming, In Just 35 Seconds
Extreme Heat Will Hit India’s Most Vulnerable the Hardest
Alphabet Turns to Molten Salt to Store Clean Energy