LONDON − An international team of scientists plan to spend months watching ice melt. But although it will take longer and cost a lot more than watching paint dry, it will be much more interesting and rewarding. 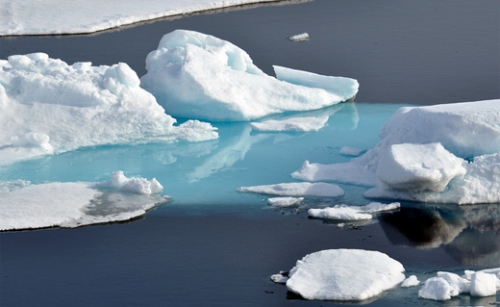 A sophisticated array of automatic sensors will allow scientists to conduct the longest ever monitoring program to determine the precise physics of summer sea ice melt in the Arctic.
Credit: U.S. Geological Survery/flickr

They plan to discover just how the Arctic ice retreats, the rate at which it melts, and the oceanographic processes at work.

The Arctic ice cap is a vital part of the climate machine, and the basis of an important ecosystem. But although the polar ice once stretched far further south, it has been both thinning and shrinking for more than three decades. This melting shows signs of accelerating, with consequences for nations far to the south, but researchers still don’t know much about the physics of the process.

So the U.S. Naval Research Laboratory, oceanographers from France and the U.S., the British Antarctic. Survey, the Korean Polar Research Institute, the Scottish Association for Marine Science, and the Universities of Cambridge in the UK and Yale in the U.S. have co-ordinated a suite of technologies to monitor every detail of this summer’s ice retreat from the Alaskan shoreline, northwards.

They will use an array of floats, buoys, sensors, thermometers, tethers, GPS receivers and automated weather stations to measure every detail, such as the flow of warmer water, growth and pattern of waves, the wind speed and direction, air pressure, and humidity.

There will be buoys fixed in the ice to record both the melting and – later in the year – its refreezing, and an array of ice-tethered profilers to monitor the changes in the upper ocean. Autonomous sea gliders, too, will be released to explore below the ice shelf and report back every time they surface.

The Arctic summer ice is an example of positive feedback. Ice reflects sunlight, so it is its own insulator, and keeps itself cold. But as it melts and retreats, the exposed darker ocean waters can absorb more radiation, and bring more warmth to the edges of the retreating ice, thus accelerating the process. 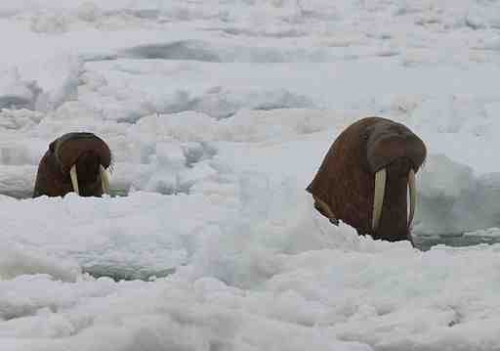 Breakthrough: walrus surfacing in sea ice off the coast of Alaska. Researchers think they understand the big picture, but now they want the confirmatory fine detail.
Credit: Joel Garlich Miller/USFWS via Wikimedia Commons

It freezes again, but – on average – each year the ice cap becomes thinner, and the total area frozen continues to shrink. Researchers think they understand the big picture, but now they want the confirmatory fine detail.

“This has never been done at this level, over such a large area and for such a long period of time,” said Craig Lee, of the University of Washington, who leads the Marginal Ice Zone Program project. “We’re really trying to resolve the physics over the course of an entire melt season.”

The project began in March, when researchers planted an array of sensors along a line 200 miles to the north of Alaska. In August, a Korean icebreaker will install more equipment, and a team from Miami is studying high resolution satellite pictures of ice floes in the region. Biologists will also want to understand the effect of temperature changes on marine micro-organisms.

“The field program will provide unique insight into the processes driving the summer melt of Arctic ice,” Dr. Lee said. “It’s the automation and unprecedented collaboration that allows us to be out there for the entire season. You couldn’t afford to be out there at this intensity, for this length of time, any other way.”