EDITOR'S NOTE: This story has been updated to reflect new forecast information on Friday, June 28.

A brutal and potentially historic heat wave is in store for the West as parts of Nevada, Arizona and California may get dangerously hot temperatures starting Thursday and lasting through next week. In fact, by the end of the heat wave, we may see a record tied or broken for the hottest temperature ever recorded on Earth.

The furnace-like heat is coming courtesy of a “stuck” weather pattern that is setting up across the U.S. and Canada. Starting this weekend, the jet stream — a fast-moving river of air at airliner altitudes that is responsible for steering weather systems — will form the shape of a massive, slithering snake with what meteorologists refer to as a deep “ridge” across the Western states, and an equally deep trough seting up across the Central and Eastern states. 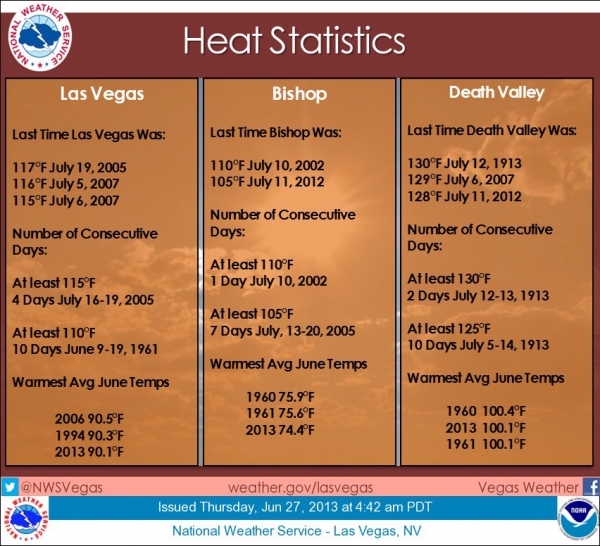 All-time records are likely to be threatened in normally hot places — including Death Valley, Calif., which holds the record for the highest reliably recorded air temperature on Earth at 134°F. That mark was set on July 10, 1913, and with forecast highs between 125°F to 130°F this weekend, that record could be threatened. The last time Death Valley recorded a temperature at or above 130°F was in 1913.

Las Vegas and Phoenix, two cities well-known for their hot and dry summers, are also predicted to approach all-time record territory. Last Vegas’ all-time high temperature record is 117°F and Phoenix’s high is 122°F. Excessive heat warnings are in effect in both cities from Friday through Monday.

“While hot temperatures are a regular feature in this part of the country, a heat wave of this proportion and duration is not common,” the NWS forecast office in Phoenix said on its website. “Several days at or near 100°F are common for the southwest Arizona [and] southeast California deserts in the summer. But periods of temperatures at or above 115°F are more rare.” 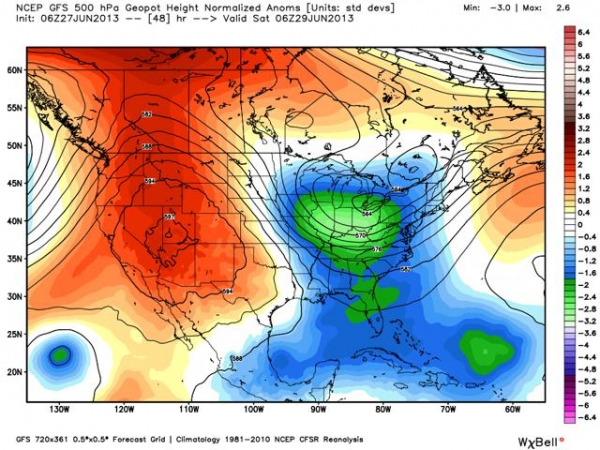 Forecast atmospheric pressure dpeartures from average (geopotential height anomalies) at about 18,000 feet for Saturday, June 29. The red area shows the “heat dome” or area of higher than average pressure, across the West.
Credit: Weatherbell.com

While each heat wave has ties to short-term weather variability, increasingly common and intense heat waves are one of the most well-understood consequences of manmade global warming, since as global average surface temperatures increase, the probability of extreme heat events increases by a greater amount. Data already suggests that heat waves have are becoming more common worldwide.

The heat in the West during the weekend and during the first week in July will also affect inland areas of Southern California and the state's Central Valley, where excessive heat watches and warnings have been issued for temperatures in the 100s Fahrenheit. The NWS said on Thursday that the strong heat dome may migrate northward through the 4th of July holiday, potentially locking the near-record high temperatures in place for a week or more, raising the risk of wildfires, and bringing a heat wave to places like Salt Lake City, Boise, Portland and Seattle.

The heat is also likely to aggravate already dire drought conditions in the Southwest. Fortunately, the hottest weather is not likely to affect Colorado and parts of New Mexico, where the largest wildfires have been burning to date. 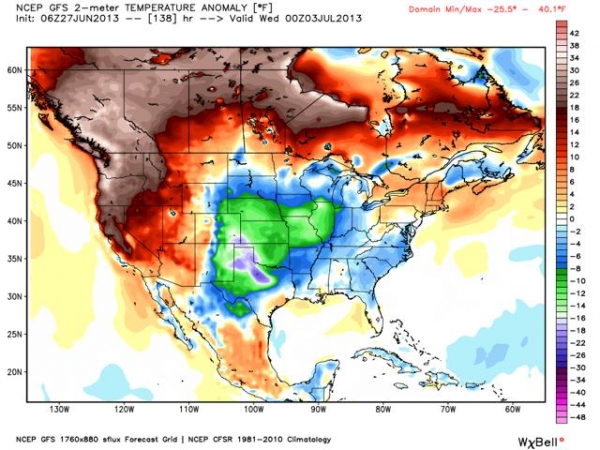 Forecast temperature departures from average on July 3, 2013, showing the migration of the heat wave into the pacific Northwest and Southwest Canada.
Credit: Weatherbell.com.

Such extreme heat also poses a major public health threat, since extreme heat is the No. 1 weather-related killer in the U.S. The NWS has warned that little relief from the hot temperatures can be expected at night, especially in urban areas, where temperatures may not drop below 90°F overnight.

At the same time, downstream from the heat dome, a sharp dip in the jet stream will help set up repeated rounds of heavy rainfall as well as cooler-than-average temperatures for Central and Eastern states, where flooding will be more of a concern than record heat.

Extreme weather events, from floods to drought to heat waves, are often associated with blocked or “stuck” weather patterns. Such features were present during the deadly Russian heat wave of 2010, the European heat wave of 2003, and more recently during Hurricane Sandy, and the Alaskan heat wave and related flooding in Canada, for example.

Some computer-model projections show the ridge of high pressure this week extending all the way northward into Alberta, Canada while the trough retrogrades, or moves from east-to-west, which is the opposite of the typical movement of weather systems in the northern hemisphere. Calgary, Alberta is beginning to recover from record flooding, and this weather means that the same area that just experienced a deluge could be in store for unusually hot weather, and the public health hazards that come along with it.

Some scientists think the jet stream in the Northern Hemisphere is becoming more prone to such extremes due to the changes wrought by melting Arctic sea ice from global warming, and it's an active area of scientific research.