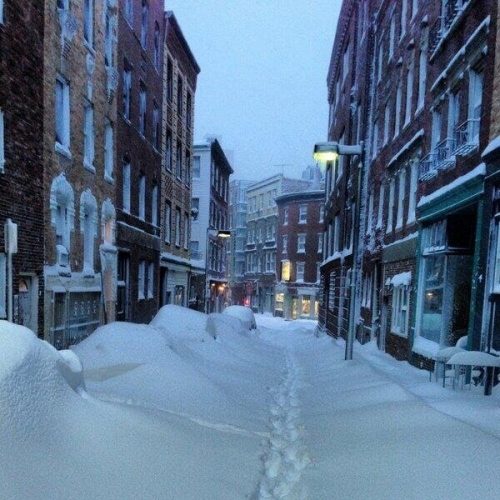 While the average annual snowfall in most parts of the world is indeed expected to decline, the extreme snowfalls — those that hit a place once every 10 or 20 years and can cause major headaches and economic impacts — may decline at a slower rate, and could even increase in particularly cold places, a new study detailed in the Aug. 28 issue of the journal Nature finds.

Essentially, in a warming world, there are “more muted changes in [the intensity of] snowfall extremes than in average snowfall,” said study author Paul O’Gorman, a climate researcher at MIT.

Because the amount of feet in an extreme snowfall would be so dependent on the place, O’Gorman defined extremes by return times, so storms that happen only once every decade or two, which takes subjective snow depths out of the equation.

O’Gorman was curious about what climate models would say about the future of extreme snowfall, as few studies have looked at it, unlike average snowfalls. He took advantage of simulations that had been run on 20 different climate models (under a scenario where greenhouse gas emissions increase throughout the 21st century) from centers around the world and did a statistical analysis to see what they projected for changes in average and extreme snowfall in the Northern Hemisphere by the end of the century.

The models suggested that the intensity of extreme snowfalls would decline less than the average annual snowfall in many regions. The exact numbers play out differently depending on the region, but, as an example: At low elevations (below about 3,330 feet) with monthly temperatures just below freezing, the average snowfall declines by 65 percent, but the intensity of extreme snowfall declines only 8 percent.

To picture what that means, let’s go back to those snow depths and return times (the numbers here are not from O’Gorman’s study and are an arbitrary example): If a 1-in-20 year snowfall event in Boston now would bury the city in, say, 3 feet of snow, that same event might dump only 2.5 feet of snow in a warmer late-century climate. But the average annual snowfall Boston might see would drop even more. To put that in terms of return times, a 3-foot snow there might become a 1-in-25 year event by century’s end.

While the return times hint at the frequency of such extreme snowfalls, and the intensity of snows are related to frequency, O’Gorman cautions that his study didn’t actually look at how often different regions might expect intense snows, just the amount of snow in, say, a 20-year storm.

The reason the change in intensity of extreme snowfalls seems to behave differently than the overall snowfall picture has to do with the physics that govern the formation of extreme snows. It seems that intense snows develop in a very narrow band of temperatures — it has to be cold enough that the precipitation won’t fall as rain, but can’t be so cold that the air doesn’t have enough moisture in it to fuel a blizzard.

In contrast, the snow that combines to give the annual total encompasses a much broader range of snow types that form under a wider swath of temperatures and so are more affected by warming. Essentially, in some places, less warming is needed to eat away at the temperature range that produces all snow than just the small range that accounts for extreme snows.

“It does make sense that when the overall climate is warming that your baseline snowfalls are going to decrease,” but you can still “pop a big snowstorm,” said David Robinson, the New Jersey state climatologist and the director of the Global Snow Lab at Rutgers University.

One caveat is that in particularly mild regions that already don’t see much snowfall, a sufficient amount of warming could knock out both the extremes and the average, O’Gorman said. (On the opposite end, places that are cold enough could actually see an increase in extreme snowfalls.)

Robinson, whose own research into snowfall trends hasn’t shown anything clear one way or the other, said that the study essentially investigates the amount of water content in snows (or what you’d get if you melted all the snow into water) and doesn’t address the issue of water content vs. snow depth. A very dense 2 feet of snow could be just as damaging as a greater depth of less dense snow, he said.

O’Gorman’s study is a starting point, and he said that future work needs to look into what the observations of snowfall show and investigate when different regions might start seeing this expected climate signal in extreme snowfalls.

“I think it’s important that people are looking at these individual variables,” Robinson said, because they help scientists get a sense of where to look for change and where not to expect as much. “It’s telling you where to go look.”

You May Also Like:
Can Birds Be Protected From Huge Solar Plants?
Antarctic Riddle: How Much Will the South Pole Melt?
Visualize It: Old Weather Data Feeds New Climate Models
Epic Drought in West is Literally Moving Mountains