A new University of Texas-Austin study shows that producing electricity from natural gas saves much more water than producing power from coal, even accounting for water lost in fracking for shale gas. 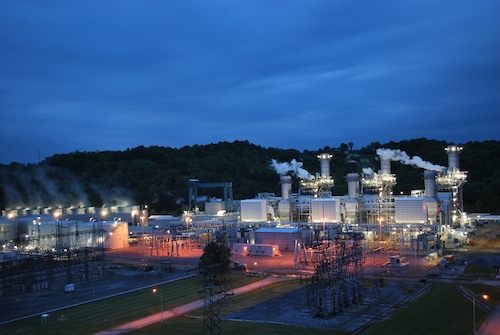 The study, funded by the state of Texas, looks at how Texas’ devastating 2011 drought affected electricity demand and power plant water consumption as compared to 2010. Texas is unique among states because its power grid is entirely isolated from the rest of the country. It also produces more electricity than any other state, about half of which is produced using natural gas, according to the study.

Hydraulic fracturing, or fracking, is a process used to extract natural gas from shale, often using millions of gallons of water, chemicals and sand per fracking operation to crack the shale deep underground and release trapped crude oil and natural gas into wells on the surface. The process is controversial because of the quantity of water fracking consumes in drought-stricken areas, fears about its impacts to underground water supplies and the possibility that leaks in the natural gas production and distribution systems could emit methane, a potent greenhouse gas fuelling climate change.

The study’s authors estimate that for every gallon of water used to frack for natural gas, Texas saved 33 gallons of water by using that gas for electricity generation rather than producing the same amount of power with coal. During the 2011 drought, if Texas’ natural gas-fired power plants had generated electricity with coal, the state would have consumed an additional 32 billion gallons of water, or enough to supply about 870,000 people with water, accounting for water used for fracking, according to the study.

The study projects that statewide water demand for electricity generation will fall continuously through 2030 as Texas continues using more renewables and natural gas for power generation.

The reason natural gas plants use less water and are therefore more resistant to drought is their flexibility and efficiency, said study lead author Bridget Scanlon, a senior research scientist in the Bureau of Economic Geology at the University of Texas-Austin.

Natural gas combined-cycle power plants use a steam turbine, which requires water to operate, in addition to two combustion turbines, which need no water for cooling. Widespread use of these natural gas plants, which use about one-third less water than plants that use only steam turbines, would reduce statewide water consumption while allowing the plants flexibility to complement wind power generated elsewhere in Texas, Scanlon said.

The flexibility of natural gas plants is critical in a drought, Scanlon said.

“If you look at drought vulnerability just from the water issues, which we did for this study, in each of the cases we found that the power plants had coping strategies,” she said. “They could switch cooling systems, they could switch generators.”

Vincent Tidwell, a Sandia National Laboratories hydrologist who has analyzed drought’s impacts on electricity production in Texas, said the study is important because it raises public awareness about the water needs of various kinds of electric power production technologies.

“When you talk about drought resilience, you’ve got to be careful about the way you think about it,” he said. “Yes, even when you bring in issues of the hydraulic fracturing, natural gas from the big picture is a much better choice from a water consumption standpoint than a traditional coal plant or traditional nuclear plant.”

For example, he said, a new natural gas-fired power plant could replace a coal plant in an area where water supplies are adequate. But the natural gas for the new plant could come from an oil and gas field far away in a dry area where no previous demand for water existed.

That could create drought vulnerability in a local area even though natural gas power may consume less water than coal statewide, he said.

Scanlon’s study, “Drought and the Water-Energy Nexus in Texas,” was published this week in the journal, Environmental Research Letters.