LONDON – The Food and Agriculture Organization (FAO) estimates the direct cost to producers of food that goes to waste is currently $750 billion annually, a figure that excludes wasted fish and seafood.

But the FAO says the waste not only causes huge economic losses but is also doing very significant damage to natural resources – climate, water, land and biodiversity. 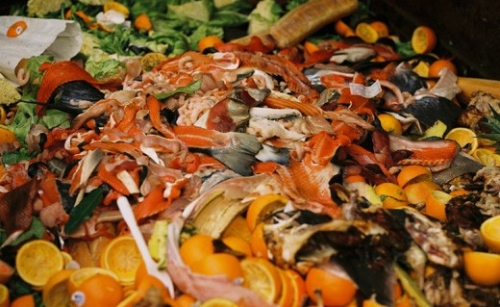 Without accounting for greenhouse gas emissions from land use change, the carbon footprint of food produced and not eaten is estimated at 3.3 billion tons.
Credit: Taz/Wikimedia Commons via Climate News Network.

It says its report, Food Wastage Footprint: Impacts on Natural Resources, is the first study to analyze the impacts of global food waste from an environmental perspective.

The authors say: “Without accounting for greenhouse gas emissions from land use change, the carbon footprint of food produced and not eaten is estimated at 3.3 Gigatons [billion tons] of CO2 equivalent: as such, food wastage ranks as the third top emitter after the USA and China.

“Globally, the blue water footprint (i.e., the consumption of surface and groundwater resources) of food wastage is about 250 cubic kilometers, which is equivalent to the annual water discharge of the Volga river [in Russia], or three times the volume of [Switzerland's] Lake Geneva.

“We simply cannot allow one-third of all the food we produce to go to waste or be lost because of inappropriate practices, when 870 million people go hungry every day,” said the FAO’s director-general, José Graziano da Silva.

The FAO has also published a comprehensive tool-kit as a companion to the study; it contains recommendations on how to reduce food loss and waste along the food chain, and details projects around the world that are seeking to tackle the problem.

The FAO and the UN Environment Program are founding partners of the Think Eat Save – Reduce Your Foodprint campaign, which was launched earlier this year and which aims to help to co-ordinate worldwide efforts to cut wastage.

The study says 54 percent of global food wastage occurs during production, post-harvest handling and storage, and 46 percent at the processing, distribution and consumption stages.

As a general trend, developing countries suffer more food losses during the production stages, while food waste at the retail and consumer level tends to be higher in middle and high-income regions. 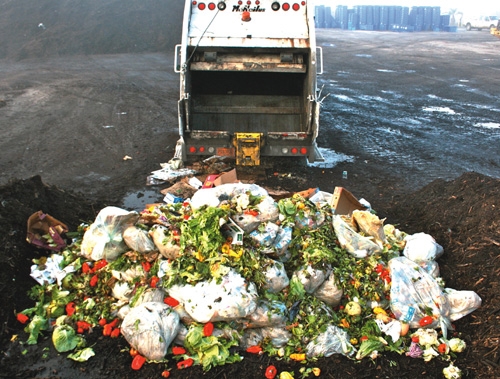 The report says that the later a food product is lost along the chain, the greater the environmental consequences, since the environmental costs incurred during processing, transport, storage and cooking must be added to the initial production costs.
Credit: Biocycle.net

The report says that the later a food product is lost along the chain, the greater the environmental consequences, since the environmental costs incurred during processing, transport, storage and cooking must be added to the initial production costs.

Fruit wastage contributes significantly to water waste in Asia, Latin America, and Europe, and large volumes of vegetable wastage in industrialized parts of Asia and Europe mean a large carbon footprint for the sector.

Wastage of cereals is a significant problem in Asia, affecting carbon emissions as well as water and land use. Rice is a particular problem: paddy fields account for around 20 percent of human-related emissions of methane, a potent greenhouse gas, and a significant amount of rice is wasted.

Uneaten food that ends up rotting in landfills is also a large producer of methane, although there is another use to be made of it which can offer worthwhile returns. A British company is among those who are profiting by exploiting them.