LONDON — Societies all over the planet are running out of holes in the ground in which to dump their waste, so they’re under increasing pressure to find alternative solutions.

In the European Union one of the problem wastes is food — rich people buy too much in the supermarket and throw a lot away. This is a disaster for local authorities that have to find a way of disposing of it, and a problem for the planet because rotting food produces large quantities of methane, a global warming gas 23 times more potent than carbon dioxide.

Pressure to do something about the problem has been increased by ever-growing taxes on local authorities and companies who throw away waste in landfill, making it more expensive every year to rely on holes in the ground. 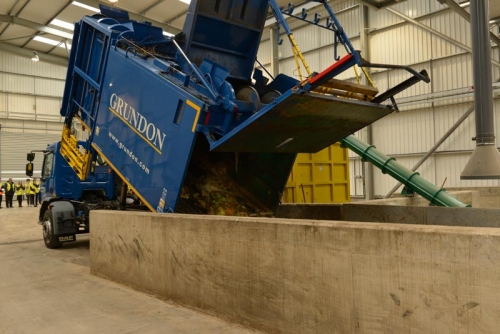 A successful solution to the problem has been found in Oxfordshire in England, which not only solves the waste problem but also produces gas to provide electricity and fertilizer for local farmers. One of the local authorities involved is the Royal Borough of Windsor and Maidenhead, which collects the food waste from Windsor Castle, one of Queen Elizabeth’s favorite homes.

Each household in the borough puts its food waste into containers provided by the borough, which then collects them, takes them to a processing plant and turns the contents into a thick soup. Other organic waste from food processors, large supermarkets, restaurants and green waste from forestry, which would also go to landfill, is added to the mixture.

This is then fed into a sealed container, called an anaerobic digester, which is designed to allow bacteria — in the absence of any oxygen — to eat the waste, producing methane in the process. The methane is extracted, cleaned and used to generate electricity.

For Rich and Poor Alike?

When the bacteria have done their job all that’s left of the food is a carbon-rich fertilizer prized by farmers. The entire process takes about 100 days, so a whole series of digesters is needed to keep up with the flow of waste and to provide a regular supply of gas to the electricity turbines.

The plant, not far away at Wallingford in Oxfordshire, processes 45,000 tonnes of waste a year and cost £10 million ($13 million) to build. It produces 2.3 megawatts of electricity annually, enough to meet the needs of over 4,000 average British households.

Each year it produces enough fertilizer for 2,500 acres of local farmland, replacing fertilizer made from fossil fuels, a further saving of greenhouse gases. The company that runs the plant, Agrivert Ltd, claims that it avoids the release of 22,000 tonnes of carbon dioxide annually. Agrivert runs a second plant nearby, which produces 2.1 MW.

The big question is whether this system can be used globally, or just in rich societies. Agrivert points out that poor people don’t throw food away — and in any case it’s always cheaper to chuck waste in a hole in the ground or in the river, especially if the person throwing it away does not have to pay the clean-up cost. 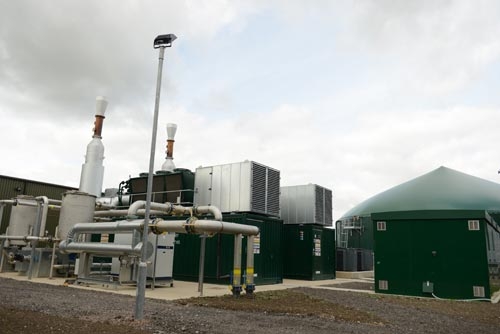 But it is not just waste food that can be treated in the digesters. Most organic waste from food processing and forestry and other green wastes can be put in them, converted to gas and used to make electricity and fertilizer. Alexander Madden, Agrivert’s chief executive, says palm, coffee, and banana plantations all produce waste that is ideal for digesters.

Hylton Murray-Philipson, one of the company’s founder shareholders, says: “The technology can be applied anywhere, but you need the regulatory framework at both ends of the process, to make sure a steady supply of waste is collected for the digesters and that there is a market for the electricity at the end of it.”

In Britain, he said, the company had 20-year contracts to provide the service and to sell the electricity. It had been so successful that it had made the Oxfordshire local authorities taking part in the scheme among the top ten best recycling authorities in Britain.

At the moment Agrivert has its two plants up and running in Oxfordshire providing electricity for 8,000 homes, with another under construction in Surrey. Other companies are also building plants elsewhere in Britain and many other EU countries as a way of disposing of this difficult waste, but until now British government help has been lacking.

This month, however, the Government’s new green investment bank said it was considering investing £50 million ($65.6 million) in new projects. This could create 35,000 jobs and help produce 10 percent of the country’s gas needs.

Mr. Madden says the growth potential of digesters will ultimately be limited by the amount of waste available, about four million tonnes a year in Britain, enough to feed 150 medium-sized plants. At the moment only 25 have been built.