Rising carbon dioxide levels in oceans adversely change the behavior of fish through generations, raising the possibility that marine species may never fully adapt to their changed environment, research has found. 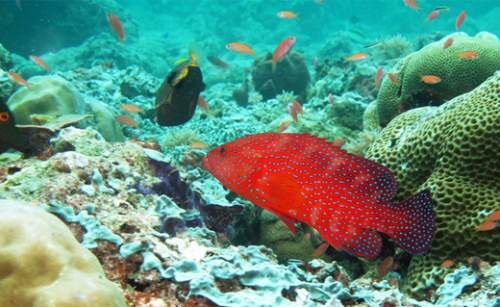 Rising CO2 levels result in ocean acidification which makes it hard for crustaceans to form shells, while corals are more prone to bleaching.
Credit: J.P. Lawrence/flickr

The study, published in Nature Climate Change, found that elevated CO2 levels affected fish regardless of whether their parents had also experienced the same environment.

Spiny damselfish were kept in water with different CO2 levels for several months. One level was consistent with the world taking rapid action to cut carbon emissions, while the other was a “business as usual” scenario, in which the current trend in rising emissions would equate to a 3°C (5.4°F) warming of the oceans by the end of the century.

The offspring of the damselfish were then also kept in these differing conditions, with researchers finding that juveniles of fish from the high CO2 water were no better than their parents in adapting to the conditions.

This suggests that fish will take at least several generations to cope with the changed environment, with no guarantee they will ever do so, meaning several species could be at risk of collapsing due to climate change.

The research was conducted by the ARC center of excellence for coral reef studies, based at James Cook University in Queensland.

Previous studies by the center have found that rising CO2 levels in the oceans directly alters neuron transmitters in fish brains, modifying their behavior. Their sense of smell is hindered, as well as their wariness, meaning more are picked off by predators.

More than 90 percent of the excess CO2 in the atmosphere, primarily caused by the burning of fossil fuels, is soaked up by the oceans.

When CO2 is dissolved in water it causes ocean acidification, which slightly lowers the pH of the water and changes its chemistry. Crustaceans can find it hard to form shells in highly acidic water, while corals are more prone to bleaching.

Professor Philip Munday, a co-author of the study, told Guardian Australia the research suggested fish would not be able to adapt to climate change in the short term.

“How quickly that adaptation will take, we don’t quite know,” he said. “But we do know that projected future CO2 levels will seriously affect the behavior of fish in ways that won’t be good for populations. It will take longer than a few generations for fish to genetically adapt and we don’t know if they can keep pace with the change.

“If they can’t keep pace, it will have a significant effect on the population sustainability in some species of fish. We worked on reef fish, but there’s nothing to say that whole ranges of other species won’t be affected.

“This is certainly a warning that there is no quick fix for fish. We need to reduce carbon dioxide emissions and we need to do more to understand whether genetic adaptation can kick in over time.”