The Grand Canyon was once targeted as a major dam site by the federal government, a project eventually scuttled after widespread protest. Nobody is revisiting the idea of a dam there, but a new U.S. Department of Energy report shows that the Grand Canyon and other major gorges and rivers across the U.S. may be ideal for hydropower development.

The DOE study suggests America’s rivers are troves of vast untapped hydropower potential and developing many of them could help combat climate change by using renewable energy to reduce reliance on coal-fired power plants that emit climate-changing greenhouse gases. 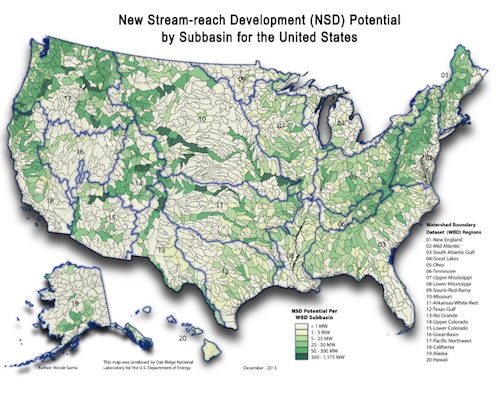 In all, undeveloped rivers and streams in the U.S. have 84.7 GW (gigawatts) hydropower capacity, enough to generate 460 terawatt hours of electricity annually. Subtracting protected areas such as the Grand Canyon, the U.S. has 65 GW of untapped hydropower capacity, if all the streams with hydropower potential were eventually developed, according to the DOE study.

One gigawatt of hydropower can provide electricity for more than 700,000 homes. Currently, hydropower totals 7 percent of total U.S. electric power production, and full build-out of all the sites that would total 65 GW of capacity would nearly double total U.S. hydropower generation, according to the DOE.

In 2011, the U.S. had 79 gigawatts of hydropopwer generating capacity, according to U.S. Energy Information Administration data, roughly enough capacity to generate electricity for more than 59 million homes. Hydropower generation is variable, however. In 1984, the Hoover Dam on the Colorado River generated enough power on its own to provide electricity for 700,000 homes because the water level of Lake Mead behind the dam was at its highest point on record. But since 1999, water levels have dropped significantly, and Hoover Dam produces electricity for only about 350,000 homes.

While it is highly unlikely that the U.S. would ever fully build out its hydropower potential because of high regulatory hurdles and the environmental consequences of damming or diverting water from rivers or expanding existing hydropower facilities, the DOE is suggesting that at least some development will help reduce reliance on fossil fuels for electric power generation.

The study is intended to make data available to utilities, project developers and local communities so they can do a site-specific analysis using data on power-producing potential of streams and accompanying environmental factors so they can move ahead with development in an environmentally sustainable manner, DOE spokeswoman Nikita Kumar said. 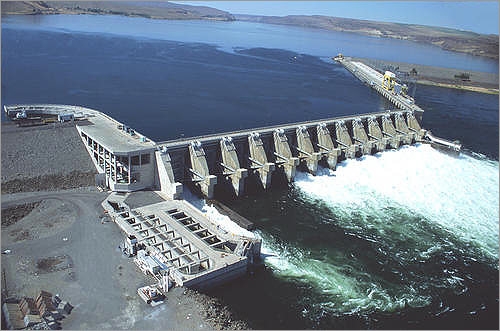 The DOE’s website about the study says the agency isn’t recommending any new hydropower development at any specific location. National parks were excluded from the final tally of U.S. hydropower generating potential.

In figuring out how much untapped hydropower potential exists in the U.S., researchers at the DOE’s Oak Ridge National Laboratory in Tennessee analyzed the topography, hydrology and other stream characteristics to determine electricity generating potential for all undeveloped stretches of rivers and streams throughout the country. Some of the streams and rivers the DOE analyzed include some of the West’s largest, including major portions of the Rio Grande, Snake, Columbia, Colorado, Arkansas, Missouri, and North and South Platte rivers, among many others.

Water availability and water flow in certain rivers in the future is a difficult thing to predict, and the hydropower generating capability of a river depends a great deal on stream flow.

“We should expect a fair amount of temporal variability in power generation in much of the U.S., and particularly in the Northwest, from season to season and from year to year,” said Alison Cullen, an energy researcher at the University of Washington's School of Public Affairs in Seattle. “For our region, this is due to our seasonal precipitation and flow situation.”

More hydropower is generated during the spring and early summer when melting mountain snowpack swells rivers far below, and that's directly affected by climate change, she said.

“Warming in our region in the wintertime would lead to less storage of precipitation in the snowpack and more water entering the river system directly,” she said. “The form in which our precipitation falls and the exact timing has a huge impact on hydropower potential regardless of the development of the resource.”

Additionally, developing hydropower along rivers where no development exists is often controversial because of its environmental impact, just as damming the Grand Canyon was 50 years ago.

“Capturing more virgin waterways is likely going to be quite a political, economic and regulatory challenge,” Ronald Stork, senior policy advocate for Friends of the River, a river advocacy group based in Sacramento, Calif., said in an email, adding that new hydropower will likely be used to supplement other renewables such as wind and solar.

“That’s an important contribution to CO2 emission reduction in the electricity sector which should not be discounted. But doubling hydropower production the old-fashioned way, I don’t think so,” he said.