In Much of U.S., Extreme Cold is Becoming More Rare

The deep freeze that continues to affect the U.S. has resulted in numerous daily temperature records, and some all-time cold temperature records. But in general, this Arctic outbreak, courtesy of a huge chunk of the polar vortex that the jet stream temporarily dislodged from the Arctic, is bringing the coldest temperatures in 20 to 30 years to many areas of the Midwest, Ohio Valley, Deep South, and the eastern seaboard. 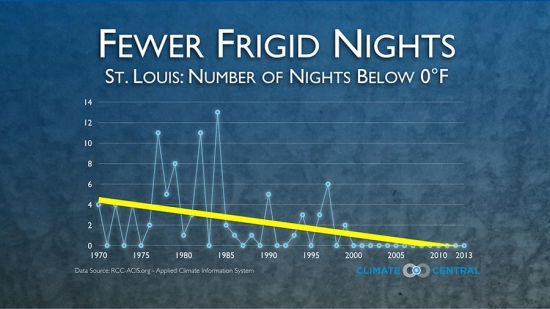 Trend in frigid nights in St. Louis from the 1970s to the most recent decade. Yellow line indicates linear trend since 1970.
Click to enlarge the image. Credit: Climate Central.

Some of the most severe cold has affected the Midwest, from Minnesota to Illinois and east to Michigan. Chicago set a record for the 7th coldest noontime temperature since 1930, with a temperature of just -14°F at midday on Monday. But the city did not set any all-time cold records.

While the cold temperatures have been unusual and even deadly, climate data shows that intense cold such as this event is now occurring far less frequently in the continental U.S. than it used to. This is largely related to winter warming trends due to manmade global warming and natural climate variabiility.

Climate Central calculated the number of nights below a specific temperature threshold for dozens of U.S. cities based on the local climatology and current weather conditions. The calculations encompass the entire winter season, and show that overall there is a downward trend in the number of extreme cold nights like we’re currently experiencing – although there are variations in a few cities. This trend is consistent with climate studies showing that overall, winters across the contiguous U.S. have warmed by .61°F per decade since 1970, and every region has warmed at least somewhat over that time. 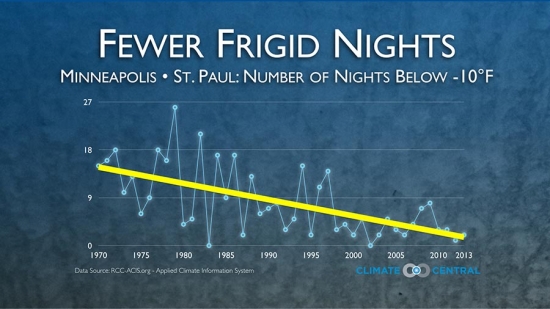 Trend in frigid nights in Minneapolis-St. Paul from the 1970s to the most recent decade. Yellow line indicates linear trend since 1970.
Click to enlarge the image. Credit: Climate Central.

For example, in Minneapolis in the 1970s (1969-79), there were an average of 14.7 nights with temperatures below minus 10°F. But in the past decade (2002-2012), that number has fallen dramatically, to about 3.8. The calculations run from July through June of the following year, so that we wouldn't break up the winter season.

In Detroit in the 1970s, there were an average of 7.9 nights with temperatures below zero degrees. But now, that number is closer to 2 nights. And in Washington D.C., the number of nights with a low of 20 or below was 13.5 in the 1970s, but was closer to 8.3 in the past decade. The overnight low at Reagan National Airport on Jan. 7 was 6°F. 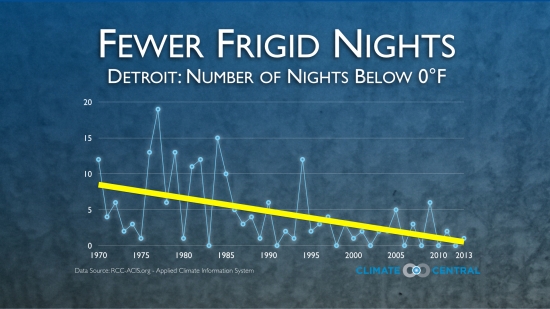 Trend in frigid nights in Detroit from the 1970s to the most recent decade. Yellow line indicates linear trend since 1970.
Click to enlarge the image. Credit: Climate Central.

And in St. Louis, the 1970s featured an average of 3.8 nights with a low of 0°F or below, yet in the past decade, the average for such frigid nights fell to zero.

A Climate Central analysis released in February 2013 found that the states with the coldest winters have been warming the fastest, including states hard hit by the current cold snap. The top 5 fastest-warming states, the analysis found, were Minnesota, North Dakota, Wisconsin, Vermont and South Dakota.

Beyond the U.S., the big picture which shows that global temperatures are on the rise. The rate of warming may have slowed over the last 15 years, but even so, each of those years was warmer than the 20th century average. In fact, it has now been 345 consecutive months and counting where global average temperatures have been above the average for the last century (as of November, that is — numbers for December have not yet been finalized). And there is ongoing research that suggests that rapid Arctic warming, which has been linked to human-caused global warming, may be creating more amplified weather patterns like the one that we are currently seeing, with sharp curves in the jet stream steering weather systems in unusual ways. If that hypothesis is true, we could actually experience more extreme cold snaps, even as the planet continues to warm.