Energy and climate change are figuring prominently in the news on the other side of the warming and acidifying pond this week. European leaders are set to meet on Thursday and Friday to decide how aggressively their countries will work toward slowing global warming.

“It's a big week for the EU,” said Tim Nuthall, spokesman for the European Climate Foundation, a nonprofit that works to slow the rise in greenhouse gas pollution. “This will be a landmark decision that has big consequences, both domestically in the E.U. and internationally.”

The EU 2030 climate framework talks aren’t getting much airtime in the U.S., though, so you might have questions about them. That’s OK, because we’ve got answers. 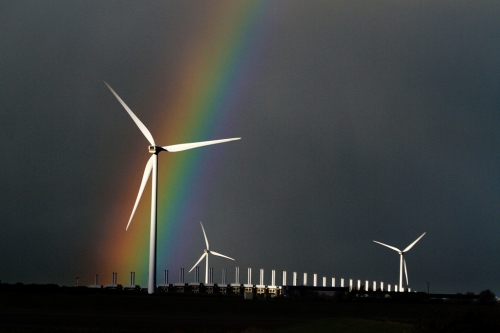 How do you make a European scoff?

Try gushing to them about President Obama’s year and a half-old leadership on climate change. Most of Europe has treated climate change as a serious matter for decades, while the U.S. spent most of that time regarded as a global pariah on the issue.

In 2007, European Union leaders committed to reducing greenhouse gas emissions by 20 percent below 1990 levels by 2020. The EU is on track to comfortably surpass those goals, in part because of aggressive renewables programs and in part because of a widespread recession.

(For comparison, the U.S. might achieve the less ambitious goal, set in 2009 by President Obama, to produce 17 percent less greenhouse gas pollution in 2020 than was the case in 2005.)

Under its goals for 2020, the European Union also aims to produce at least 20 percent of its electricity from renewable sources and to improve its energy efficiency by 20 percent. There are so many twenties here that the plan was dubbed 20-20-20.

Super. So what’s left to decide?

The future beyond 2020, and beyond 20-20-20. During meetings in Brussels this week, the European Council is set to decide on its climate commitments for 2030. The European Commission has proposed a 40 percent reduction in greenhouse gas emissions in 2030 compared with 1990 levels. Renewable energy and energy efficiency goals will also be negotiated.

Environmental and clean energy groups and some EU countries, including Sweden and Germany, want Europe to go further — perhaps a 50 percent reduction. Some coal-burning and less developed members of the EU, most notably Poland, have been angling for a less ambitious target.

After China and the U.S., the European Union is the world’s third-biggest greenhouse gas polluter. Its 28 member states release about 4 billion tonnes of CO2 every year, which is a sixth of the world’s total. Those countries are home to 500 million people — about one fourteenth of the world’s population.

According to numbers compiled by the Global Carbon Atlas, the average European Union resident is responsible for a little less than half as much greenhouse gas pollution as an average American or Canadian. Each European produces slightly less climate-changing pollution than an average Chinese resident (though it’s worth noting that most of China’s pollution is caused by industry manufacturing products for export), and four times as much as the average Indian. 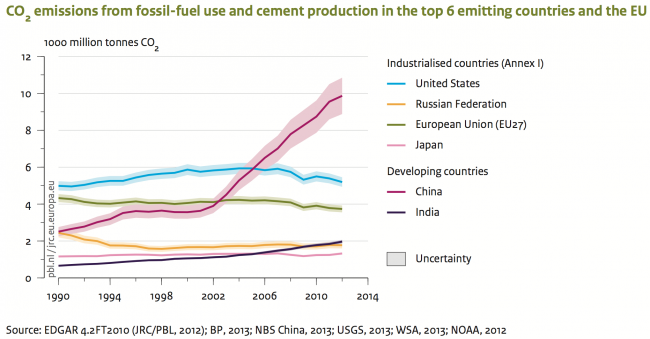 Would all EU countries have to commit to the same reductions?

No. Meetings this week are also supposed to figure out how responsibility for meeting the EU’s new pollution reductions will be divvied among its member countries. Some countries might accept commitments that go beyond the average; others might do the opposite.

Jim Skea, a vice-chair of the Intergovernmental Panel on Climate Change, told the BBC that a pollution reduction of 40 percent by 2030 would be “too little, too late,” if the EU wants to meet those 2050 goals. The office of Connie Hedegaard, European Commission’s climate action commissioner, disagrees.

How would this week’s decisions affect the UN climate negotiations?

Under a global climate pact due to be finalized at meetings next December in Paris — which is supposed to cap global warming at 2°C, or 3.6°F — each “party” to the United Nations process, such as the U.S. and the EU, is expected to commit to a reduction in greenhouse gas levels. (Or, in the case of India, for example, to perhaps do something about slowing its rise in emissions). The decisions made this week will shape Europe’s commitments under this upcoming international treaty. And that, in turn, could shape commitments made by other countries.

“We hope that the Europeans keep leading,” Jake Schmidt, the director of the Natural Resources Defense Council’s international program, told Climate Central. “The international effort has been very dependent on Europe pulling the rest of the world.”